Veterans are hitting fairways and greens to ease trauma 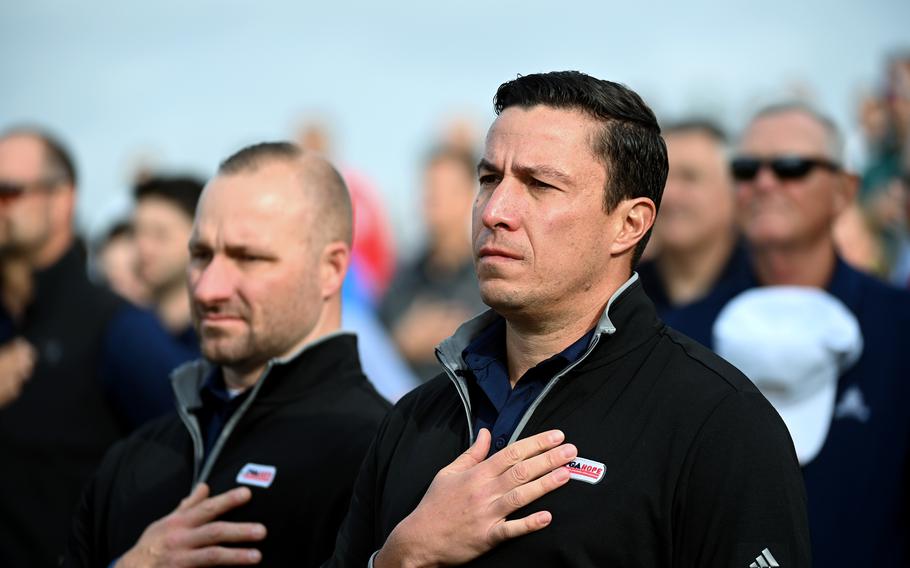 Christopher Cordova, center right, and other veterans stand at attention as the national anthem is sung at the PGA Hope event at Congressional Country Club in Bethesda, Md., on Monday, Oct. 17, 2022. (Katherine Frey/The Washington Post)

WASHINGTON — Christopher Cordova was a captain in the U.S. Army in 2009 stationed in a remote region of northern Afghanistan when during the predawn hours of Oct. 3 hundreds of Taliban soldiers, armed with machine guns and rocket-propelled grenades, attacked Combat Outpost Keating from surrounding mountain positions.

Under heavy fire, Cordova performed a blood transfusion for hours on the battlefield to keep alive a severely wounded soldier.

Cordova, 43, since has retired from the military as a major but often reflects upon the Battle of Kamdesh, even while on the golf course, where the Silver Star medal recipient embraces the therapeutic components the sport can provide to soldiers with physical or cognitive issues.

The native of Mechanicsville, Md., was among 20 veterans from across the country invited to participate in Monday's PGA Hope (Helping Our Patriots Everywhere) outing at Congressional Country Club. The event included players of varying skill levels from all branches of the military for 18 holes at the iconic venue in Bethesda, Md., that has hosted major tournaments, including the U.S. Open, PGA Championship and Women's PGA Championship.

"The dichotomy is something that I try to talk about," Cordova said. "Like I've been in some of [the] most terrible situations in the world, the worst places on the planet, and those images are with me. They're not gone, and I vividly remember those locations.

"Yet here I am at another point in my life at one of the most pristine, exclusive country clubs in the country. Life is crazy." Cordova, an orthopedic physician assistant based in Colorado, serves as a PGA Hope ambassador, helping to grow interest in golf and its healing properties to veterans who otherwise might not be aware. PGA Hope is the flagship military program of PGA Reach, the charitable arm of the PGA of America.

The rehabilitative program engages with more than 7,500 veterans at 215 locations annually, according to PGA Hope. Congressional has hosted a PGA Hope tournament since 2017 and is scheduled to do so through 2037, when the Ryder Cup is contested there for the first time.

Cordova and the other ambassadors from across the country spent a week in the D.C. suburbs learning specialized techniques required to assist veterans with post-traumatic stress disorder, traumatic brain injury and other forms of trauma in assimilating back into their communities through golf.

Like many amateur golfers, the game challenges Cordova's ability to temper his reactions from shot to shot.

"I take a look back after a round, and I'm like, 'Man, I really don't like how I responded to that situation,'" Cordova said. "It really has helped me dial in, get back to an even-keeled manner, which I always strive to be, instead of letting the highs and lows take control of my emotions."

Chris Nowak, a 57-year-old who served as a corporal in the Marine Corps, first struck a golf ball after having his right leg amputated from a training accident in 1987 while teaching a course in San Antonio. Since 2017, he has been military and veterans liaison for PGA Hope.

In high school, Nowak gravitated to ice hockey in part because of the rush he'd get from violent collisions. He dismissed golf as too serene.

The injury left him feeling isolated, distanced from the sports he loved to play. At the time, there were limited veteran services, and PGA Hope didn't exist.

"It was a hard transition," Nowak said. "I really didn't have much going on in my life after losing my leg. Always thought I was going to be athletic and woke up one day after being shot up, and I don't have a leg. What are you going to do?

"I was left out there alone."

So one afternoon Nowak, on a whim and unprompted by anyone with an association to the game he shunned in his youth, decided to go to a local practice range.

From the moment the club hit the ball, Nowak recalled becoming hooked and eager to pass along the sport's restorative benefits to other injured veterans. "I really needed to get something in the mental space," he said before teeing off Monday in a group that included Cordova. "Played golf one day, and I was like, 'Wow, this works. I've got to do something with it.' It just clicked with me, and I knew the therapeutic value in this game is what veterans need."

The calm veterans can experience through golf initially drew Judy Alvarez, a PGA of America teaching professional, to the program. The director of instruction at Monarch Country Club in Palm City, Fla., has been working with injured combat veterans for close to 15 years.

Alvarez aided in the establishment of a half dozen PGA Hope programs in South Florida. In 2019, the PGA of America presented her with the Patriot Award, given annually to the PGA member who goes above and beyond in a commitment to veterans through golf.

Although not a veteran herself, Alvarez has family members who served in the U.S. Navy. She has also witnessed firsthand how wounded soldiers have been uplifted from the simple acts of swinging a club, regardless of where the ball ends up, and walking along a fairway during a sun-swept morning, much like Monday at Congressional.

"When you hear a veteran who's been dealing with suicidal thoughts and is paralyzed from the waist down," Alvarez said, "and they're in the middle of their backswing, and they go, 'This is a really great day, thanks for putting this on,' and he goes, 'I haven't felt this at ease for a long time,' then you've done your job."

Veterans dealing with trauma can get more information about PGA Hope programs by going to www.pgareach.org.