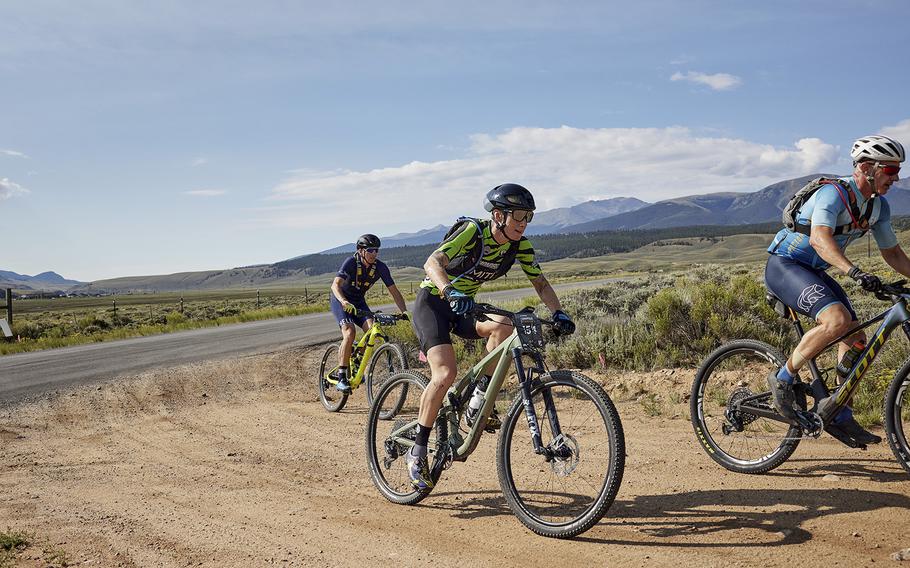 Rach McBride competes in the Stages Cycling Leadville Stage Race in Colorado in July 2022. (Stephen Speranza for The Washington Post)

It would be easy to look at professional triathlete Rach McBride and assume they always feel at home at a starting line. They've placed at world championship races, won Ironman 70.3 (half Ironman) races and conquered the field at gravel cycling races. But until last year, that wasn't the case. Despite a long, impressive list of titles and accomplishments, McBride (they/them), a 44-year-old Canadian, always felt a bit out of place when lining up. At the 2021 Big Sugar Gravel race in Arkansas, however, everything changed.

Big Sugar was the first event in which McBride had the opportunity to race in a nonbinary category. The event, says McBride, was nothing short of life-changing.

"For a person outside the gender binary, it can be really dysphoric to have to check an 'M' or 'F' box on a registration form, be misgendered at a start or finish line, to have to use gendered spaces like bathrooms and change rooms because there is no other option," says McBride, who previously raced in the female category and came out publicly in the endurance world as nonbinary in 2020. "You feel invisible, out of place and invalidated."

Big Sugar is part of the 30-plus endurance racing events under the umbrella of Life Time Athletic Events. Races include road-running, trail-running, triathlon, gravel cycling and road cycling, many of them long-established, popular events. As of 2021, all of them included a nonbinary category.

Although Life Time might be the largest such organization offering a nonbinary division, it's not the only one. In 2021, the Philadelphia Distance Run, a popular half-marathon, added the division. New York Road Runners, which sponsors low-key races and major events such as the New York City Marathon, officially added the division, too. And in June, for the first time in its 41-year history, the Escape From Alcatraz Triathlon offered a nonbinary option. Endurance races of all stripes are making gender inclusion a bigger priority.

The origins of the movement by endurance race organizations to add a nonbinary category is uncertain, but for Life Time, it started with a conversation in early 2020, just before the pandemic hit.

"We were talking about our diversity and inclusion efforts, what we had done in that regard and what else we needed to do," says Michelle Duffy, the director of event marketing. "We had a couple of hours together where we discussed what it meant to be nonbinary, and honestly, it was the first time we had dug in to truly understand it." 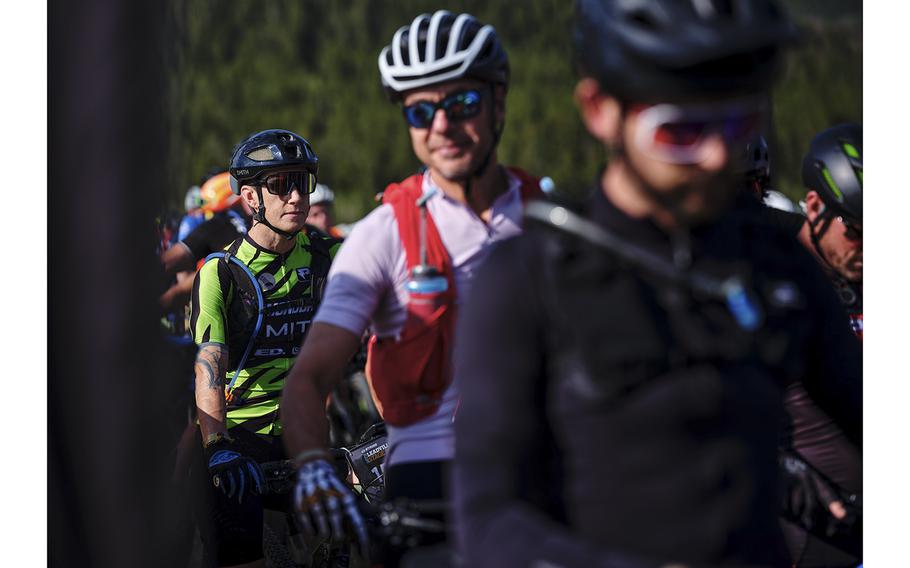 Rach McBride, in green shirt, at the starting line on Day 3 of the Stages Cycling Leadville Stage Race in Leadville, Colo., on July 31, 2022. (Stephen Speranza for The Washington Post)

Research from the GLAAD's Accelerating Acceptance 2021 study reveals that, in the general public, there is a growing familiarity with nonbinary and transgender people. Some 81% of the report's non-LBGTQ survey respondents say they expect nonbinary and transgender people to become a more familiar part of life. Still, in the endurance racing world, categories other than binary male and female have long been absent.

Coming out of that 2020 meeting, however, the Life Time team determined that it was time to step up and make their events more inclusive. The event producer didn't make an official announcement about the new race division but simply worked it into its registrations across the board.

"We felt like it was the right thing to do, not something that needed a big splash or marketing," Duffy says. "What it comes down to for us is that people race endurance events as an escape. Everyone should be able to view the outdoors as a welcoming space."

Despite the lack of deliberate fanfare, however, Life Time was onto something. The first race in its series after adding the nonbinary category was its Unbound Gravel 100-mile event in Kansas. Abi Robins, a nonbinary athlete, became the first to sign up in the division, earning a spot on the podium. When Robins posted photos on social media, the news took on a life of its own. Life Time began to hear from other race organizers who wanted to offer the same opportunities to athletes. (Life Time allows transgender women to compete in the female category if they "can provide documentation . . . [that they have] been undergoing continuous, medically-supervised hormone treatment for gender transition for at least one year prior to the date of the race." Transgender men face no restrictions.)

One year after Robins represented as the only nonbinary athlete at Unbound, 17 athletes signed up in the category in this year's 200-mile event. McBride was one of them, taking the top spot in the nonbinary division with a time of 11 hours and 56 minutes. "It feels like a new family, because we've all come from this place of feeling outside," McBride says. "To be validated and have the space to compete together is pretty profound."

Justin Solle (they/he), a 27-year-old New York-based program manager, understands what McBride is saying. A runner for about 10 years, Solle came out as nonbinary eight months ago and began registering in the division at races sponsored by New York Road Runners and Front Runners New York (an international LGBTQ running club). "Seeing the existence of the category allowed me to feel empowered and to come out with my running group," they say. "It's beautiful to see how the nonbinary community is growing and coalescing around the category." 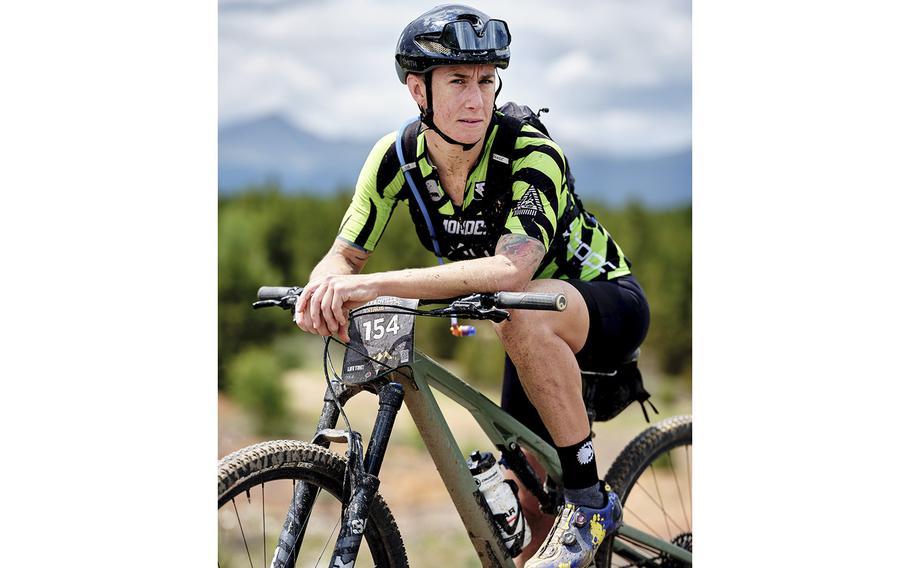 “For a person outside the gender binary, it can be really dysphoric to have to check an ‘M’ or ‘F’ box on a registration form, be misgendered at a start or finish line, to have to use gendered spaces like bathrooms and change rooms because there is no other option,” says Rach McBride, who previously raced in the female category and came out publicly in the endurance world as nonbinary in 2020. “You feel invisible, out of place and invalidated.” (Stephen Speranza for The Washington Post)

The addition of the nonbinary division in these New York-based races can be traced to efforts by the Front Runners New York (FRNY) in 2019; FRNY allows participants to self-identify for gender. "We started by offering the option to become a member or renew a membership as nonbinary," says Gilbert Gaona (he/him), the group's president. "Then we worked with our timing company to add the category in races."

Since 2021, the division has existed in every FRNY event, and the club successfully partnered with the New York Road Runners (NYRR) to do the same, including in its 50,000-runner strong New York City Marathon. Gaona estimates there were around 16 nonbinary finishers at last fall's event. "We have had a great relationship with the NYRR," he says. "They rolled out the option with our very own Pride Run, and we've felt supported by them."

Even with all the progress, the rollout of nonbinary divisions at many endurance events has not been without bumps in the road. For their part, McBride would like to see more triathlons add the option. "I feel optimistic, but progress is moving at a snail's pace," they say. "After my experience at Unbound, I realize that I'm trying to be a professional athlete on the world stage, and also advocate for inclusivity. It's a lot to take on, but it's lit a fire under me to push more for triathlons to add the category."

Other issues to address include timing and scoring for qualifying events such as the Boston Marathon. "We have a nonbinary member who was fast enough to qualify for Boston in both the male and female categories," Gaona says. "But there are no standards for nonbinary runners, so they would have to choose a binary category in order to race."

And sometimes, even with nonbinary divisions in an event, a race announcer will misgender an athlete as they come across a finish line. "It doesn't make me mad, but it's a reminder that the community is still working to figure things out," Solle says. "The more we can come together and be loud and proud, the more attention we can draw, so that people can see us for who we are."