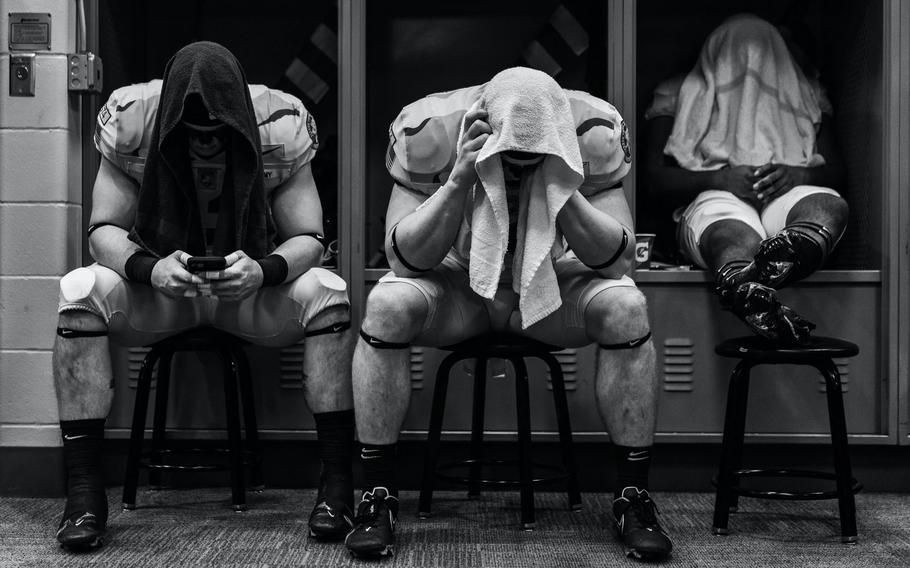 This image by Dustin Satloff of Army football players ahead of a game against Navy earned one of the top honors at this year’s World Sports Photography Awards. (Dustin Satloff )

An image of Army Black Knight football players ahead of a game against archrival Navy earned one of the top honors at this year’s World Sports Photography Awards.

The black-and-white photo by Dustin Satloff placed first in the American football category of the competition, which received more than 7,000 submissions across two dozen categories, according to organizers.

Satloff’s image shows three players from the U.S. Military Academy in the MetLife Stadium locker room with towels over their heads as they wait to take on the Midshipmen of the U.S. Naval Academy in December 2021.

One of the players is looking down at his smartphone, providing a distinctly 21st-century snapshot of the rivalry, which dates to 1890.

“Sports photography captures special moments and tells unique stories, but most of all it draws you in and reveals the unexpected,” competition co-founder Simon Burton was quoted by the BBC as saying. “It forces you to look again and reconsider.”

The New York-based Satloff said on Instagram he is “grateful to have been awarded Gold” for his image.

The overall winner of the competition, now in its third year, was David Gray’s shot of Japanese tennis star Naomi Osaka with a butterfly on her hand during a match at the 2021 Australian Open. Burton called the image “breathtaking.”