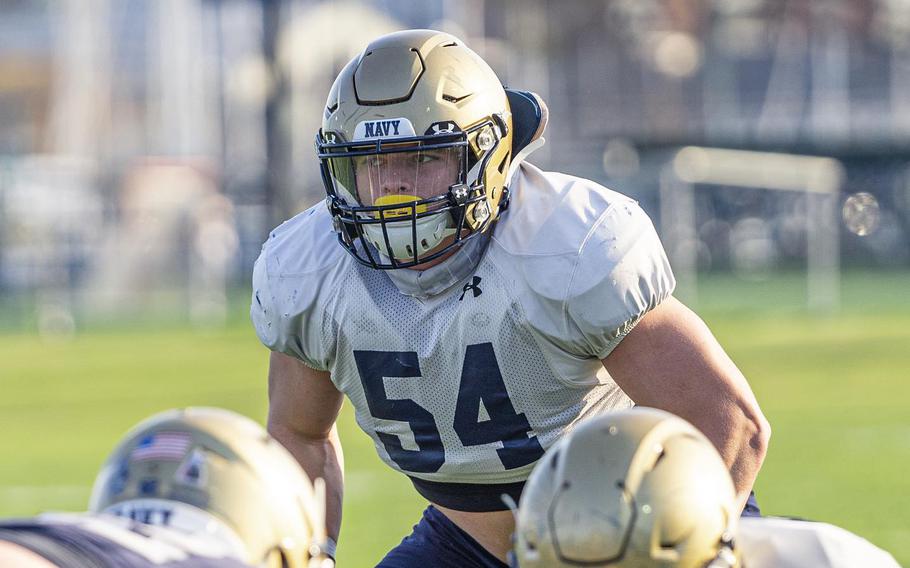 Former Navy linebacker Diego Fagot, seen in this undated Navy Football photo, is among four Naval Academy athletes who have received permission from the Department of Defense to pursue professional sports, the academy announced Sunday. Fagot was offered a contract as an undrafted free agent by the Ravens following the 2022 NFL draft last month. (Facebook)

(Tribune News Service) — Ravens linebacker Diego Fagot is among four Naval Academy athletes who have received permission from the Department of Defense to pursue professional sports, the academy announced Sunday.

Athletes approved for the policy are allowed to graduate from their respective service academies but are not commissioned as officers. Whenever their professional careers are complete, those individuals are commissioned and must serve their mandatory military requirement of at least five years.

"I know Jennifer, Diego, Michael, and Matthew will take every opportunity on and off the court or field to ably represent the Navy and Marine Corps to the American people and to assist us in our recruiting efforts," Vice Admiral Sean Buck, the Naval Academy superintendent, said in a statement.

The Capital later learned the U.S. Navy would not allow current midshipmen to sign professional contracts because it was considered outside employment. Sunday's announcement would allow Fagot to now formally sign a contract with the Ravens.

Fagot, who was offered a contract as an undrafted free agent by the Ravens following the 2022 NFL draft last month, had service selected Marine Corps Ground as a service assignment.

Ryan Williams-Jenkins of Divine Sports and Entertainment, which represents McMorris, who was invited as an undrafted free agent to attend the rookie-free agent minicamp held by the Washington Commanders, applauded the decision by the Secretary of Defense. Williams-Jenkins, a former Navy football player, believes allowing service academy athletes to pursue pro sports while the window is open is a positive for all concerned.

"As an NFL agent, Naval Academy graduate, and former Marine Officer, I think the decision is a win for these young men and women, our service academies and armed forces. These athletes have an opportunity to fulfill both of their dreams of serving in the armed forces and play pro sports," Williams-Jenkins said in a statement.

"It is becoming more difficult to recruit and get the best talent. These opportunities keep us competitive as an armed forces and allow us to continue to recruit and retain the best Naval officers. I think this decision shows that there is support for our athletic programs at the highest level."

McMorris had been set to commission as a surface warfare officer.

Navy men's soccer coach Tim O'Donohue said Nocita, who was selected seventh overall in the first round of the 2022 Major League Soccer SuperDraft by the New York Red Bulls, will sign a Major League Soccer "first team" contract this coming week and is set to join the Red Bulls on June 1. New York has already played 12 games and is almost midway through the regular season, which concludes Oct. 9.

Nocita had been bound for training as a Marine Corps ground officer.

"Now Matt has his opportunity, and I think he'll make the most of it," O'Donohue said.

Coleman, who was offered a contract as an undrafted preferred free agent by the Washington Mystics following the 2022 WNBA draft earlier this month, was released by the Mystics on the first day of training camp, so it is unclear what her professional basketball future holds. Navy women's basketball coach Tim Taylor said Coleman was still considering her options.

She had been assigned to commission as a surface warfare officer.

Navy athletic director Chet Gladchuk and football coach Ken Niumatalolo did not respond to requests seeking comment on Sunday's announcement. Fagot and McMorris also could not be reached.

Before the current policy that was put in place at the request of former President Donald Trump, the Department of Defense has continuously changed its approach as to whether Naval Academy graduates can pursue professional sports.

Former Navy baseball pitcher Mitch Harris, a 2008 graduate of the academy who was selected by the St. Louis Cardinals in the 13th round of the 2008 MLB draft, was required to serve his entire five-year commitment as a surface warfare officer. He resumed his professional baseball career after leaving active duty.

Harris beat the odds by making the major leagues as a 29-year-old rookie in April 2015, becoming the first Naval Academy graduate to reach the majors since Nemo Gaines in 1921.

Harris applied for early release from the Navy twice — in 2010 after serving two years of active duty and again in 2012 after serving four years — and had both requests denied.

In 2012, Harris was notified that he must serve out his commitment on the same day former Navy football player Eric Kettani was granted early release so he could join the New England Patriots of the NFL. Kettani was able to replace his final two years of active duty with six years in the Naval Reserves and was ordered to pay back a prorated portion of his education, which amounted to $60,000.

The Department of Defense implemented what was known as the "Alternative Service Option," which allowed service academy graduates to be released from active duty after two years to pursue activities that provide a public relations or recruiting benefit to the Army, Navy or Air Force.

For many years, Army and Air Force allowed graduates of West Point and Colorado Springs to participate in the program. However, the Navy steadfastly refused to permit Naval Academy graduates to pursue the option. Kettani was the first Naval Academy graduate granted early release to play pro sports since Hall of Fame basketball player David Robinson in 1989.

In May 2016, Secretary of Defense Ash Carter announced during his commencement address at the Naval Academy graduation that he had approved former Navy football players Keenan Reynolds and Chris Swain to try out for the NFL effective immediately.

Reynolds, a star quarterback for the Midshipmen, had been chosen in the sixth round of the 2016 NFL draft by the Ravens, while Swain signed as an undrafted free agent with the then-San Diego Chargers. Reynolds made his NFL debut with the Seattle Seahawks in September 2018.

That ruling by Carter also cleared the way for former Navy football player Joe Cardona, a 2015 fifth-round pick by the Patriots, to earn early release from his military commitment and join the Patriots on a full-time basis.

Former Navy football player Malcolm Perry became the first service academy athlete to benefit from Trump's directive. Perry was taken in the seventh round of the 2020 NFL draft by the Miami Dolphins and appeared in nine games that season, scoring a touchdown in the season finale.

Last year, former Navy football player Cameron Kinley had to fight for his opportunity to play for the Tampa Bay Buccaneers after being signed as an undrafted free agent. However, acting Secretary of the Navy Thomas W. Harker denied Kinley's request to delay his military commitment and ordered him to begin serving as an ensign.

Austin, the Secretary of Defense, then rescinded Kinley's commission, granted his request to delay commissioning and transferred the 2021 Naval Academy graduate to the Individual Ready Reserve with an enlisted status.

Kinley attended training camp with the Buccaneers but was released on Aug. 15. After failing to sign with another team, Kinley was recommissioned and began serving as a Naval intelligence officer.