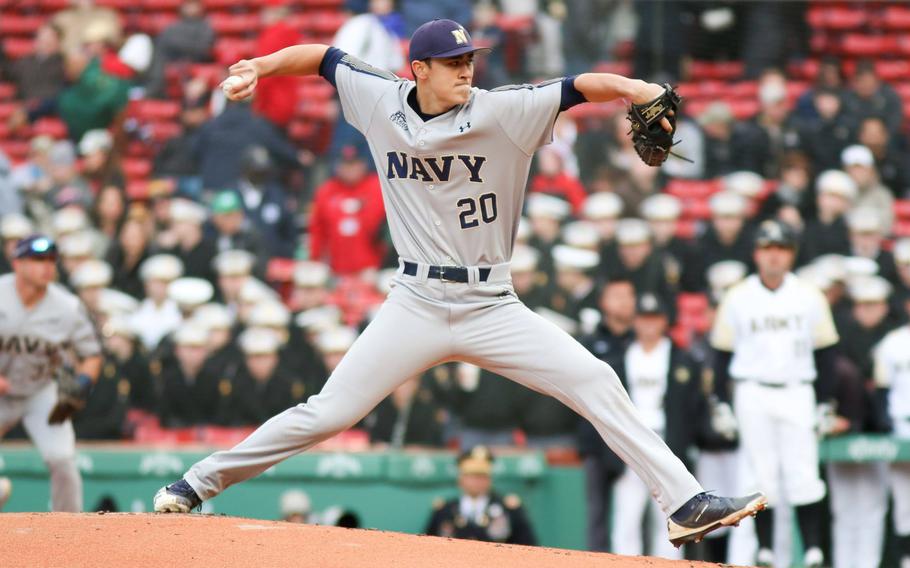 Naval Academy graduate Noah Song has completed his primary aviation training and applied for a waiver that would enable him to pursue professional baseball, his agent confirmed. (Matthew Dwyer, Navy Athletics/Facebook)

(Tribune News Service) — Naval Academy graduate Noah Song has completed his primary aviation training and applied for a waiver that would enable him to pursue professional baseball, his agent confirmed.

Song finished flight school at Naval Air Station Pensacola and received his wings of gold during a ceremony held April 28. He has petitioned the Secretary of the Navy for a waiver that would enable him to complete his service requirement in the reserves.

Sara Kelm of the sports management firm Lacertus Group, who has represented Song since he graduated from the academy in May 2019, said this was the plan all along. Song was selected by the Boston Red Sox in the fourth round of the 2019 Major League Baseball draft and signed a contract.

The Red Sox retain the rights to Song, who played briefly in the organization's minor league system before being ordered to report to flight school in June 2020.

"Noah was always going to apply for a waiver to convert his remaining service time into reserve duty," Kelm said. "There really is no news. No decision has been made and we still don't know if Noah can play or not."

Lieutenant Junior Grade Song, who took leave time after earning his wings, began a new training block at Naval Air Station Jacksonville on Monday. He was winged as a Naval flight officer, the aviator that serves as navigator, lookout and weapons operator aboard the aircraft.

Kelm declined further comment on Song's status until a decision has been made by the Secretary of the Navy. She said Song is unable to conduct interviews without the permission of his commanding officer.

Song was allowed to play for the Red Sox organization while on temporary assignment duty at the Naval Academy. The 6-foot-4, 200-pound right-handed pitcher spent two months with the Lowell Spinners, Boston's affiliate in the short season New York-Penn League.

Song was dominant at that level, posting a 1.06 ERA and allowing just two runs in seven starts. He recorded 19 strikeouts and allowed just five walks in 17 innings while being kept on a strict pitch count following a long senior season. He gave up 10 hits and held opponents to a .167 batting average.

After Lowell lost to Brooklyn in the New York-Penn League championship game in September, Song returned to the Naval Academy for a month. He was then allowed to join the United States national team for an international Olympic-qualifying tournament.

According to many scouts, Song was the best starting pitcher on the Team USA roster and performed impressively — both in training camp and during the World Baseball Confederation Premier 12 Tournament.

Song pitched five scoreless innings in five relief appearances, notching seven strikeouts as scouts clocked his fastball at 99 mph. Baseball America ranked Song as the No. 9 overall prospect in the Red Sox organization at the time.

Song initially submitted a waiver request to the Department of Defense seeking a transfer to Navy Reserve in October 2019. However, the California native changed his mind six months later and submitted an updated request to pursue flight training after all.

Kelm said Song focused completely on flight school for the past two years and did not attempt to work out at Boston's minor league facility in Fort Myers, Fla., during that time. Red Sox vice president Ben Crockett recently told The Boston Globe the talented pitcher engaged in limited baseball activities while training at Air Station Pensacola.

"Obviously, flight school is incredibly demanding. That has been his priority throughout. As someone who has always hoped to have a chance to return, I think he's continued activity," Crockett said.

"We've tried to stay in touch with him on that and try to give him some guidance on programming that could fit the best, but obviously the schedule is unpredictable. But yes, there has been some level of activity."

Kelm said there is no timetable for when Secretary of the Navy Carlos Del Toro would rule on Song's waiver request. Crockett said the Red Sox organization will remain patient with the process and is proud of Song for earning his wings.

"He's done incredible work to get where he is professionally in flight school," Crockett told The Boston Globe. "Obviously, we'd love to have him back with us if it works out. We continue to support him either way."