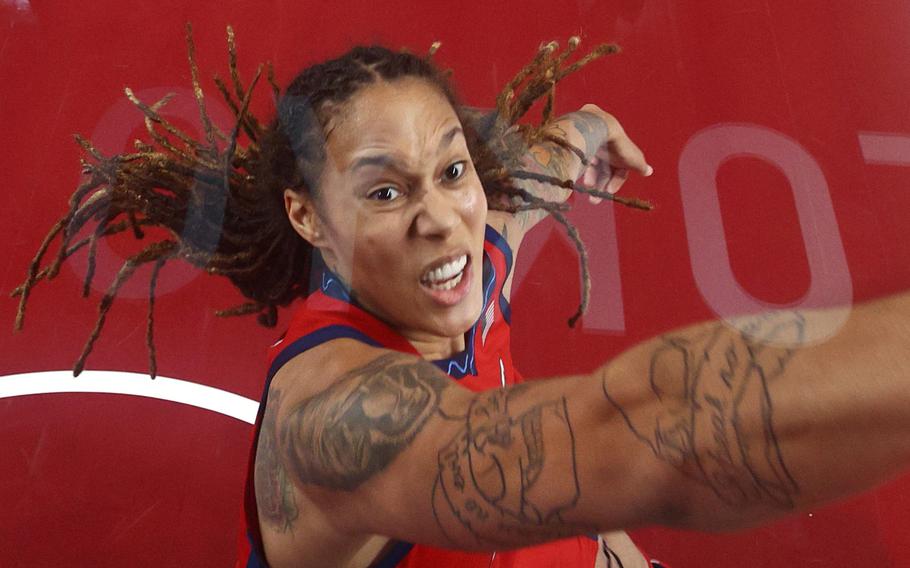 U.S. player Brittney Griner reaches for a rebound during a women’s basketball quarterfinal round game against Australia at the 2020 Summer Olympics, on July 25, 2021, in Saitama, Japan. According to reports on Saturday, March 5, 2022, Griner has been arrested in Russia on drug charges. (Gregory Shamus/Pool)

WNBA star Brittney Griner has been arrested in Russia on suspicion of illegally bringing drugs into the country after being searched at the airport and found with hash oil in her luggage, according to Russian news agency Tass.

The report states that Griner was stopped by customs control at Sheremetyevo International Airport in February upon arrival in Moscow from New York when a service dog reacted to the presence of drugs. The two-time Olympic gold medalist's luggage was searched and run through X-ray equipment and vape cartridges of liquid cannabis oil were found.

"We are aware of and are closely monitoring the situation with Brittney Griner in Russia," the Phoenix Mercury said in a statement. "We remain in constant contact with her family, her representation, the WNBA and NBA. We love and support Brittney and at this time our main concern is her safety, physical and mental health, and her safe return home."

The timing of the arrest was unclear, beyond that it happened last month. But the news of the incident coincides with Russia's invasion of Ukraine. The United States and other Western and NATO nations have enacted sanctions against Russia and have supported Ukraine with military equipment.

The U.S. Department of State has issued a Do Not Travel advisory for Russia due to the "unprovoked and unjustified attack by Russian military forces in Ukraine" and the possible "harassment against U.S. citizens by Russian government security officials." The department added that U.S. citizens should leave Russia immediately and that the Embassy has "limited ability to assist U.S. citizens."

All other WNBA players are out of Russia and Ukraine, according to a WNBA spokesperson. Several prominent WNBA stars are on the rosters of Russian teams including Breanna Stewart, Courtney Vandersloot, Jonquel Jones, Natasha Howard and Arike Ogunbowale.

"USA Basketball is aware of and closely monitoring the legal situation facing Brittney Griner in Russia," the organization said in a statement. "Brittney has always handled herself with the utmost professionalism during her long tenure with USA Basketball and her safety and wellbeing are our primary concerns."

The WNBA said in its own statement, "Brittney Griner has the WNBA's full support and our main priority is her swift and safe return to the United States."

Cannabis cartridges are devices that contain marijuana in an oil form that can be inhaled by a component that heats the oil into a gaseous state.

Griner is listed on the roster for UMMC Ekaterinburg in Russia and has played on the team for seven seasons starting in the 2014-15 WNBA offseason. She is a seven-time WNBA all-star after being the No. 1 overall pick in 2013 and is one of the world's most recognizable women's basketball players. Many WNBA players spend the offseason playing overseas to supplement WNBA salaries that are not competitive with their male counterparts. Griner is set to have a base salary of $227,900 with the Mercury for the 2022 season.

"We are aware of the situation in Russia concerning one of our members, Brittney Griner," the Women's National Basketball Players Association said in a statement. "Our utmost concern is BG's safety and well-being. On behalf of The 144, we send our love and support. We will continue to closely monitor and look forward to her return to the U.S."