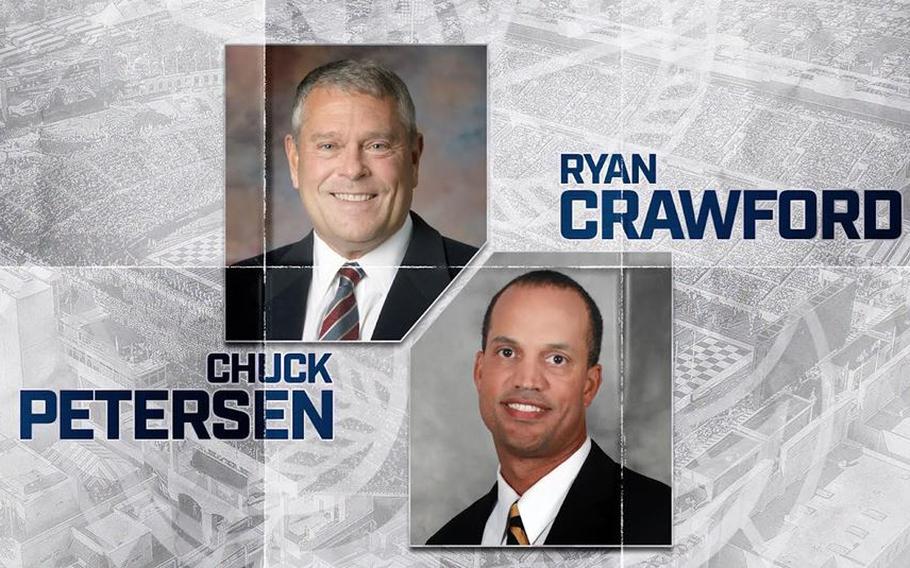 Chuck Petersen, who played an integral role in Air Force football’s glory years during the tenure of former head coach Fisher DeBerry, was hired as an offensive assistant. Ryan Crawford comes aboard as a defensive assistant. (Facebook)

Chuck Petersen, who played an integral role in Air Force football’s glory years during the tenure of former head coach Fisher DeBerry, was hired as an offensive assistant. Petersen spent a total of 17 seasons at Air Force, serving as offensive coordinator from 2000-06.

Ryan Crawford comes aboard as a defensive assistant, filling the vacancy created when Steve Johns was let go. Crawford spent the past four years coaching the secondary at Wake Forest under Dave Clawson. He was also the assistant special teams coordinator for the Demon Deacons.

Crawford will coach the safety position for the Midshipmen, replacing defensive coordinator Brian Newberry in that role. Newberry will no longer coach a position after doing so the past three seasons and will focus on the entire defensive unit.

“We are very excited to welcome Coach Chuck Petersen and Coach Ryan Crawford to the brotherhood. We feel like we have hit home runs with both of them,” Navy head coach Ken Niumatalolo said. “Most importantly, they are both men of Integrity and impeccable character. They will develop young men of character and leadership, which is the vision of Navy Football.”

Niumatalolo also announced that Jerrick Hall will now coach the entire defensive line — adding ends to the nose guards and tackles he previously tutored. Joe Coniglio, who was a defensive assistant in his first season with Navy, will now coach both outside linebacker positions — strikers and raiders.

Lastly, Va’a Niumatalolo has been shifted from offensive assistant to defensive analyst and assistant director of football operations by his father.

Petersen coached the running backs, wide receivers and quarterbacks/fullbacks for Air Force before being promoted to offensive coordinator. Air Force captured the Commander-in-Chief’s Trophy 12 times from 1990 through 2002 on the strength of a combined record of 25-3 against Army and Navy while Petersen was on staff. The Falcons also claimed three conference championships and qualified for nine bowl games during his tenure.

“Coach Petersen is one of the elite option minds in the history of college football and brings to Annapolis a wealth of knowledge, particularly when it comes to service academy football,” Niumatalolo said.

Petersen left Air Force after DeBerry retired and was replaced by former player Troy Calhoun. He spent four seasons (2007-10) as safeties coach at North Texas then moved to the high school ranks as head coach at Orange Lutheran (2012-16) in California and Hyde Park (2017-21) in Austin, Texas.

Petersen is a 1985 graduate of the Air Force Academy, where he was a four-year letterman at cornerback and served as a team captain as a senior year. He was a member of the first couple Commander-In-Chief’s Trophy teams in program history.

Petersen, who served seven years active duty in the United States Air Force and was honorably discharged as a captain, has family connections to Navy football. Brady Petersen, the youngest of his three children, is a 2019 academy graduate and played four years of football. Current Navy kicker Bijan Nichols is Petersen’s nephew.

Wake Forest compiled a 30-19 record and went to four bowl games while Crawford was on staff. He helped lead a secondary that was instrumental in the Demon Deacons becoming one of five schools in the Football Bowl Subdivision to post consecutive seasons with 13 interceptions or more.

In his first season working with the special teams in 2020, Wake returned a kickoff for a touchdown for the first time since 2003, while Donovan Greene ranked fourth nationally in kickoff return average.

Crawford spent six seasons as the secondary coach and special teams coordinator at Harvard and also made stops at Rhode Island, Bucknell and his alma mater, Davidson.

Crawford earned a bachelor’s degree in biology while playing defensive back at Davidson and was named the school’s male athlete of the year in 2000. He led the Football Championship Subdivision with eight interceptions as a junior, earning first team All-America honors. He was inducted into the Davidson Hall of Fame in 2012.

“ Coach Crawford has coached at the highest level in the ACC. He has extensive experience of recruiting quality student-athletes at Harvard and Wake Forest,” Niumatalolo said.