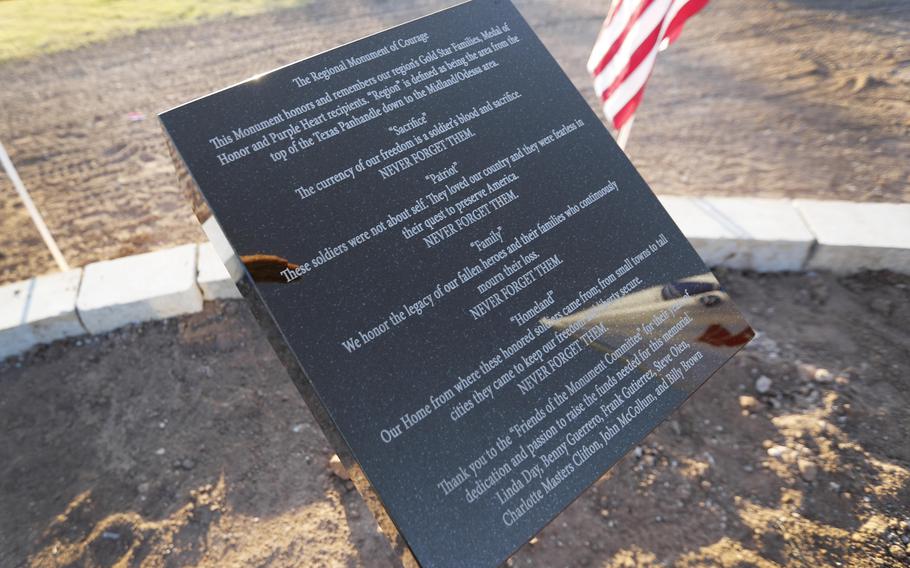 Gold Star families and members of the community held an informal gathering at the new Monument of Courage, next to the Lubbock Area Veterans War Memorial, built to honor 12 West Texas Medal of Honor recipients. The event included a toast to their service and a permanent tribute to their sacrifice, Thursday evening, June 25, 2020. The granite monument was installed earlier in the day Thursday at Henry Huneke Park at 84th and Nashville Avenue. (Mark Rogers, Lubbock Avalanche-Journal/TNS)

MEMPHIS, Tenn. (Tribune News Service) — Red Raiders will be joined by more than 250 Gold Star families, including a family from the South Plains, Tuesday evening during the Liberty Bowl in Memphis.

The Morin family from Brownfield, Texas, will be going to the Liberty Bowl to join Gold Star families along with WWII Medal of Honor Recipient Woody Williams to watch Texas Tech take on Mississippi State in the highly anticipated football matchup.

The family of the late Sgt. Steve Morin received four tickets to the bowl game from Texas Tech Athletics, while American Airlines sponsored their round-trip air tickets and the hotel rooms were provided by a donor.

Steve Morin was 34 when he was killed Sept. 28, 2005, in Iraq by an improvised explosive device, according to Avalanche-Journal archives.

His family said he had natural leadership skills and an instinct to keep others from harm. His family was not surprised when he joined the military after high school; first came the Navy, then the Army National Guard.

The families will be a part of pregame tailgate festivities, where they can get together and have some food and visit with each other, said Graham.

Graham said they will also have a traveling Gold Star families Memorial Monument that will be on display, and they will be honored during the game. All of the families will be seated in one section together, he said.

"Historically, something like this has never been done before on that level in terms of that amount of families," Graham said. "It's really important for everybody that's going to be watching the game to really take a moment to pause and think about those Gold Star families, about their loved ones that pay that ultimate sacrifice — that's why we have the freedoms and liberties."

Graham said they are very glad to have an opportunity to honor the Gold Star families on a national level through a game set to air at 5:45 p.m. on ESPN.

By Monday afternoon, he said the family had arrived in Memphis and were excited to go to the game.