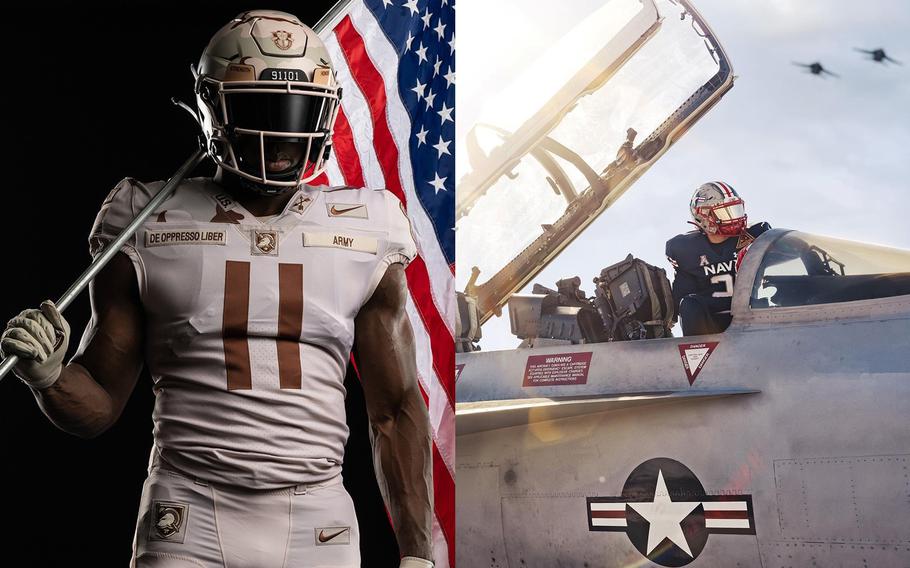 Images from the Army and Navy football Facebook pages ahead of the Dec. 11, 2021, Army-Navy game at MetLife Stadium in East Rutherford, N.J. (Facebook)

New York City was the epicenter of the horrific terrorist attacks that took place Sept. 11, 2001.

Television footage showing jet airliners tearing through the Twin Towers of the World Trade Center was how most Americans learned their country was under attack.

In the days, weeks and months afterward, citizens of the United States learned more and more about what exactly happened at what became known as “Ground Zero” in the heart of Manhattan.

A total of 2,753 people in New York City died as a result of the 9/11 terrorist attacks. Most were workers in the Twin Towers along with New York City police and fire department personnel that responded to the site.

In 2016, the United States Naval Academy and Military Academy sent out a request for proposals from cities along the Eastern seaboard and beyond to host the Army-Navy football game.

When all was said and done, Navy athletic director Chet Gladchuk and Army counterpart Eugene “Boo” Corrigan agreed there was only one location that truly made sense to hold the 2021 edition of “America’s Game.”

That is why MetLife Stadium in East Rutherford, N.J., just across the Hudson River from Manhattan, will host Army-Navy football in the year in which America recognizes the 20th anniversary of the 9/11 terrorist attacks.

“There is a tenet of the RFP that gives Army and Navy the flexibility to make special exceptions for something that is extraordinary,” Gladchuk said this week. “Coming to the greater New York City area on the 20th anniversary qualifies as extraordinary.”

Gladchuk was speaking from the club level of MetLife Stadium on Wednesday as part of the annual Army-Navy news conference. That NFL facility, which opened in 2010, serves as home for both the New York Giants and New York Jets.

Gladchuk said government officials at both the state and city level along with the management of MetLife Stadium and ownership of the Giants and Jets embraced the idea of hosting the Army-Navy game on the 20th anniversary of 9/11. USAA, the financial services company that is presenting sponsor of the Army-Navy game, was fully onboard as well.

“When we put all the partners together, it turned into this wonderful vision of having the Army-Navy game here in the shadow of New York City,” Gladchuk said. “It provides the ability to do special events downtown that are associated with the game and remember the tragic events of 20 years ago in a respectful way.”

It all starts Friday afternoon in downtown Manhattan when midshipmen and cadets gather at Ground Zero for a solemn remembrance of what happened at the World Trade Center on that day. The Army-Navy “Patriot Games,” a series of contests such as tug-of-war and relay races between Cadets and Midshipmen, will be held throughout New York City.

The annual Army-Navy gala celebration will be held at the National Immigration Museum at Ellis Island. Of course, the game itself provides the best opportunity to put the spotlight on the 20th anniversary of 9/11 when a sellout crowd of 80,000 packs into MetLife Stadium and millions more watch the nationally televised broadcast on CBS.

Gladchuk said the game day program will be “present patriotism personified” with a recognition of how 9/11 impacted New York City and the surrounding region. USAA has produced the Army-Navy “challenge coin” for the pregame toss at midfield. Melted steel from the World Trade Center is integrated into each coin, one of which will be given to all 1,000 guests at the Friday night gala.

Chevrolet has put together a presentation that will take place at the stadium during the game and as part of the television broadcast. It tells the story of New York City firefighter Craig Monahan, who responded to the World Trade Center after the 9/11 attacks.

After spending hours and hours working in rescue operations, Monahan returned to find his 1992 Chevy Silverado completely covered in debris from the fallen towers. That vehicle was made famous for starting up despite suffering significant damage.

A halftime presentation will feature Lee Greenwood singing “God Bless the USA,” the song that became a rallying cry in the wake of the 2001 terrorist attacks. Greenwood previously performed the pop hit with the signature line “I’m proud to be an American” at the 2001 Army-Navy game in Philadelphia.

“I think it’s great this game can be a centerpiece for our nation to remember those we lost on 9/11 and honor those that answered the call and went on to take the fight to the enemy,” Army West Point coach Jeff Monken said Wednesday. “That’s what these two academies are all about — developing military leaders who respond whenever freedoms are being attacked anywhere in the world.”

This will be the 24th Army-Navy game for Navy coach Ken Niumatalolo, who has developed tremendous respect for what the event symbolizes. Now in his 14th year as head coach, Niumatalolo has seen several former Navy football players that died while on active duty.

J.P. Blecksmith, who played wide receiver for Navy in that 2001 matchup against Army, was killed by a sniper while leading his India Company in clearing insurgents from Fallujah, Iraq.

“It is only fitting for these two institutions to come together to remember that horrific day in our nation’s history and pay tribute to all the people that lost their lives on 9/11, those men and women working inside the towers and the first responders.”

William Squires is a 1975 Naval Academy graduate and served 12 years on active duty as a naval aviator. After 12 additional years in the reserves, he retired as a commander and got into the sports facilities and event management industry.

Squires managed old Giants Stadium on two occasions and currently heads his own consulting firm that counts the Giants as a client. He serves as operations liaison between the team and MetLife Stadium management.

Sept. 11, 2001, was a gorgeous sunny Tuesday around the New York metropolitan area and Squires was overseeing the filming of a Wendy’s commercial on the field at Giants Stadium that morning. Squires was talking to the producer when an assistant informed them an airplane had just crashed into the north tower of the World Trade Center.

“I rushed out to my car and drove to a spot on the stadium grounds that provided a clear view to Manhattan. I couldn’t believe how much smoke pouring out of the tower,” Squires recalled.

While Squires was watching, the second plane sliced through the south tower and the former Naval officer was stunned into a cold realization.

“I went back to my office inside the stadium, sat down at my desk and cried because I realized we were at war,” he said.

Squires is among those who have advocated fiercely for the Army-Navy game to return to MetLife Stadium for the first time since 2002. He believes “America’s Game” should be played at the facility every five years in recognition of 9/11.

“It’s a great opportunity for the greater New York City region to recognize all those innocent people who lost their lives that day, as well as the Army, Navy and Marine Corps service members that went to war as a result,” Squires said. “I honestly could not think of a better place to hold this great event.”

Visit The Capital at www.hometownannapolis.com