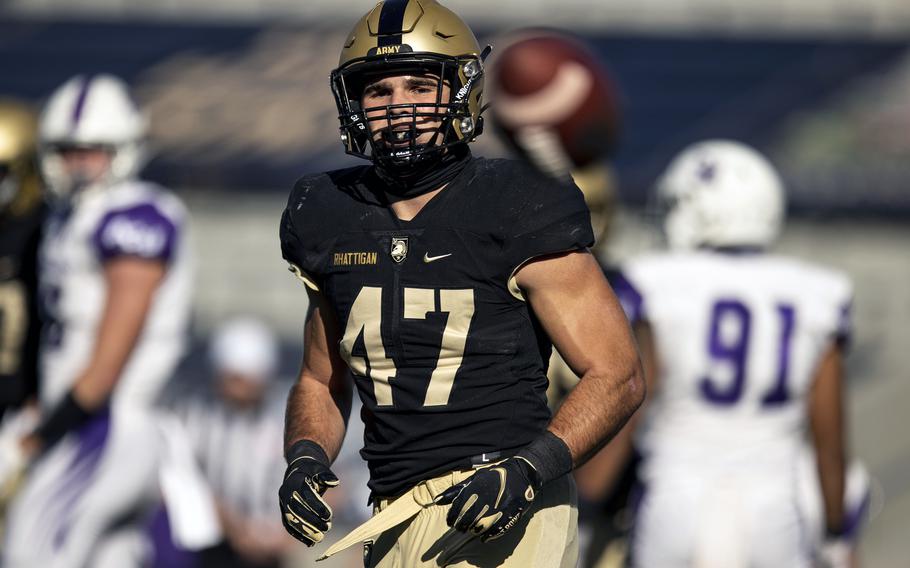 Army senior linebacker Jon Rhattigan (47) is shown during the second half of an NCAA college football game against Abilene Christian in West Point, N.Y., Oct. 3, 2020. Rhattigan carved out a special-teams role for the Seattle Seahawks in the NFL. (Dustin Satloff/Army athletics)

SANTA CLARA, Calif. (Tribune News Service) —  His West Point classmates are changing out of their officer-basic courses and going into their first assignments in the U.S. Army.

Two weeks after he led his teammates onto Lumen Field for a game carrying the franchise’s symbolic 12 flag for fans, the undrafted rookie from Army made the pivotal play in the second half of Seattle’s rally past the NFC West-rival San Francisco 49ers 28-21 Sunday at Levi’s Stadium.

After Russell Wilson’s 16-yard touchdown run had given the Seahawks (2-2) their first lead in the third quarter at 14-7, the first West Point graduate to play for the Seahawks sprinted down the field on Jason Myers’ kickoff. Around the 10-yard line Rhattigan saw 49ers returner Trenton Cannon fall down, drop the ball then get back up trying to resume his return.

Seahawks teammate DeeJay Dallas forced Cannon to fumble again with a hit. Rhattigan was there at the 14-yard line to recover the fumble.

Two plays later, Wilson made his vintage, spinning, escaping touchdown pass to Freddie Swain. Seattle led 21-7, and stayed in control the rest of the game for its first division win of the season.

“I was doing what I had to do, reading my blocks first,” Rhattigan said outside the visiting locker room in Santa Clara Sunday afternoon. “Out of my periphery I saw that he had muffed it, had got it again. I saw someone come in and kind of hit him again. And when he was coming down I saw the ball fly out of his hands.

“Me being a football player, around the football, you’ve just got to jump on that.

“Those are the plays you love to have.”

When he got to the sideline, Rhattigan got more hugs and handshakes than a plebe at the end of getting through his freshman year at West Point.

“It was a great feeling,” Rhattigan said, “and, really, just because that’s a big play. That’s something we preach every week on special teams: make a big play, setting up the offense to score. And that’s exactly what we did.”

Rhattigan has been playing special teams primarily in four of his last five football seasons, after doing it three of his four years for Army. He’s carved out a special-teams role for the Seahawks while as a backup middle linebacker to Bobby Wagner, the All-Pro captain who never comes out of games.

Ben Burr-Kirven had Rhattigan’s current role the previous two seasons for Seattle. The former Washington Husky tore the anterior cruciate ligament in his knee during a preseason game in August. He’s on injured reserve and out for the season following surgery.

Still, a nagging injury all summer meant Rhattigan didn’t make the Seahawks out of the preseason’s final cuts Aug. 31. The team put him on waivers with the purpose of re-signing him to its 16-man practice squad. Rhattigan cleared waivers, and Seattle re-signed him to the practice squad.

That kept him on deferment of his service obligation to the U.S. Army.

Rhattigan wants to serve his country. Every cadet does. No one goes to a service academy seeking to avoid serving our nation on active military duty. There are colleges for that. Cadets at West Point and the Air Force Academy and midshipmen at the Naval Academy are honored to volunteer to defend the Constitution, as Rhattigan did by taking that oath in 2017 fresh out of Neuqua Valley High School in Illinois.

He missed most of August with a hamstring injury that threatened to end his pro football career before it really started, Rhattigan needed to show coach Pete Carroll and the Seahawks something in the final preseason game.

He shined in his Seahawks debut. He had five tackles, a tackle for loss, a pass defensed, and more noticeable play on special teams, in Seattle’s 27-0 victory over the Los Angeles Chargers in the preseason finale.

“I was fired up about Jon,” Carroll said after that game.

Most of his teammates had no idea what was truly at stake for Rhattigan at the end of the preseason.

“For the most part, no,” Rhattigan said. “Some might have family members here and there, but certainly it’s a football focus out here.

“I certainly talk about it a good bit. A lot of people are interested. It is an interesting path for me to have gotten here, so I like to share some of my experiences.

“It can be applicable, both in football and just leadership, life on and off the field. It’s good for me to be good at telling what I went through, and how the Army and military life can apply to football.

“Certainly, people are curious about it.”

Rhattigan said some of his Seahawks teammates have been “shocked” to learn he got up at 6 a.m. every day for four years, shined his shoes and his brass for uniform and room inspections, attended mandatory classes for physics, calculus, chemistry and engineering, went to summer Army training instead of the beach — while all other college football players prepared for the NFL by ... well, being in college.

“At the same time, they expect it to be different. You know, you live a structured life, you live an organized life,” he said.

“They are more just interested to hear what it was really like because they could only have an imagination about it.”

Technically, right now the Army considers Rhattigan to be in the Inactive Ready Reserve for three years. He’s not yet officially a second lieutenant, as all his classmates are.

“After my playing career, whenever that may be, I will still require five years of active duty, or service in some capacity,” he said.

This week, instead of a crash course on learning a new unit as an infantry platoon leader, Rhattigan is on a crash course preparing for the Seahawks’ quick-turnaround game against the rival Los Angeles Rams (3-1) Thursday night at Lumen Field.

“You’ve always got to be prepared,” Rhattigan said on his way to the team bus out of the Bay Area Sunday. “Special teams are a huge part of the game — as we saw (against San Francisco).

A Seahawks equipment man made sure to keep the ball to give to Rhattigan for his first professional fumble recovery.

It is absolutely a keepsake for a 22-year-old who was a backup at Army his first three seasons for taking full advantage of the only year of starting in college last fall — taking it all the way to Seattle and the NFL.

“The equipment staff’s got it on lock for me,” he said, smiling.

He says the ball is going to the home of his parents, Debbie and Thomas, in Marco Island, Florida, on the Gulf Coast. They’ve moved there from Rhattigan’s native Naperville, Illinois, just outside Chicago.

“Yeah,” he said. “They are sick of the Illinois winters.”