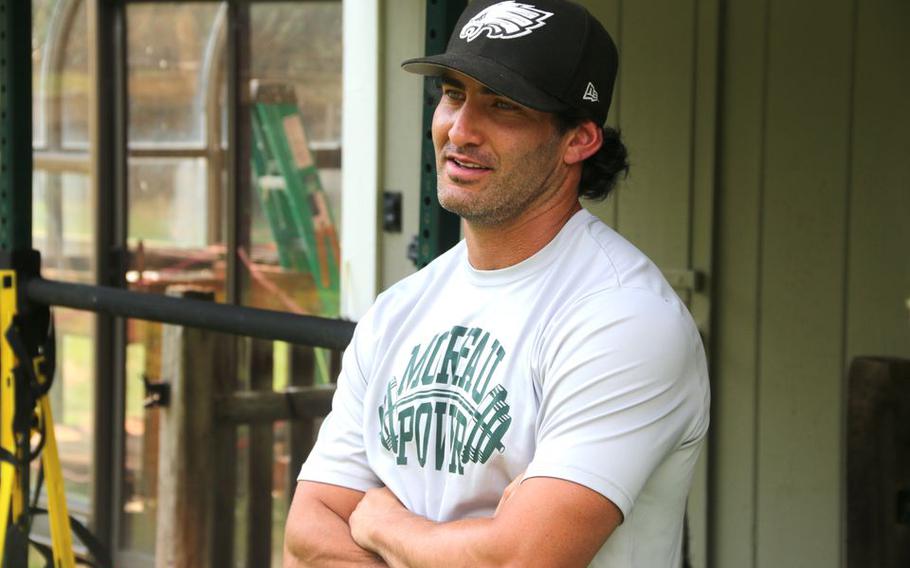 (Tribune News Service) — Whenever Eagles quarterback Jalen Hurts takes off for a 20-yard run, or right tackle Lane Johnson pancakes a Pro Bowl pass rusher, those highlight plays are the result of countless hours of preparation. A good amount of that time isn’t spent in the film rooms or on the practice field at the NovaCare Complex.

Johnson built a free-standing gym, affectionately known as “The Bro Barn,” outside of his home in South Jersey, where the lineman, the quarterback and other teammates work out.

The Barn is a mostly wooden, 1,110 square-foot structure, filled with weight machines, a bench area and a room for stretching. A huge, colorful mural of some of its most notable regulars — including Johnson, Hurts and center Jason Kelce — lines the wall near the door. It doesn’t have a bathroom, but the building is a stone’s throw away from Johnson’s house, and features an outdoor area for drills that require extra room to roam.

While The Barn has become an attraction of sorts over the past two years, the trainer who runs it, Gabe Rangel — a Marine Corps combat veteran who has worked with MMA athletes, pop stars and a long list of NFL Pro Bowl talent — is the real X-factor for the year-round preparation of a handful of notable Eagles players.

Rangel, 34, is built like the clients he trains. A former high school athlete with military discipline to boot, Rangel is the type of trainer who can participate in nearly every drill he asks his NFL clients to perform. He runs routes for Hurts, and walks through lifting and stretching programs for the linemen. His clients respect him because he belongs in their world.

While he sounds like the “man behind the curtain” from “The Wizard of Oz,” he’s actually more like Billy Blanks meets Turtle from “Entourage.” Rangel isn’t just Johnson’s personal trainer, he’s also his de facto assistant. He keeps Johnson’s body in shape, while also keeping his mind at ease.

“He’s my right-hand man,” Johnson told NJ Advance Media. “I’ve seen no difference than a teammate on my football team. What appealed to me most is his military background and the stuff that he’s been through. His loyalty to his profession. He’s never been late. He’s always on time, and just a man of his word.”

Rangel’s word holds a lot of weight with Johnson, a freak athlete who frequently outperforms everyone in The Barn, no matter the workout. Johnson is running even with Hurts on the field in sprints and out-benching fellow linemen like Isaac Seumalo, Nate Herbig and Sua Opeta, who have become regulars in the wooden workout shed.

But sometimes Johnson needs to be saved from himself in the weight room. Johnson is constantly pushing himself, so Rangel occasionally needs to pull him back. Those restrictions can lead to screaming matches, but Johnson respects Rangel enough to listen.

“In the military, we had hard conversations that always ended at yielding the best results,” Rangel said. “When you have those hard conversations, I think the person respects you more. If I’m going to be pushed or coached, you better give me the reason why I’m being pushed or coached, and for him, when you push it too much, you need more recovery.”

Johnson and Rangel met in 2014, but the trainer didn’t really know Johnson that well when he uprooted his young family from Los Angeles to South Jersey in 2019. The gamble has paid off because of the pair’s mutual respect. While Johnson calls Rangel a teammate, his initial pitch to the trainer was much more glamourous.

“I said, ‘Hey, man, Rocky needed a Mickey,’” Johnson said. “I told him I needed him. It wasn’t too long before he moved on out.” 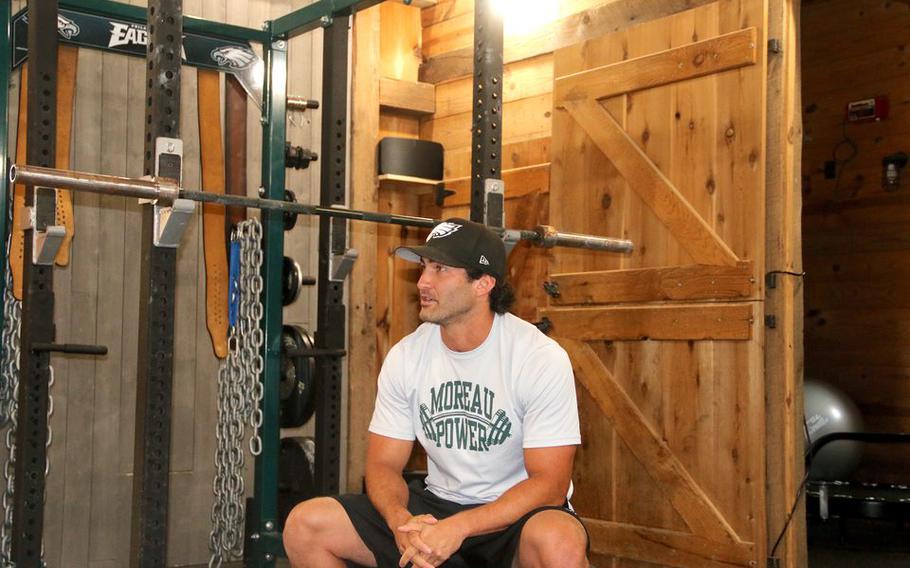 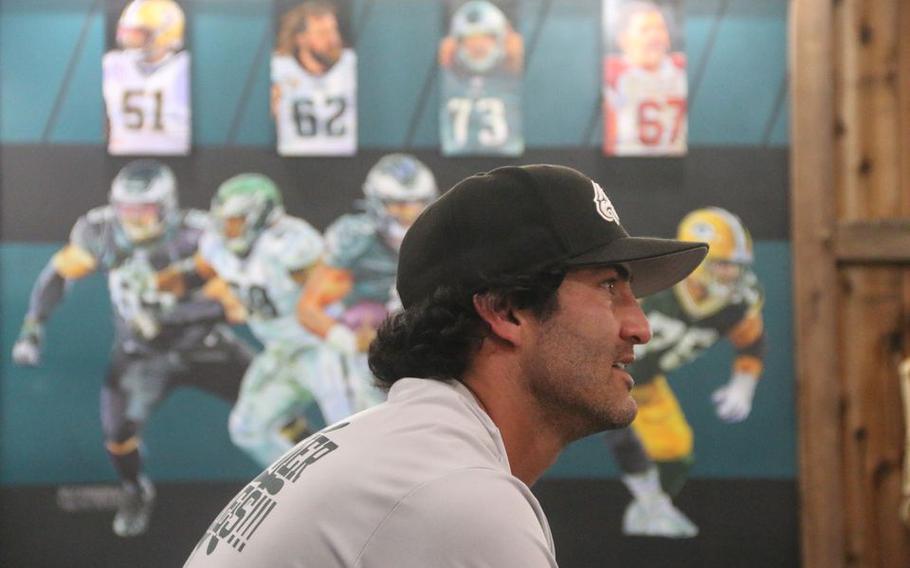 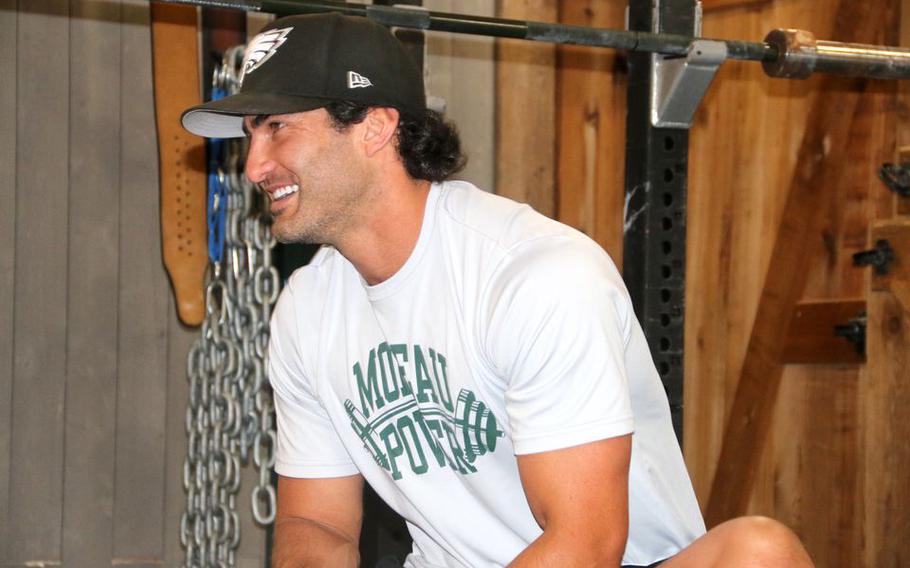 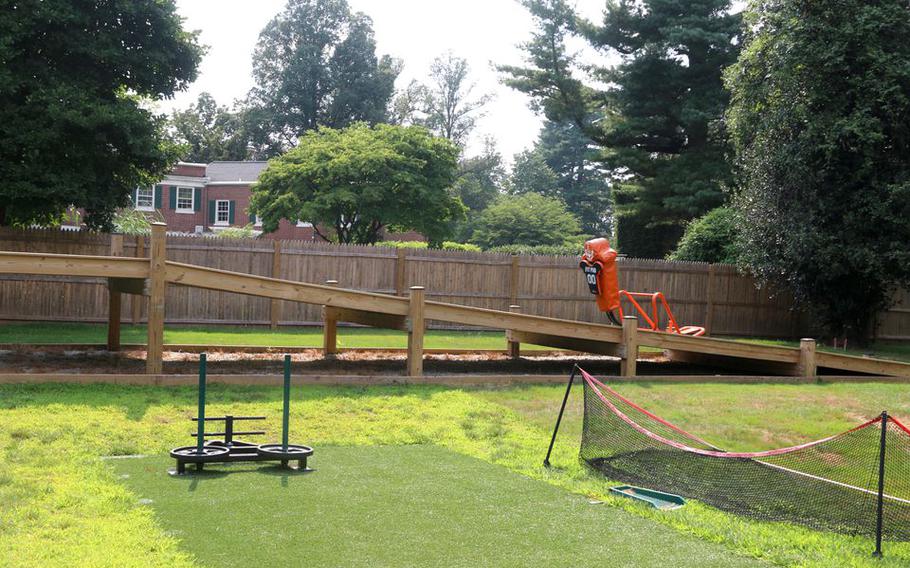 Workout stations are placed on the field around "The Bro Barn" (Chris Franklin, nj.com/TNS)

‘Brilliant at the basics’

When someone visits The Barn, they’re likely to hear Rangel’s favorite motto: “Brilliant at the basics.”

During his time with the Marine Corps, Rangel had a commanding officer in the Air Naval Gunfire Liaison Company who used the adage routinely during training. Rangel has adopted the phrase, and he has used it in his workouts with everyone from Diddy to Marshawn Lynch.

Rangel was 17 when he joined the Marines. By 18, he was stationed in Iraq as a radio operator and forward observer with a jump certification.

His time in the military molded his discipline and ignited his desire to train others in civilian life.

“I think the transition was easy,” Rangel said. “I was in an elite unit, so we went to jump school, we went to prisoner of war school. You do a lot of these schools, [like] martial arts school; I was a black belt instructor for that.”

The Hayward, Calif., native was inspired to get into strength and conditioning training by a pair of mentors, Jesse Burdick and Harry Selkow, who worked for a company called EliteFTS.

When they first met, Selkow, a fellow Marine, noticed Rangel preparing for Iraq with CrossFit training. Selkow saw Rangel’s “jump wings” tattoo on his back and approached him about his workout. Selkow, a powerlifter, told Rangel to drop the typical Marine routine and come work out with him.

“I just kind of fell in love with it,” Rangel said.

After the military, Rangel finished his bachelor’s degree at California State-Fullerton, then moved to an internship at the University of Tulsa, where he worked with Press Taylor, who eventually became the Eagles’ offensive coordinator. When he jumped to a gym in Los Angeles, Rangel trained NFL stars like LeSean McCoy, Cam Jordan and Mychal Kendricks.

That’s where he connected with FOX Sports reporter Jay Glazer, who hired Rangel, then just 25, to be the head coach of a new MMA gym — Unbreakable — Glazer was opening. Rangel built up their clients’ physiques, while Glazer and his MMA trainers prepared them for combat.

The MMA training quickly attracted NFL players, including linemen, who are drawn to MMA because of the similarities of the battles in the trenches and the violence in the cage.

Before and after the 2013 NFL Draft, Rangel trained Kyle Long, the Chicago Bears’ eventual first-round pick. The two lived together during Long’s rookie season. When Chip Kelly saw the results in Long, an Oregon alum, Kelly, then the Eagles coach, sent Johnson and tight end Zach Ertz to work out with Rangel in 2014.

Rangel earns the trust of his clients through his dedication to his job. Given the stakes – and money – that go into offseason training, Rangel must be diligent, and maybe more importantly, likable within an intense environment.

“We’re putting you through a lot of hard [crap],” Glazer said. “The guy you’re training with, you really got to love being around him.” 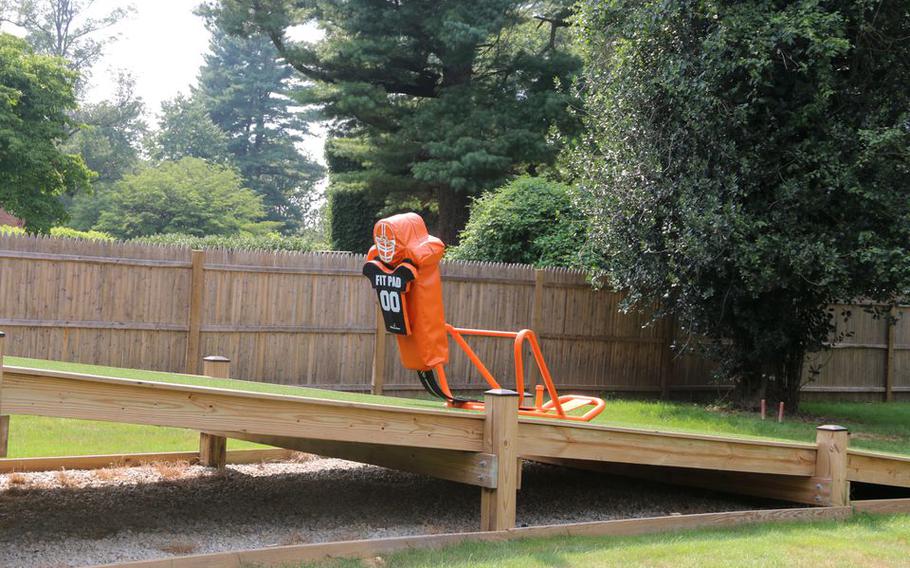 A blocking sled sits on a ramp behind "The Bro Barn" (Chris Franklin, nj.com/TNS) 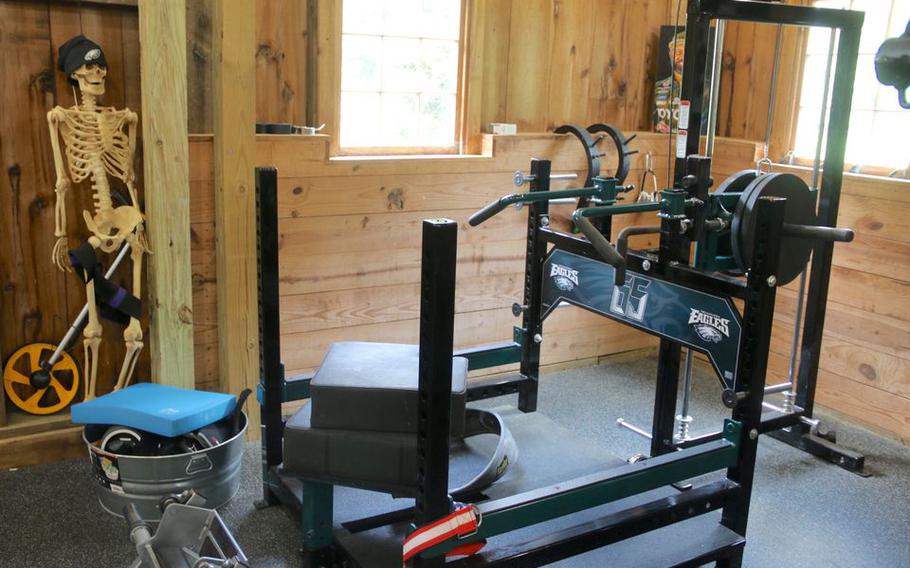 Eagles right tackle Lane Johnson's number 65 is seen on some of the equipment inside "The Bro Barn" (Chris Franklin, nj.com/TNS) 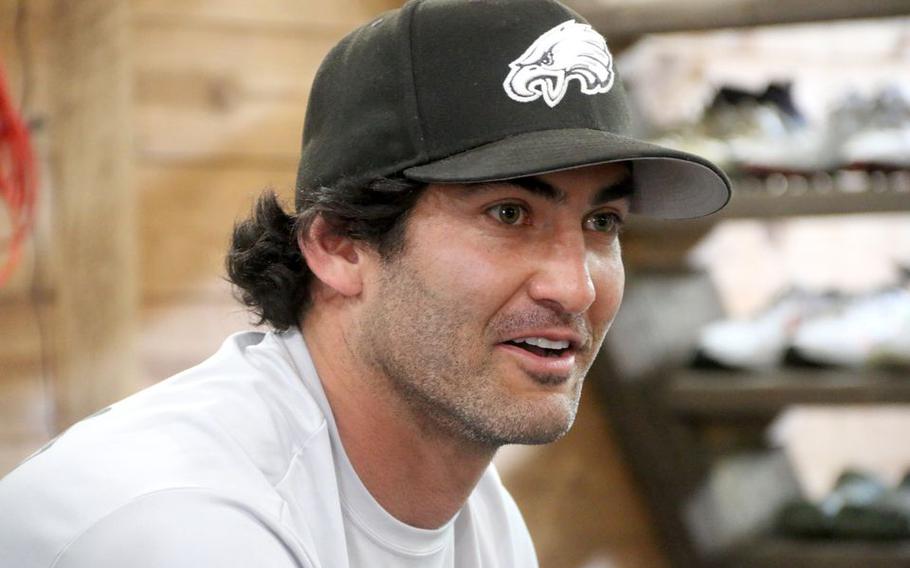 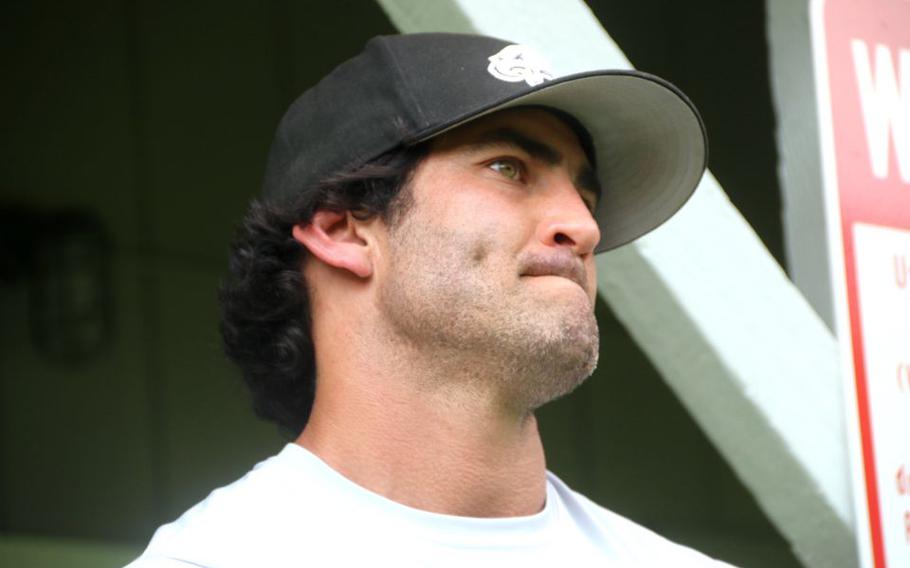 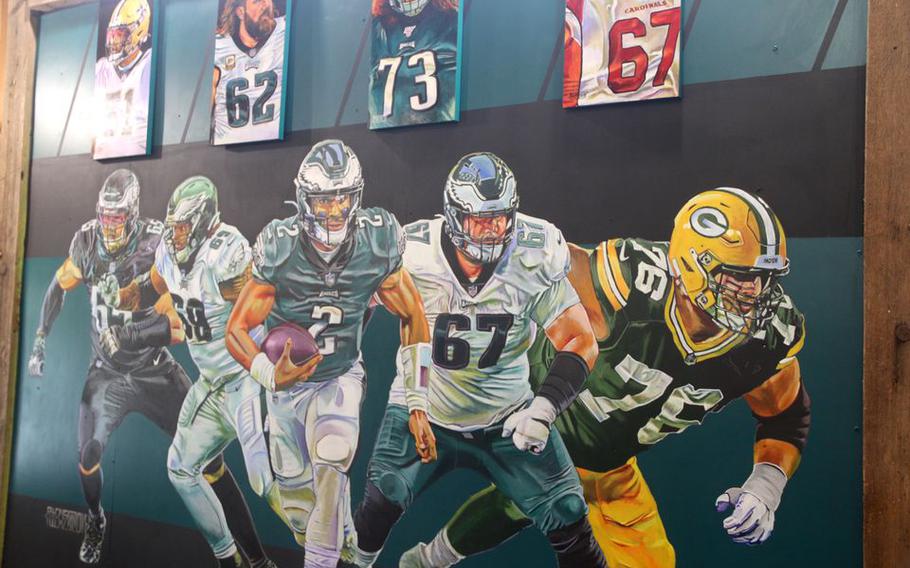 A mural inside "The Bro Barn" depicts some of the players who have worked out at the facility. (Chris Franklin, nj.com/TNS)

From ‘Payphone’ to paydirt

Rangel eventually left Unbreakable to train celebrities who wanted to work out like pro athletes. He connected with Maroon 5 frontman Adam Levine. When he wasn’t belting out hits like “This Love” and “Payphone,” Levine was lifting weights with Rangel, who focused on getting Levine cut for his shirtless serenades. It was different than working with pro athletes, but Rangel enjoyed the challenge.

Rangel was at Mercedes-Benz Stadium in Atlanta for Super Bowl LIII, as Maroon 5 jammed during the halftime show. Shortly after the New England Patriots defeated the Los Angeles Rams, 13-3, for the sixth and final Lombardi Trophy of Bill Belichick and Tom Brady’s historic partnership, Rangel received a call from someone who had beaten the Patriots the year before: Johnson called Rangel to wrangle him away from Levine.

“It was after the 2018 season, when I had an [ankle] injury,” Johnson said. “I just felt that my body was just falling apart.”

Johnson wanted a full-time trainer to work with him exclusively in South Jersey, and Rangel was the guy. Johnson had kept in touch with Rangel as he trained athletes in nearly every professional sport and then made the transition to the Hollywood crowd. Johnson liked that versatility.

“That appealed to me, but really just his personality and his military background,” Johnson said. “I think that appealed most to me besides the training hours that he had.”

Rangel had to sell his wife, Kara, who had recently given birth to their son, on the move. Relocating to the opposite coast is difficult enough, but heading east with a young family — including an infant — is a whole different challenge.

“I was just, like, “We could do this,’ and she’s like, ‘We’re going to move to Philadelphia from Los Angeles?’” Rangel recalled with a laugh.

There’s a whiteboard in Johnson’s garage that has a schedule that Rangel updates daily. Rangel tries to take advantage of every free second in the day to make Johnson and his teammates better.

“I don’t know if the guy ever sleeps, to be honest with you,” Johnson said. “Whatever time you text him, he’s gonna text back. He’s always there every day.”

Rangel’s work with Johnson has attracted his Eagles teammates to The Barn. Johnson is among the best athletes and lifters on the team, so his endorsement goes a long way with other players, especially younger teammates. Johnson’s recommendation lured Hurts and a handful of linemen to The Barn for several hours each week in the offseason.

“Lane is a freak athlete. He’s strong, big, and fast. Building that chemistry and having a great relationship with him has been good,” Hurts said. “We had other teammates over there as well. We’ve been putting in a lot of work.”

Rangel has been impressed by Hurts’ drive and efficiency. During cardio workouts, he watches film of Michael Vick and studies the playbook between lifts.

“It’s motivating because [teammates] see how hard he works, and I think a lot of people think the quarterbacks are these fragile people,” Rangel said. “And when Jalen’s in here pulling 600 pounds, when he’s squatting 500 pounds ... the linemen are put on notice. … I think from a camaraderie standpoint ... every team wishes they could have that.”

Herbig, a third-year lineman who weighed 334 pounds, was directed by the Eagles to lose weight. With Rangel’s help, he went through a radical transformation.

“He pushed me hard,” Herbig said. “I wanted to do it for myself and for the team to put myself in a better position. I just wanted to be quicker and in better shape, being lighter and leaner. I lost 20 to 30 pounds. I feel a lot quicker, a lot faster, and in better shape.”

“I think Stout, in meetings, is always joking like, ‘You better get in that Barn with Lane,’” Rangel said. “So, we have the credibility. I think they’ve seen the work that we’ve done. We have ghosts here.”

At the core of everything is Rangel’s relationship with Johnson. They have been working closely together for more than two years, and their relationship has turned into a special bond, in and out of The Barn.

“We are close friends, and it hasn’t gotten in the way,” Rangel said. “If you’ve ever watched a workout, he’s significantly better than the next person, and I don’t care who that next person is. … It’s easy to work with someone like that because they’re going to always keep pushing the envelope.”