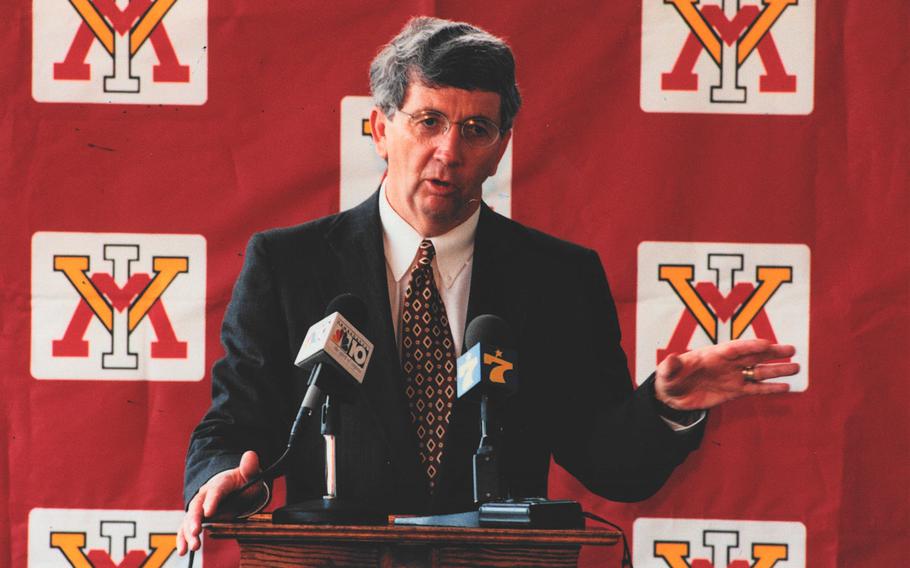 LEXINGTON, Va. (Tribune News Service) — The road to Donny White’s memorable career as player, coach and athletic director at Virginia Military Institute, and a distinguished tour of duty in Vietnam, began on the youth and high school playing fields of the Peninsula.

Little League and high school teammates of White, who died last week of cancer at 78, invariably remembered him as small, fast and smart. White started at shortstop for the Hampton-Wythe All-Stars who reached the 1954 Little League World Series in Williamsport, Pa. — the only Peninsula baseball team ever to accomplish the feat.

“Donny and I were the only 11-year-olds on that team,” Royce Bowden said, recalling that White was one of the three fastest boys during a field day held for the eight teams before the tournament. “He took baseball very seriously and was very good at a very young age.

“He was small and quick with very good range. He was also a good guy and a great friend.”

Hampton-Wythe lost 4-2 in the single-elimination Series to the team from California led by 1962 National League Rookie of the Year Ken Hubbs of the Chicago Cubs. Boog Powell, a two-time World Series winner for the Baltimore Orioles, played for the Florida team.

White told the Daily Press years later that it was such a unique experience, none of his teammates realized how big it was, but recalled Williamsport was “like a major league field on a Little League scale.” He returned there with seven of his Hampton-Wythe teammates in 2010 and threw out the first pitch before the U.S. championship game.

Because his father, Peter, graduated from Newport News High, White paid tuition and commuted from Hampton to play football, basketball and baseball for the Typhoon. He impressed in all three, but particularly in football and baseball.

“He had good speed and could play any sport,” said Jimmy Hall, who started in the backfield with White on the 1959 Newport News football team that went 9-1. “Whatever his weaknesses were, he overcame them by being smart.

“He took real good ability and made great ability out of it because of his smartness and dedication.”

Hall, whose 42-year football coaching career included stints as assistant to Eddie Robinson at Grambling and Johnny Majors at Tennessee, said White’s versatility made him an asset on the football field.

“By the time we were juniors (in 1959), Hampton had been beating us a long time,” Hall said. “Everyone thought they were favored, but Donny starred, returned a punt for a touchdown and we won (34-20).”

Horace Underwood, the starting quarterback for the Typhoon in that game, said, “Donny led by example. He was vocal to an extent, but he was more about showing you how to play the game.”

Which is what White did most of his life following a playing career at VMI in which he was co-captain of the 1964 football team and a three-time All-Southern Conference shortstop in baseball. Following graduation in 1965, he was commissioned as a field artillery officer and earned the Bronze Star, Purple Heart and Air Medal with four oak leaf clusters during his tour in Vietnam.

White was named athletic director at VMI in 1998 and held the job 15 years before retiring. He was instrumental in the growth of women’s sports at the school, which received the Big South Sportsmanship Award an unprecedented six consecutive years during his tenure.

“Coach White brought a passion for many sports, a level of leadership and good sportsmanship, and drive to compete that hundreds of athletes, like myself as a cadet, will never forget,” VMI Superintendent Maj. Gen. Cedric T. Wins said in a school release. “His lessons in the classroom and on the playing field will be passed on for generations.”

Bowden said, “I’m not surprised he made a real success of his life and I’m really proud of him. He was a people person with a great personality and dedicated to anything he put his mind to.

White is survived by his wife, Bettie, three children and 10 grandchildren. His funeral will be held Wednesday at 2 p.m. at St. Stephen’s Episcopal Church, 6000 Grove Ave., in Richmond.