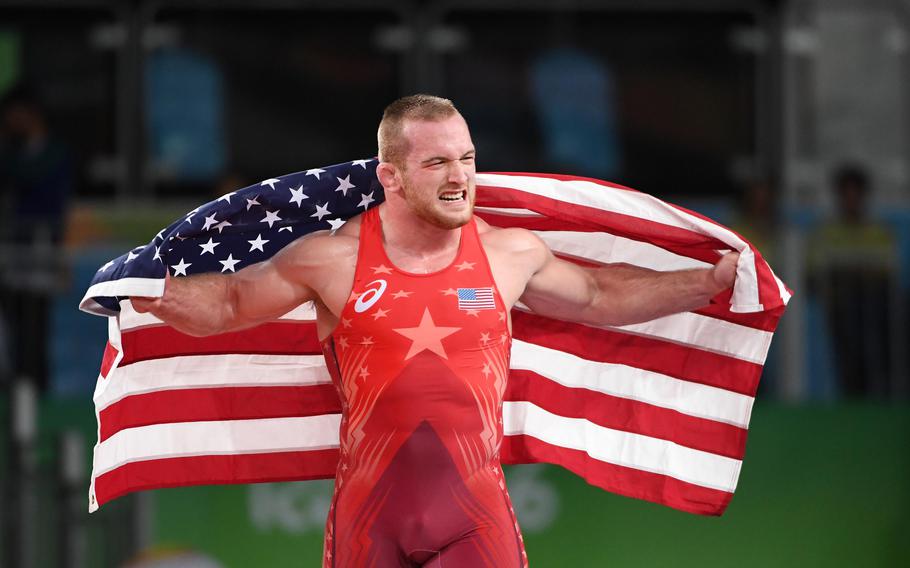 CHIBA, Japan - The most anticipated wrestling match of the Olympics had been flat, with "The Russian Tank" defeating "Captain America" 6-3 in a gold medal battle that failed to live up to its outrageous expectation, Saturday night.

And now it was time for the 97 kilogram freestyle medal ceremony and Kyle Snyder - the one known as Captain America - was the first out of the little room where medal winners wait inside the Makuhari Messe Hall. Behind him came the Russian Tank, Abdulrashid Sadulaev. The American ahead leading the wrestler from the Russian Olympic Committee who had just beaten him.

It's a misleading walk that medal winners take to medal ceremonies at the Olympics. The silver medalist goes first, then the gold winner, with the bronze medalist behind. It's done this way because of how the athletes will line up on the medal platform - gold always in the middle. But as they moved through the walkway toward the arena, the order was an odd juxtaposition of where their rivalry stands at this moment.

The two men, who might be the most powerful in wrestling, have met three times now and Sadulaev has won the last two. On Saturday, he seemed in control of the match the whole time.

"Unbelievable," Sadulaev said after the match. "I know this feeling because five years [ago] I became Olympic champion."

Once, they existed in parallel worlds of dominance. Both men won gold medals at the 2016 Olympics, Snyder tearing through the 97 kilogram weight class and Sadulaev thundering to victory at 86 kilograms. Then, Sadulaev moved to 97 in 2017 and the super rivalry was born, their nicknames perfect for a classic U.S.-Russia wrestling war.

When they first met at that year's world championships, Snyder won 6-5. It was the last time Sadulaev lost a match. In 2018, Sadulaev pinned Snyder for a victory. In 2019, Snyder lost early in the tournament, squashing any chance of another fight. In 2020 there were no world championships.

Which made Saturday night's match seem so big. In an interview the night before, Snyder, who has never appeared overly revealing about his feelings, admitted that he has thought a lot about Sadulaev. How could he not? It was all everyone was talking about.

When they finally wrestled again, late Saturday night, the setting seemed wrong for such a titanic matchup. The four sets of steel stands inside a vast convention center were empty, with only journalists and members of the American and Russian wrestling teams packed into a section close to the mat.

Perhaps, in an attempt to create some kind of tension and understanding the recent dominance of the Russian Tank, the U.S., wrestlers chanted Snyder's name. They pounded their feet on the steel bleachers. They clapped as one. They yelled "U.S.A.! U.S.A.! U.S.A.!" Sadulaev walked slowly into the arena. Snyder ran.

As the whistle blew, Snyder pounced. Sadulaev played defense. And that's the way it went. The two men circling each other, heads touching, arms on shoulders. Neither able to do much. Sadulaev won an inactivity point and twice got two point exposures. Essentially that was the match. Snyder's attacks were blocked. Sadulaev was too strong to take down.

Later, when they were done, Snyder would assess the match with little emotion, saying simply: "I'll have to go back and [watch a replay]. Definitely some positions I got to get better in, so that's what I'm thinking about."

He said little on Saturday, though there was a sense he probably wouldn't have had a lot more to add, had he won. He showed little emotion. If he was angry at the result he wouldn't say.

"I mean I'm a competitor so hate to lose and yeah so I know there's things I got to get better at," he said. "But it's the spirit of Jesus that's strong in me. I'm not that strong of a guy but Jesus is really strong so his spirit keeps moving forward."

Asked if Sadulaev is a different wrestler than that time they met in 2017, Snyder shrugged.

When someone wondered if Sadulaev is just too physically strong now to be beaten. Snyder paused for a second.

He laughed, It was the kind of laugh that said it was a thought he didn't want to consider.

Snyder brightened when someone brought up the nine wrestling medals the U.S., won at this Olympics, an enormous number, especially since they were all in freestyle and all five of the American men at these Games won a medal.

"Yeah guys are getting better and better, everybody's doing the right things and we got great coaches, great support staff, great training environments," he said. "So, really happy for my teammates, great job here and happy for the coaches too because they work so hard. I think we're going to dominate, keep getting better."

At the medal ceremony, he stood on the platform beside Sadulaev, holding a tiny bouquet in his hand, watching without hit of admiration or disdain as his rival held the gold aloft, pretending to bite it with his teeth.

In the stands, his American teammates who had done their best to make the Olympics' biggest wrestling match feel like it, slowly moved down the steps. A few stopped and looked at Snyder standing there with his silver. They waved goodbye. There wasn't anything more they could do on the night the Russian Tank kept on rolling.