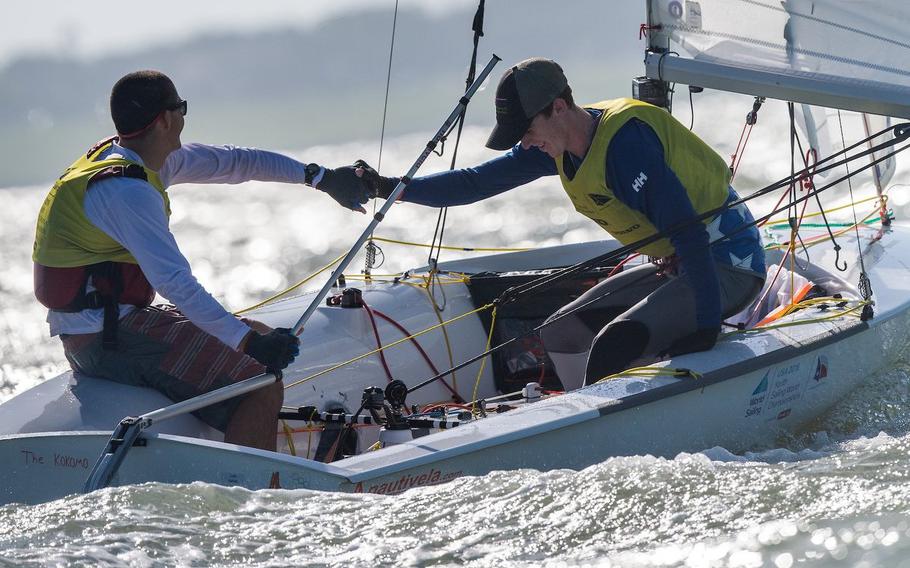 Hermus had competed internationally in the Optimist dinghy class and trained for several years with a top-flight regional program.

However, Burman’s excitement about the incoming prospect rose to another level after Hermus took a week off from plebe summer to compete in the Youth Sailing World Championship.

Hermus returned to Annapolis with a gold medal after winning the International 420 class. He and crew Walter Henry beat the runner-up team from Australia by a comfortable margin of 11 points.

Hermus has lived up to his billing and then some, earning All-America status all three seasons he’s competed for the Midshipmen. Now the Long Island native has etched his name into Navy intercollegiate sailing history.

During a virtual awards ceremony held June 29, the Intercollegiate Sailing Association presented Hermus with the Everett B. Morris College Sailor of the Year award. He becomes just the fourth Navy sailor to earn the prestigious honor and first since Ryan Cox in 1995.

“First of all, it’s amazing and I’m definitely grateful. However, I couldn’t have accomplished this without having my coaches and teammates behind me and helping me along the way,” Hermus said.

Hermus was runner-up behind Jacksonville’s Alfonso Garcia Bringas in A Division at the Gill Co-Ed Dinghy National Championship. That was the only regatta he did not win this past season.

With Hermus as the catalyst, Navy captured both the Gill Co-Ed Dinghy and LaserPerformance Team Race national championships.

“In terms of overall record over the course of the entire season, no one performed better than JC,” Burman said. “Anyone who watched Team Race Nationals was blown away by how well he sailed.” 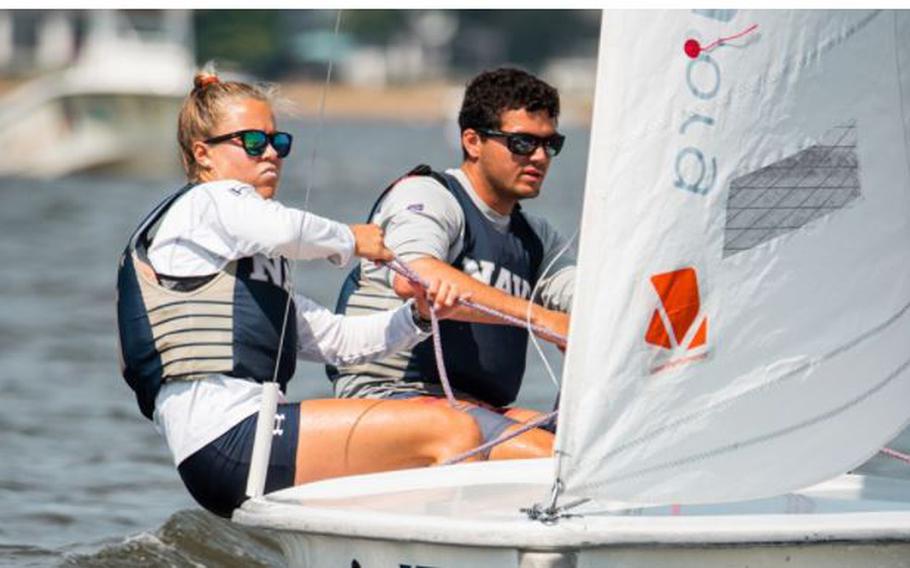 Navy junior Kimmie Leonard can also bask in the glow of the College Sailor of the Year award since she crewed for Hermus all season in both the team racing and fleet racing disciplines. The Annapolis High graduate was excited for her classmate upon hearing of the honor.

“JC is just an incredible sailor, and I honestly could not think of anyone more deserving,” Leonard said. “After losing last season, we were all determined to make the most of this season. JC definitely had a big attitude change and was so focused on competing at a high level every time we hit the water.”

Hermus wishes he could share the award with Leonard because the teamwork required by skipper and crew is so critical to success. Leonard has an impressive background herself, having captured three youth national championships as crew for Maddie Hawkins while representing Annapolis Yacht Club.

“While the award is in my name, it’s just as much Kimmie’s because she was in the boat with me the whole way,” Hermus said. “If there are ever questions or decisions that need to be made out of the racecourse, it’s better to have two minds thinking about it than one.

“Kimmie really knows what she is doing and is every bit as deserving of this award as I am.”

Hermus grew up sailing with the Bellport Bay Yacht Club junior program before transitioning to the Long Island Sound Optimist Team. He did not participate in high school sailing and was at a slight disadvantage when learning how to sail the Flying Junior and 420 boats that are used for college competition.

“It was a little bit of a transition for JC, but he adjusted well and figured out the short-course racing,” Burman said. “College sailing was the first time he’d been introduced to the team aspect of the sport. He has really enjoyed and embraced the concept of pursuing team goals.”

Hermus agreed with that assessment and said he learned how to operate within a team from fellow skippers Parker Loftus and Connor Bayless ( Severn School) to crew like Leonard and Fiona Lobon. Now he is the one passing that type of knowledge onto younger teammates.

“JC is a fantastic teammate who really works well with everybody,” Burman said. “Some of our new players have said they really enjoyed getting the chance to sail with JC because they learned so much about the finer points of boat trim and other techniques.”

Burman attributes the success of Hermus to natural talent, on-water instincts and a competitive nature. For a while, Hermus was determined to be the first boat to leave the basin at the Robert Crown Center and would race teammates to the docks following the pre-practice meeting.

“JC just has an incredible feel for the boat and understands exactly how to get the most out of it. He’s also one of the most competitive people I’ve ever coached,” Burman said.

“JC is an extremely hard worker and very dedicated to the details of boat speed and boat-handling. He is always testing boundaries and pushing to do things a little differently.”

Burman said the 2022 college sailing campaign will be more challenging. That’s because a large contingent of top teams opted out of competition this spring due to concerns about the ongoing pandemic. Also, Hermus will now be a marked man as reigning College Sailor of the Year.

“There were a lot of programs that took the year off, so certainly the depth of competition is going to be greater,” Burman said. “For JC, I think it’s just a matter of maintaining that intensity and focus every weekend when there’s a target on your back. Everyone is going to be coming after him.”