Some athletes battled wind and rain and avoided lightning. Others had to be flexible with limited track availability. And, of course, they couldn’t even see how it was going with their closest rivals.

Still, the 2021 DODEA-Europe Track and Field Championships came to a conclusion Saturday after six days of athletes competing on their own tracks across seven countries in Europe and the Middle East.

One record was set. Several athletes won multiple events. And the final sports championship from a school year scarred by the coronavirus pandemic is in the books.

“It didn’t go as planned,” said Kathy Clemmons, DODEA-Europe’s athletic coordinator. “But the coaches and athletes were resourceful and did what they had to do.”

Wiesbaden’s first go at the competition – where events were spread out throughout the week – was interrupted by lightning on Monday, first-year coach Jessica Jacobs said.

Kaiserslautern senior Griffen Parsells set a DODEA-Europe record in the 1,600 meters with a time of 4 minutes and 22.18 seconds. Lakenheath’s Austin Burt set the old mark of 4:24.16 in 2017.

“I’ve been hoping to beat it since my freshman year,” Parsells said Tuesday. “I wanted to go under 4:20, but I’m happy with the record.”

Parsells, who has committed to run track and cross country at Lewis-Clark State University in Idaho, is used to running by himself. He won at the European cross country championships earlier this season. The only other championship held by DODEA-Europe was marksmanship. Many other sports were cancelled entirely. Others were limited to practices on school.

“I’m glad we were able to do this,” Parsells said. “Especially after losing the season last year.”

It was a good week for the Parsells family. Griffen also won the 800. His sister, Piper, a sophomore, won the girls 800.

Her accomplishments were overshadowed by two other younger competitors on the girls side, though.

Jacobs said both athletes arrived in Wiesbaden this year, so should be among the favorites next year if there is a post-coronavirus environment.

Competing in a virtual environment can be a challenge, Jacobs said.

“Like all season, we just kept plugging away,” she said. “It was: ‘go out and compete against your teammates, yourself and the clock.’ They had to use a lot of mental imagery just to remain competitive.”

The most success by one team in a single event was Kaiserslautern taking four of the top five spots in the boys 200. The Raiders scored 28 points in that event alone. 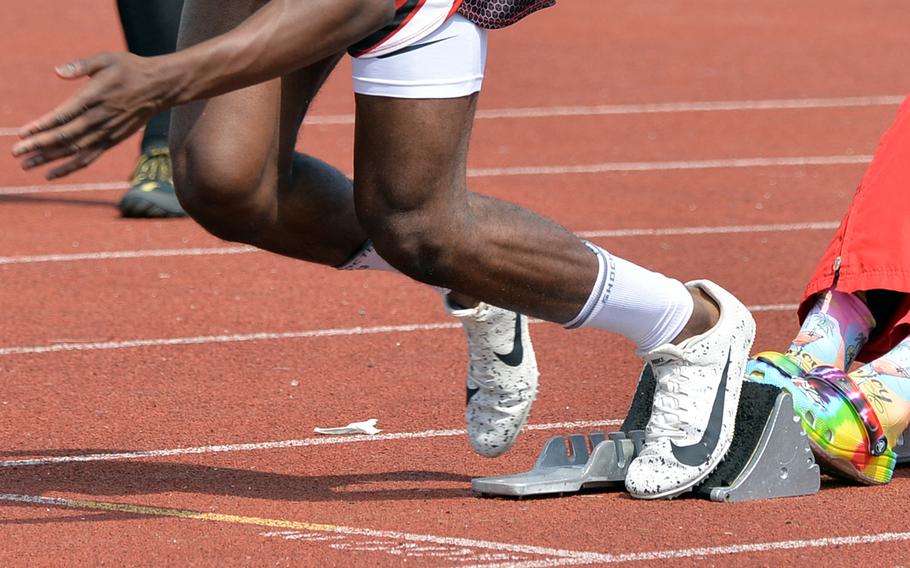 Buy Photo
The 2021 DODEA-Europe track and field championships could go down in history as the most unique, with athletes competing in seven countries in Europe and the Middle East thanks to travel restrictions imposed by the coronavirus pandemic. (Michael Abrams/Stars and Stripes)
Kent Harris