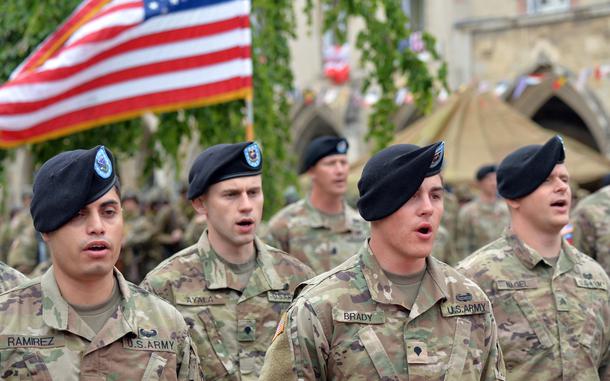 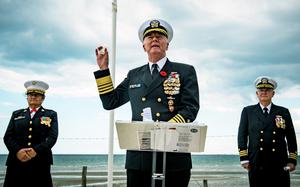 Navy’s top Europe commander pays tribute to D-Day frogmen at Normandy statue dedication
U.S. frogmen were among the Normandy war dead honored Thursday during a dedication of a Lone Sailor statue on a plaza overlooking Utah Beach. It was one of several ceremonies in the region commemorating the 75th anniversary of D-Day. 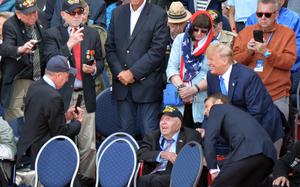 'Our debt to you is everlasting': Trump and Macron thank veterans on D-Day 75th anniversary
President Donald Trump joined other world leaders and surviving veterans to remember those who died in in the greatest amphibious invasion in history, which led to the liberation of Western Europe after four years of Nazi occupation.

D-DAY Story 5
CHANGE THE LEAD
D-Day at 75: Remembering the day that turned the tide
Seventy-five years ago tens of thousands of American, British and Canadian troops stormed the German-held beaches of Normandy in the largest seaborne invasion in history. Thousands died, and thousands more were wounded.

More than 60,000 civilian deaths a darker and largely ignored side of D-Day campaign
French noncombatants were killed in connection with a massive bombing campaign by the Allies, which began three months before D-Day to isolate the battlefield ahead of the June 6 ground invasion.

Bedford remembers: Virginia town still mourns 20 men lost during invasion
Bedford, Virginia, then a close-knit community of fewer than 4,000 people in the Shenandoah Valley, was home to Company A of the 116th Infantry Regiment, 29th Division. Of the 37 men called to fight, 20 died - all but one from the same company that saw significant action on D-Day.

From Salinger to Scotty: Honoring the famous veterans of D-Day
Most of the nearly 160,000 Allied troops who fought on D-Day are remembered for their heroism but not their names. Here are a few exceptions, including some who won fame for achievements after the war.

D-Day at the movies: rousing, gruesome, solemn and sometimes tragicomic
This is the day that changed the world; They depended on each other — and the world depended on them. So said the taglines for some of the best known movies and series that focused, at least in part, on D-Day.

D-Day's success was anything but guaranteed
Gen. Dwight D. Eisenhower had his resignation letter ready for a reason: the success of Operation Overlord was never a given.

Shadow of D-Day stretches throughout modern history
It was a day that defined the world for generations. On June 6, 1944, about 160,000 American, British and Canadian troops stormed five beaches along a 60-mile front in Normandy in the largest seaborne invasion in history. Seventy-five years later, the world still lives in the shadow of D-Day.

D-Day at the movies: rousing, gruesome, solemn and sometimes tragicomic
This is the day that changed the world; They depended on each other — and the world depended on them; In the last great invasion of the last great war, the greatest danger for eight men was saving ... one; The real glory of war is surviving; Swinging’s their game and London will never be the same!