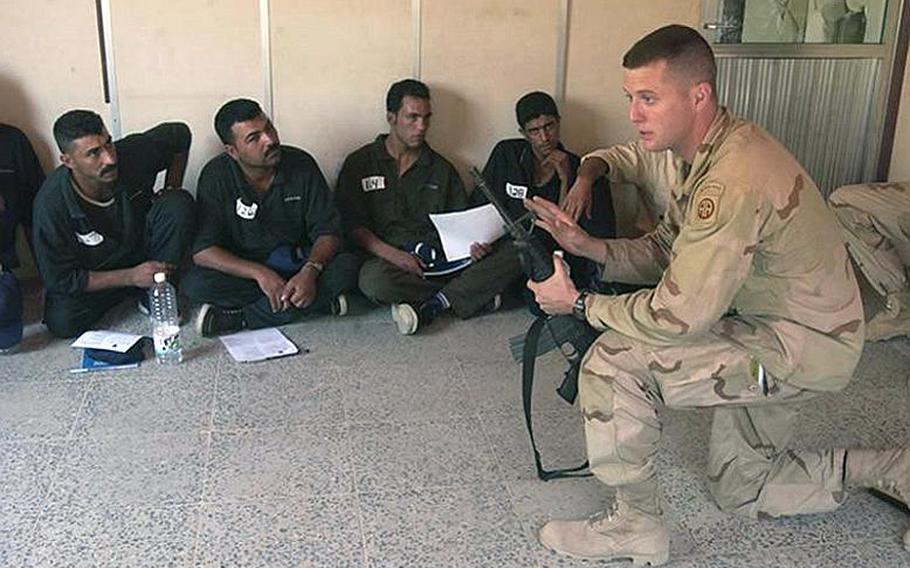 “I remember being mortared, and thinking it was so close we would definitely get hit, then thinking to myself, ‘I just hope it doesn’t scar my face,’” Murphy said. “I thought I could always get another leg. But if it hit my face … That’s what goes through your head.”

But he grew more bitter about the war with each passing month, wondering why his soldiers were supplied with out-of-date body armor and vulnerable vehicles.

“Not to put the country’s complete resources behind getting armored vehicles for our troops,” he said, “that’s something that should haunt members of Congress who had that responsibility.”

That anger helped transform Captain Murphy into Representative Murphy — the first Iraq veteran elected to Congress. Since 2006, he has served as the face of the next generation of U.S. servicemembers on Capitol Hill, and he’s become a fixture at press conferences on military policy and veterans benefits.

The Iraq war was a defining issue of George W. Bush’s presidency, deepening the chasm between conservatives and liberals and eventually paving the way for the election of President Barack Obama and a Congress controlled by Democrats.

Yet the actual servicemembers who fought the war remain largely at the edges of the political process. The number of lawmakers who have served in the military has dropped steadily since the mid-1990s, and despite several dozen candidates with Iraq war experience, only a few have managed to win a seat in Congress.

Murphy still speaks of his work in Baghdad with considerable pride, and remains close with the men he served alongside.

But when he ran for Congress it was on a strong anti-Iraq platform, shaped largely by his work on Sen. John Kerry’s presidential campaign in 2004. After Murphy was elected, he quickly emerged as a vocal opponent of U.S. operations there.

“You have to separate the war from the warrior,” he said. “I have a bond with the men I served with. You become brothers. But when I became a witness to our foreign policy there, I felt I had to stand up and not defer to folks in Washington who never wore a uniform.”

In his first term, the boyish Pennsylvania Democrat sponsored or backed more than 80 veterans and military policy bills, helping push through massive changes to veterans education benefits and increases in funding for troops fighting the Iraq war.

The son of a Philadelphia police officer, Murphy says he feels out of place in Washington. Even after four years in office, his speeches are still wooden.

The 36-year-old travels home to his suburban Pennsylvania district nearly every weekend to spend time with his wife, son and daughter, all of whom know only the post-Army Murphy. 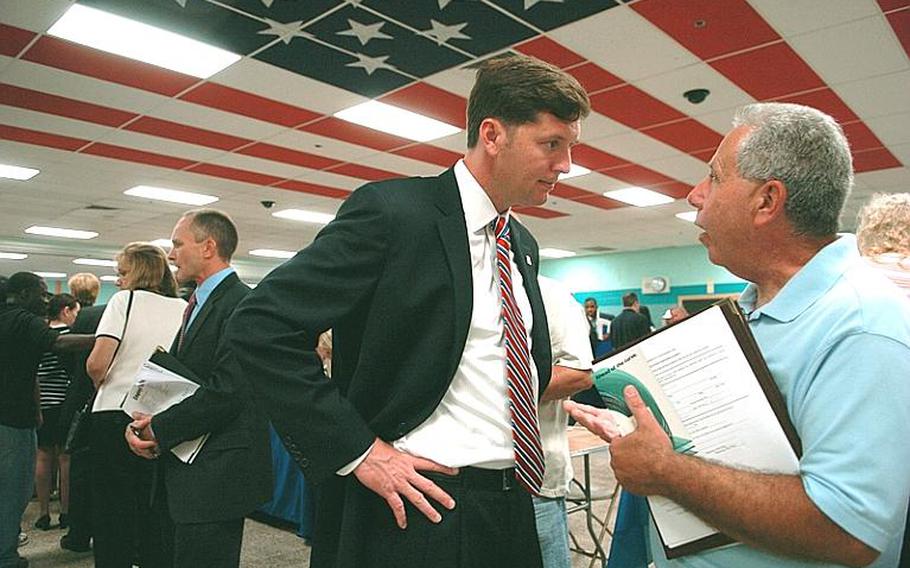 Jon Soltz, founder of VoteVets.org, remembers asking Murphy on election night in 2006 how he had managed to collect enough money to win without any real background or interest in fundraising.

“He told me, ‘In the Army you don’t like to get up and do physical training, but you have to do it,’ ” Soltz said. “He’s a hard worker. He knows what needs to be done, and he just finds a way to take care of it.”

More than a desk job

Murphy grew up in Philadelphia, attended two Pennsylvania colleges and quickly returned to the state once he left the Army. He still counts among his friends several who knew him as a young teen. He boasts about his teenage years working as a “125-pound security guard” at Philadelphia Eagles games.

Murphy said he was an average student in high school and credits his decision to join the Army Reserve Officer Training Corps in college with getting his life in order — although he also admits that as the son and grandson of military men, some form of service was “likely inevitable.”

In his autobiography, Murphy wrote that the Sept. 11 attacks inspired him to volunteer for overseas deployment, with the hope of fighting in Afghanistan. But he embraced assignments in Bosnia in 2002 and Iraq a year later.

During his 2006 congressional campaign, he fought off accusations that the Baghdad assignment was nothing more than a desk job, and he still bristles at what he calls “swift boating” by Republican opponents.

“I know what it’s like to ride in a Humvee without any doors or armor,” he said.

His Bronze Star citation notes his work prosecuting insurgents and paying out claims to Iraqi civilians but also details Murphy’s role as a convoy commander for 75 missions outside the wire, “all resulting in mission accomplishment and no soldiers killed or wounded in action.”

Murphy also knows firsthand the personal problems troops can face once they return home. His first fiancee, also a soldier, broke off their engagement after he finished his deployment; the two had “grown apart” in his absence, he said.

Murphy contemplated staying in the Army but never saw himself as a career soldier. He was also dissatisfied with the national political discussion on Iraq. The night he separated from the Army, he volunteered to work for the Kerry campaign, at the time calling him “the one person who could bring about the change we needed in the war.”

The experience stoked his political ambitions, and his status as an Iraq veteran was key in winning over Pennsylvania’s conservative 8th District, which for the first time in decades saw its party affiliation shift to the Democrats.

“Part of that was his role as a veteran, but we had 10 other Iraq war vets running and none of them won,” Soltz said. “People could see he was a leader. He made hard decisions. He was willing to fight for what he believed, even if getting elected was a long shot. And I think that’s really why he won.”

Just weeks after Murphy took office in 2007, following Bush’s announcement of a surge of 20,000 more servicemembers into Iraq, the freshman representative signed on to several bills calling for the quick withdrawal of U.S. troops.

Murphy, along with most of his Democratic colleagues, labeled the surge plan “delusional” and “reckless.”

“The time for more troops was four years ago,” he said in an emotional speech on the House floor. “This is what the president’s proposal does: It sends more of our best and bravest to die refereeing a civil war. … It is immoral to send young Americans to fight and die in a conflict without a real strategy for success.”

His stance drew sharp criticism from conservatives, especially after the surge strategy helped stabilize Iraq over the next two years. And Murphy’s controversial comments inspired his election challenger the following year. Tom Manion, whose son Travis was killed in Iraq while serving with Marines deployed in the surge, called Murphy’s stance cowardly and disrespectful to the troops overseas.

But Murphy remains unapologetic for those votes.

“Before you commit young American heroes and put them in harm’s way, you better sure as hell know it’s for the right reason,” he said. “There were thousands of innocent Americans murdered on 9/11, and they were murdered by al-Qaida and Osama bin Laden. We still need to bring him to justice. And Iraq was a diversion from that focus.”

Voters in his district embraced (or at least ignored) the controversy and easily re-elected him to another term. But Murphy is bracing for a tougher election fight this fall. He’ll face Mike Fitzpatrick, the incumbent he narrowly beat in 2006, and Murphy said the tone of the campaign is already dramatically different than four years ago.

“People don’t ask me about [the wars] as much, and that’s disheartening,” he said. “We still have heroes dying over there every day.”

Most of the discussion focuses on the economy, especially complaints about the bailouts for the financial and auto industries.

Murphy struggles to make veterans issues a conversation point, weaving the topic into his stump speeches by pointing to a new veterans care facility in the Philadelphia region and detailing plans to fix the broken Veterans Affairs health system.

“I get out front and talk to people about those issues,” he said. “I’m very proud of my military service, and of what our troops are doing. The Congress won’t forget about them as long as I’m there.”