'I chose the right way, and no one rewarded me' 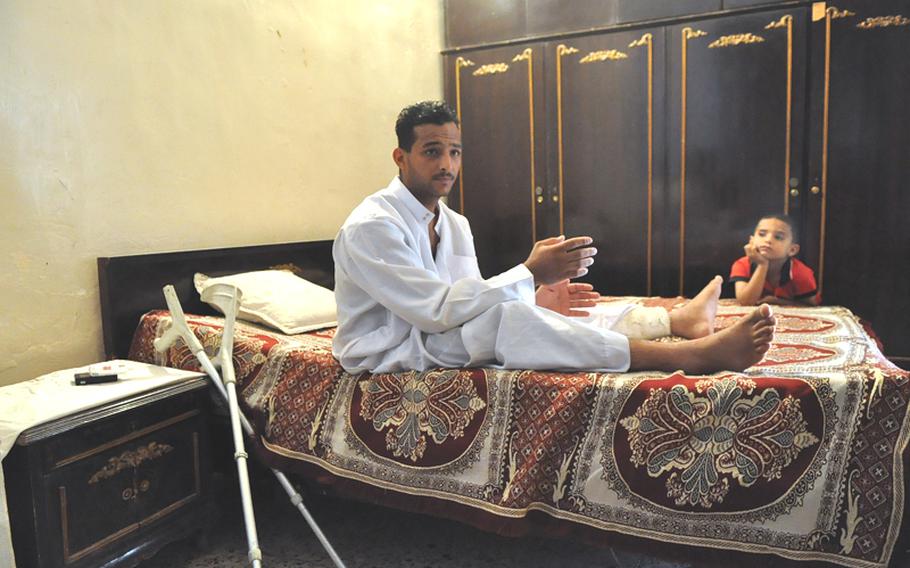 Fadel Nathem talks about his life after being wounded by a suicide car bomber in September 2008. Nathem was the equivalent of a specialist in the Iraqi army when he was wounded. His brother listens at right. (Michael Abrams/Stars and Stripes)

BAGHDAD — Fadel Nathem’s memory fails him these days. His mother must step in to help him piece together a sweltering day in September 2008.

“There were many people who betrayed Iraq and joined the terrorists,” Nathem said. “I chose the right way, and no one rewarded me.”

Thirty years old, with a boyish face and thick black hair covering scars from the explosion that shattered his legs and left him in a coma, Nathem spends his days languishing in bed. He is unable to walk, unable to work and unable to pay for his medical care nearly two years after a suicide bomber detonated a car packed with explosives next to his military pickup truck.

Nathem’s story is as dismal as it is pedestrian in a country long on war wounded and short on veterans care. There is no Walter Reed Army Medical Center in Iraq. The pensions and lifetime care given to American troops are nowhere to be found here.

Simply put, Iraq has abandoned its veterans. Some live in rusting shipping containers, some beg in the streets. Few have access to proper medical care.

Many of the tens of thousands of Iraqi soldiers, police and border guards estimated to have been wounded in the war that followed the 2003 U.S. invasion have been left not only permanently disabled, but reduced to penury as well.

In Iraq’s two-track system of veterans care, officers are treated to top medical treatment when wounded, even getting specialized care abroad at government expense. The much more numerous enlisted soldiers, who take the bulk of the risks and are frequent targets of insurgent bombs and bullets, get a one-time payment of less than $1,000 and are sent to government hospitals that rarely can deal with complex injuries.

Many move to private hospitals, which offer better care at a premium rate, but the government does not reimburse those costs.

Officials with the Iraqi Ministry of Health dispute the notion that government hospitals are unable to adequately care for seriously injured soldiers. Those who opt for private hospitals are making a mistake, said Dhia al-Shadr, the director of the government-run al-Karkh hospital.

“Private hospitals are like hotels,” he said, offering a bed and not much more. Fadel Nathem was the equivalent of a specialist when he was wounded by a suicide car bomber in September 2008. With him in the room where he lives is Mariam, his 4-year-old daughter, Yasra Abd Ali, his mother and main caretaker, and his youngest brother. (Michael Abrams/Stars and Stripes) 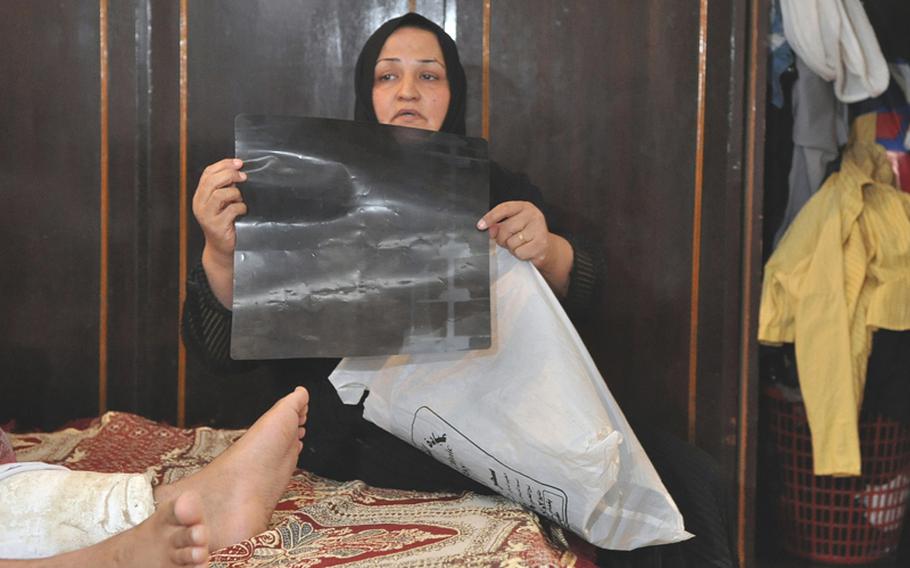 Yasra Abd Ali, Fadel Nathem&#39;s mother and main caretaker, shows an X-ray of his leg. She keeps his records and photos of him after he was wounded by a suicide car bomber in September 2008 in the plastic bag. (Michael Abrams/Stars and Stripes) 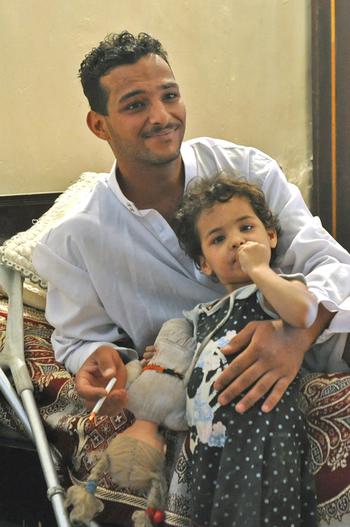 Fadel Nathem, an Iraqi soldier wounded by a suicide car bomber in September 2008, with his daughter, Mariam, 4. (Michael Abrams/Stars and Stripes) 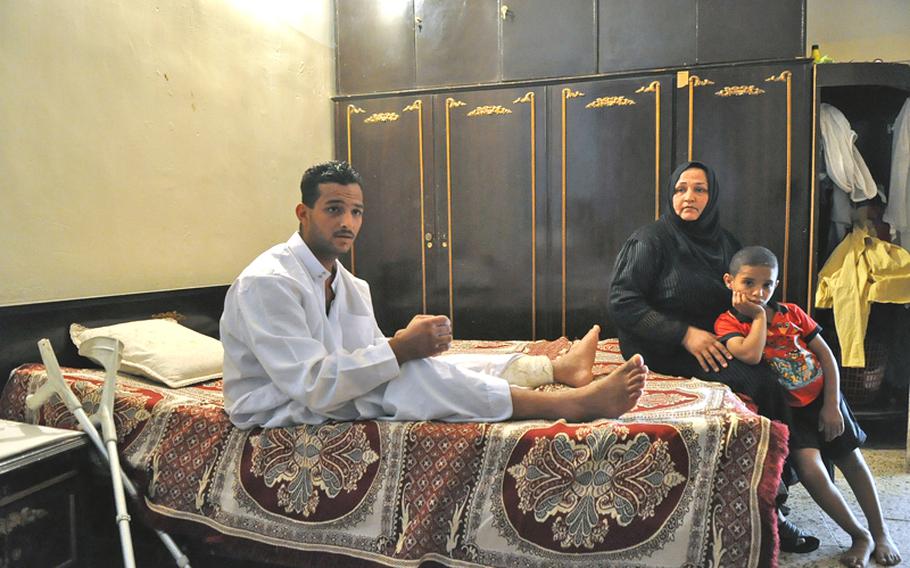 Fadel Nathem, was the equivalent of a specialist when he was wounded by a suicide car bomber in Sept. 2008. With him in the room where he lives is his mother Yasra Abd Ali, his main caretaker, and his youngest brother. (Michael Abrams/Stars and Stripes) 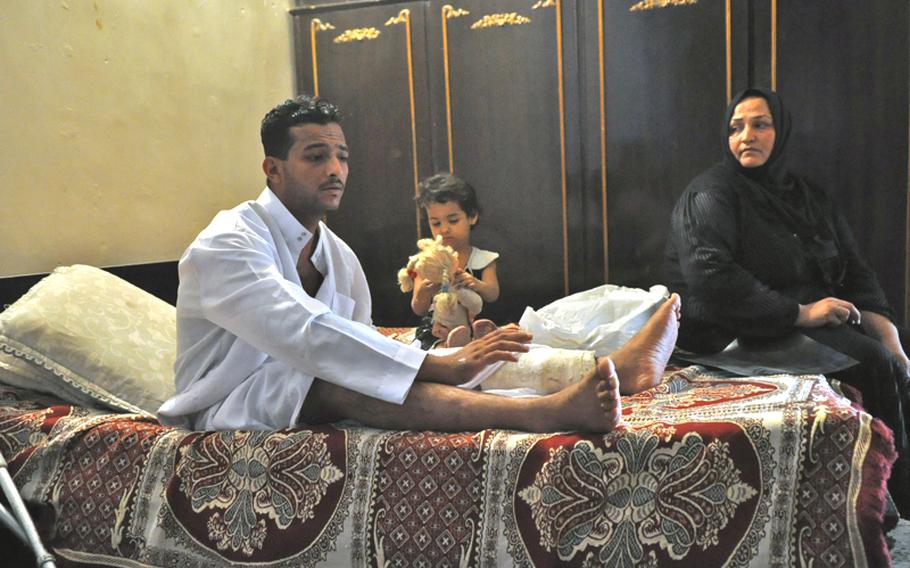 Fadel Nathem was the equivalent of a specialist when he was wounded by a suicide car bomber in Sept. 2008. At center is his four year old daughter Mariam, at right is Fadal&#39;s mother Yasra Abd Ali, his main caretaker. (Michael Abrams/Stars and Stripes) 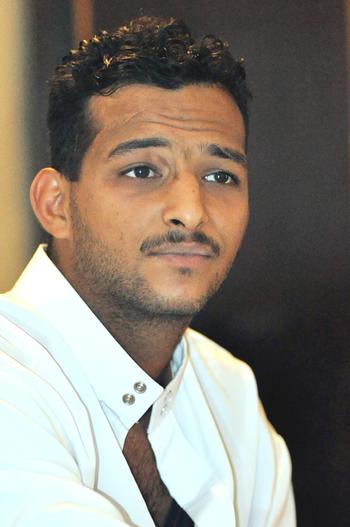 Fadel Nathem was the equivalent of a specialist when he was wounded by a suicide car bomber in September 2008. (Michael Abrams/Stars and Stripes)

Yet the man who directs the Ministry of Defense program to compensate wounded soldiers and the families of soldiers killed in action blasted the government’s treatment of wounded enlisted men.

“Our government hospitals are not good enough to treat many cases,” conceded Ali Adnan, “so sometimes soldiers go to private hospitals and pay out of their pocket.”

Even receiving the meager payout for injuries promised by the government can be a burden for soldiers who live outside of Baghdad. They must pay their way to the capital, an often expensive, dangerous journey, just to fill out paperwork.

“They are very poor,” Adnan said. “Sometimes they don’t have the money to make copies of their documents.”

The huge disparity in treatment of officers and enlisted soldiers is not only unfair but a danger to the country, because it destroys morale within the enlisted ranks, he added.

“It really affects their attitude and behavior and their work in the street,” he said. “He’s the one in the street, he’s the one who faces danger. He’s also the first one to get blamed when something happens.”

Before the war, Nathem worked as an electrician, but struggled to support his wife and infant daughter. In 2007, he joined the Iraqi army to earn a better salary.

Assigned to the unit guarding the Iraqi president’s compound in Baghdad, Nathem and his fellow soldiers were on their way to pick up new body armor and uniforms in a convoy of pickups that day in September 2008. A car packed with explosives pulled up alongside their trucks, and Nathem felt a thud. He woke up in a hospital a week later, with his head wrapped in bandages, pins and plates holding together his shattered legs and painful burns slashing across his upper body and head.

Shortly afterward, he was transferred to another government hospital for three weeks to receive advanced care. He says the hospital was ill-equipped to handle his injuries and that doctors wanted to amputate one of his legs. After an epidemic of infections started sickening patients amid unsanitary conditions, he moved to a private hospital where doctors were able to treat his wounds without amputation, but at a premium.

Nathem hasn’t heard from the military since the bombing.

“After my injury, nobody came,” he said.

His bills have reached the equivalent of about $10,000, a fortune in Iraq. His doctor says that in order to walk again, he must get surgery outside of Iraq. Yet Nathem can barely afford cab fare to get to his local medical appointments.

“We sold our furniture to get him medicine and treatment,” said his mother, Yasra Abd Ali, gesturing toward a nearly bare room.

Despite the hardships, Nathem says he has one wish: to recover enough to rejoin the Iraqi army.

Leaving large populations of wounded and mentally scarred veterans untreated can have broad economic and social consequences, said Ryan Edwards, an economics professor at Queens College, City University of New York, who was a member of a committee that released a report on veterans care needs for the Institute of Medicine earlier this year.

In Iraq, where a much larger portion of the population has been affected by the war than in the U.S., those effects are likely to be magnified.

“It’s a fairly large chunk of the labor force,” Edwards said. “If you don’t treat them, they’re not going to be very productive in the future. From a mental health angle, if you don’t treat that, you can have a very embittered generation.”

Nathem and 15 members of his family live in a dilapidated four-room concrete house they rent on a rutted dirt side street of Sana’a, in central Baghdad. They share a single bathroom. He finds strength in his tight-knit family but admits that the close quarters are a hardship.

His extended family must now subsist on the meager incomes of two of his brothers, one who works as a mechanic and another who drives a horse cart, selling flour and other staples.

Nathem’s stony, resigned expression is broken only when his 4-year-old daughter, Mariam, herself suffering from a disease that has left her blind in one eye, clambers onto his lap.

Since the bombing, Nathem’s family has fallen into debt and relies on the kindness of neighbors to get by. He is supposed to see the doctor every month, but he often has to delay appointments for weeks until he can scrape together enough money to go.

His face flushes with shame.

“I feel humiliated to go and beg for money,” he said.