For all the good Fauci did, he should have exited the stage sooner 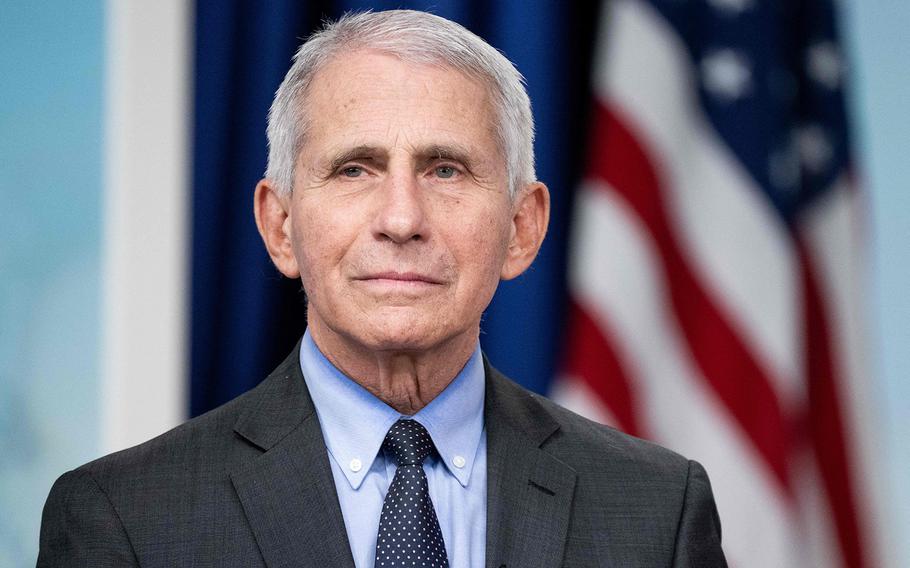 Dr. Anthony Fauci, then the White House Chief Medical Advisor and Director of the National Institute of Allergy and Infectious Diseases, attends an event with First Lady Jill Biden to urge Americans to get vaccinated ahead of the holiday season, during a COVID-19 virtual event with AARP in the Eisenhower Executive Office Building in Washington, D.C., Dec. 9, 2022. He recently stepped down. (Saul Loeb, AFP via Getty Images/TNS)

(Tribune News Service) — Dr. Anthony Fauci, who began his career at the National Institutes of Health during Lyndon Johnson’s administration, has stepped down as director of the National Institute of Allergy and Infectious Diseases and chief medical adviser to President Joe Biden. To put it in perspective, after more than five decades of distinguished and controversial government service, his legacy will be bittersweet — not quite the hero his supporters lionize or the villain his detractors portray.

Judged by his medical record alone, Fauci is in the top echelon of American physicians. He did groundbreaking work in immunology and helped develop lifesaving drugs for serious rheumatologic diseases. He discovered how to re-dose certain cancer drugs, turning a 98% mortality rate for one disease into a 93% remission rate. His honors include a Lasker Award, the highest award in biomedical science other than the Nobel Prize, and the Presidential Medal of Freedom, the highest civilian award in the United States, given to him by President George W. Bush in 2008.

But there is more to the story. F. Scott Fitzgerald famously observed, “There are no second acts in American life,” but Fauci did have a second act when he switched specialties from immunology to infectious diseases just before HIV/AIDS began to sweep the world. By virtue of his government position, Fauci became the U.S. point person for the global HIV epidemic.

His early efforts were criticized by the gay community for the government’s tentative initial response to the crisis and the sluggish pace of drug development for HIV. Fauci’s harshest critic was prominent activist and gay rights advocate Larry Kramer, who castigated Fauci publicly and went so far as to call him a “murderer.”

Fauci didn’t retort, and eventually he and Kramer became friends, working together to revolutionize government drug trials and increase patients’ access to experimental drugs. Ultimately, it was for his work in AIDS relief that Fauci received the Presidential Medal of Freedom.

When COVID-19 hit in 2020, Fauci had been with the NIH for more than 50 years, and he became the government’s chief medical spokesperson for the pandemic. He had to walk back some of his early pronouncements on de-emphasizing masks and predicting herd immunity.

He was an advocate of aggressive lockdown measures, which infuriated conservative politicians who anticipated the resulting damage to commerce and children’s education. Elon Musk recently tweeted, “My pronouns are Prosecute/Fauci.”

Much of this criticism is unfair and unwarranted. Many of Fauci’s early statements arose from uncertainties in the first stages of the pandemic. However, none of this absolves Fauci from the most serious charges against him as pandemic spokesperson, which include suppressing dissent from the Great Barrington Declaration and a disturbing reticence to candidly discuss gain-of-function research.

In an email to Fauci, Collins wrote: “This proposal from the three fringe public health researchers ... seems to be getting a lot of attention — and even a co-signature from Nobel Prize winner Mike Leavitt at Stanford. There needs to be a quick and devastating published take down of its premises. ... Is it underway?” Fauci complied willingly, the Great Barrington Declaration was publicly trashed and its otherwise respected signatories became pariahs in academic circles.

Whether right or wrong, the Great Barrington Declaration would have stimulated public debate and greater scientific analysis of the pandemic, which was badly lacking. Fauci has been quoted as “representing science,” but it is anti-science to silence dissenting opinions and attack other scientists who are acting in good faith.

Likewise, gain-of-function research, in which viruses are manipulated to adopt new characteristics, may have played a role in the origin of COVID-19. Such research occurs in China, and Fauci is one of the few people in the world knowledgeable enough to explain its potential benefits and dangers. For whatever reason, with all the interviews Fauci does, he rarely, if ever, alludes to it and has never explained the subject in depth to the public.

In the final analysis, Fauci’s biggest failing was not exiting the stage earlier. The federal response to COVID-19 that he led was sclerotic. A newer generation of doctors and scientists, who had difficulty advancing during Fauci’s tenure, might have been more open and flexible.

For all the good things he has done, Fauci, like sports greats Willie Mays and Muhammad Ali, hung on too long.