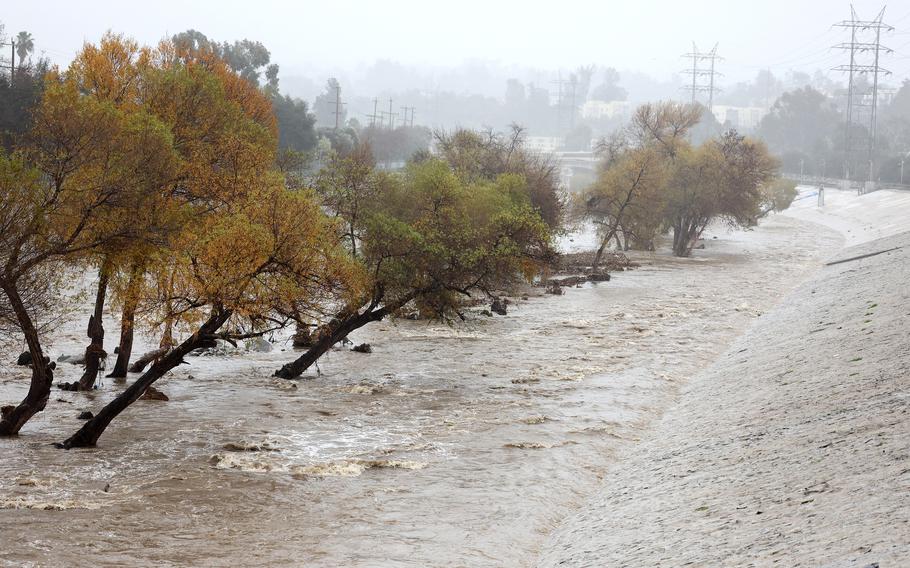 (Tribune News Service) — When Los Angeles finds itself at the mouth of an atmospheric river, I like to imagine watching the storm from a mountaintop. I have a particular one in mind — Muir Peak, which reaches a modest 4,688 feet in elevation but offers a starker view of the LA Basin than more notable peaks nearby.

Muir is one of the high peaks in the San Gabriel Mountains front range that sits closer to developed Los Angeles. The rise from low-lying civilization to mountain wilderness is so steep that when looking south from the summit, Altadena’s leafy blocks seem to disappear underneath the yucca blades and dried shrubs at your feet.

From this perch, with a view from the San Gabriel Valley to Catalina Island, Los Angeles is easily imagined in a wilder state — before the landscape was subdivided, graded and paved over. Today, even storms as strong as the ones that have been soaking the area since late December couldn’t alter the appearance of the tidy neighborhood grids down below.

Los Angeles owes its continued existence to the concrete encasement of its shallow rivers and washes in the last century. By design, much of the water that falls is swiftly carried out of sight and into the ocean. Instead of roaring through the mouths of numerous canyons, the water is shunted away by neat channels as soon as it encounters suburbia. A couple of centuries ago, the floodwaters would have continued unimpeded into alluvial plains, lush forests and swamps, which helped to store the water and fill underground aquifers.

Looking down from Muir Peak, you can picture how rivers flowed in their natural state before 13 million people settled in the Los Angeles Basin. Before the 1920s, locals knew the San Gabriels also as the Sierra Madre — the “mother mountains,” from which the water that sustained them flowed, and where the sediment that forms the land beneath us originated. Today, our relationship with these mountains and the water that drains from them is irreversibly different. The peaks and canyons that once gave life to a few thousand people in their shadows are now better known for producing devastating wildfires and storm-driven debris flows. The entombed flood-control channels took the place of rivers that could shift course and fan out freely over the LA Basin, dispersing water and rich soils.

The engineering to push the water into the sea worked exactly as designed. The 1938 storms that caused the Los Angeles River and other major waterways to overflow their unfortified banks resulted in devastating deaths and destruction. Without the concrete channelization of those rivers, a flood of that magnitude today would kill an even higher number than the roughly 100 people who died then.

And we also need to store that water, now more than ever. Between 30% and 40% of the water we use in LA County is pumped from the aquifer underneath us, and we’ll have to rely more heavily on local sources as water deliveries from outside Southern California become less dependable due to climate change. County voters aided the transition by passing a parcel tax funding water capture projects in 2018, but the infrastructure improvements that help mitigate what we’ve built over the last century will take decades to finish.

We can help our groundwater supplies somewhat by replacing whatever impenetrable hardscape we have in our yards with permeable surfaces, and we can build denser housing in lieu of suburban-style developments to reduce the need for covering new land. And of course, continue conserving water. Then conserve more.

As we work to mitigate some of our flood-control excesses, and as we come to understand what a place like Owens Valley was before Los Angeles drained it, we should appreciate what nature provided Los Angeles before our predecessors turned it into a concrete drain. And for anyone who needs some perspective, take a hike into our mountains — after the rain stops, of course.