Biden isn’t coming for your gas stove. The states are.

This month’s battle of the stovetop was seemingly over almost as soon as it began. Within days of a Consumer Product Safety Commission official raising the concept of banning gas stoves to address indoor pollution, the agency’s head and the White House itself scrambled to assure Americans that their kitchens were safe from the feds.

In Washington, however, the natural gas industry may have its eyes trained on the wrong adversary.

Roughly 40% of U.S. households cook with gas, a practice that amounts to less than 0.5% of U.S. consumption. As I wrote here, though, that belies the importance of cooking in fostering a personal affinity for what is, after all, an invisible fossil fuel. “This week’s episode of range rage underscores how personal energy policy decisions can be for end-users,” as Kevin Book of ClearView Energy Partners put it. Find a way to break that link, and gas demand writ large becomes more vulnerable in this era of climate change.

Yet it is fanciful to believe that break will emanate from the federal government, especially one now incorporating this particular Republican-controlled House. The past year showed that, even with unified government, Democrats had to adopt a climate policy that was all carrots and no sticks, and even then passed only via budget reconciliation. Don’t forget, too, this Supreme Court’s eagerness to swat down federal agencies, as we also saw last year and where Associate Justice Neil Gorsuch already has form vis-a-vis the CPSC.

No, it is the states the gas industry needs to worry about. And that is mainly because of where the country’s gas stoves are installed.

The states where gas ranges are relatively popular — as in, above the roughly 40% national average — tend to be in the Northeast or out West. Conversely, electric stoves dominate the South and large swaths of the Midwest. This is largely a function of legacy. Older Northeastern and mid-Atlantic cities built early gas networks, including for street lamps, making stoves a natural market extension. Meanwhile, California, which leads the nation in both percentage and absolute terms for household gas cooking, produced a quarter of the world’s oil supply a century ago — and oil producers are always looking for someone to take their gas.

That regional dispersion means those little flames warming up the dinner tend to be blue in more ways than one. To quantify this, I sorted the states in terms of the degree of unified control of their legislature and governor’s mansion, along with who they favored in the 2020 presidential election. Some 38 states have a Democratic or Republican trifecta, with virtually all of them selecting President Joe Biden or former President Donald Trump accordingly. Here is how that stacks up with regard to stoves.

More than half the nation’s households using a gas stove are in states with unified Democratic control and where Biden won. Throw in states where Biden won but government is divided, and the blue-ish share rises to more than two-thirds. New York alone, whose governor just proposed making it the first state to ban gas appliances and heating in new construction, is home to almost 1 in 10 U.S. households with a gas stove. California, where Berkeley began the trend of cities enacting bans on new gas hookups, hosts 1 in 5. Indeed, the 16 bluest states account for a similar proportion of residential gas demand overall, at 52%.

Washington’s division, sharpened by the midterms, makes the states even more important battlegrounds over energy and climate policy. We see this in the flurry of anti-ESG (environmental, social and governance) legislation in redder states and ever more ambitious green agendas in their bluer counterparts. It is the latter that pose the bigger threat to gas demand via regulation, not merely because of their ambition but also because they are where those home fires burn most.

Liam Denning is a Bloomberg Opinion columnist covering energy and commodities. A former investment banker, he was editor of The Wall Street Journal’s Heard on the Street column and a reporter for the Financial Times’ Lex column. 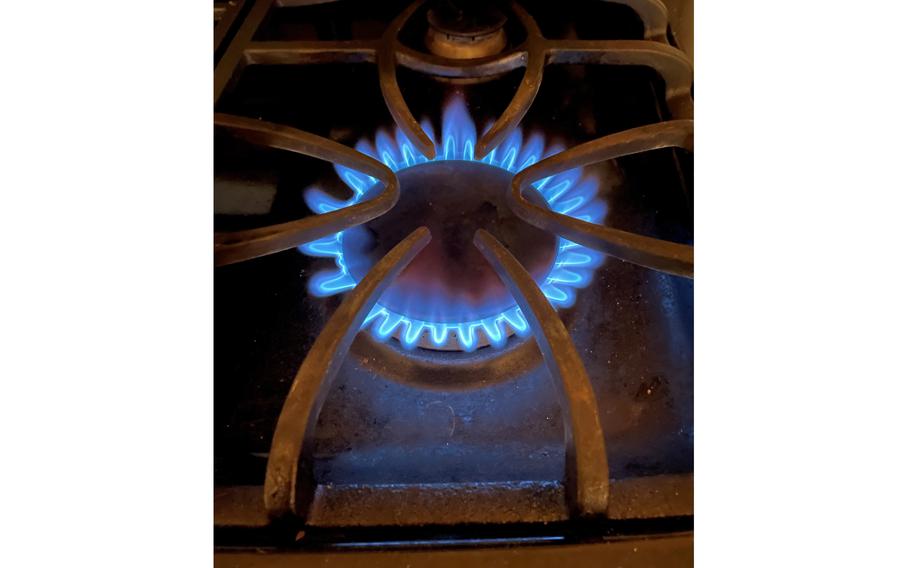 Roughly 40% of U.S. households cook with gas, a practice that amounts to less than 0.5% of U.S. consumption. (Stars and Stripes)