The concession Kevin McCarthy shouldn’t have made 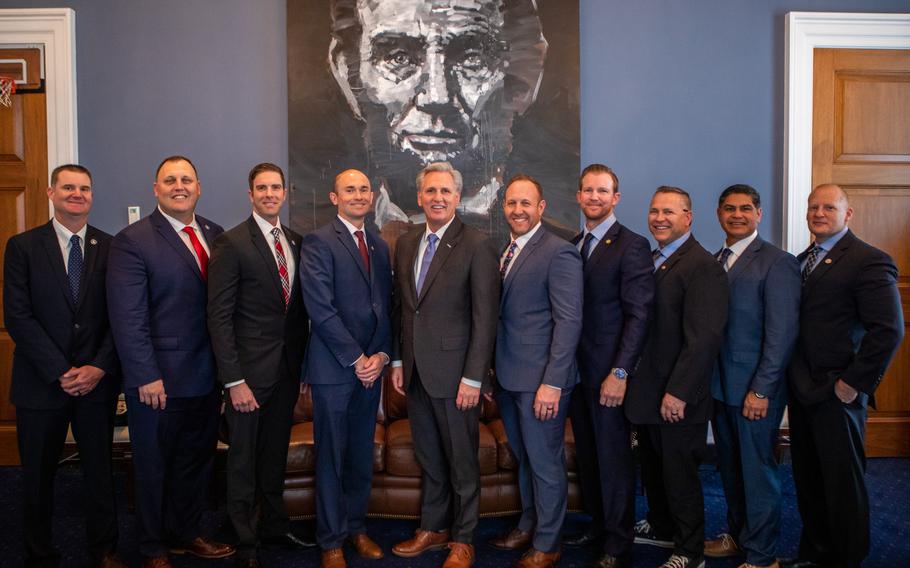 The deal, which wasn’t part of proposed rule amendments adopted Monday evening, is far more significant than the much-ballyhooed change allowing a single House member to essentially call a vote of no-confidence against the speaker. Threatening the speaker’s job is messy, and as aggressive as the dissidents might be, the mechanism isn’t something likely to see everyday use. (Kevin McCarthy/Twitter/Wiki Commons)

Rep. Kevin McCarthy made many concessions in his bid to become speaker of the House. But his offer to allow the hard-line House Freedom Caucus to select three of the nine Republicans on the powerful House Committee on Rules stands out for its ability to diminish the influence of the Republican Party within the House. It will grant a handful of extremists outsize power in Congress, reducing the Republican Party’s ability to govern.

The deal, which wasn’t part of proposed rule amendments adopted Monday evening, is far more significant than the much-ballyhooed change allowing a single House member to essentially call a vote of no-confidence against the speaker. Threatening the speaker’s job is messy, and as aggressive as the dissidents might be, the mechanism isn’t something likely to see everyday use.

By contrast, handing seats on the Rules Committee to a small, radical faction institutionalizes their influence in a way that will come into play on every single bill the House considers, because every bill must go through that committee in order to be considered by the full House.

Strict party rule in a closely divided chamber is controversial but perhaps justified; having a small minority of that party dictate to everyone is something else. That would be true of any small faction gaining excessive power, let alone one mostly known for seeking to overturn the 2020 election.

To understand why, it helps to know how the current system works. Bills in the House begin in committees, such as Agriculture or Foreign Affairs. Those that are approved by a committee vote are sent on to the full House for consideration. But before that happens, bills need what the House calls a “rule” — the procedure under which they will be considered, including which amendments will be allowed, and other procedural quirks. That’s what the Rules Committee provides. A bill that passes Armed Services or Ways and Means can’t be considered by the full House until it also passes through Rules. And the committee’s influence is vast; it isn’t unusual for legislation to be entirely rewritten by Rules.

So as a matter of standard procedure, every Republican bill will be hostage to a tiny bloc within the party. It won’t take an extraordinary revolt. It will be built in.

Having even a single Rules Committee member loyal to a faction, and not to the leadership and the entire party, would be a major change that would make it harder for Republicans to function as the majority. Going further and giving the faction three seats? That’s asking for trouble.

The GOP should understand by now that McCarthy’s opponents won’t hesitate to harm their fellow Republicans if they think it’s to their advantage. It’s easy to imagine most Republicans regretting letting McCarthy agree to this kind of deal.

There is a fair criticism that Rep. Nancy Pelosi and other recent speakers have been too powerful within the House and that restoring some of the balance to subject-matter committees would be good for the chamber. McCarthy’s opponents claimed that what they are doing is decentralizing the House and restoring influence to individual members.

But what’s actually happening is that the new House will be as centralized as before; the only difference will be that instead of the speaker and party leadership running things, it will be the speaker and one small, hostile group. The speaker, at least, is responsible to the entire majority party. The three radical members on the rules committee will only be responsible to themselves and their allies.

As much as the bulk of Republicans wanted to stand behind McCarthy, they should have let him know that these concessions would exact too high a price on the party as a whole.

Jonathan Bernstein is a Bloomberg Opinion columnist covering politics and policy. A former professor of political science at the University of Texas at San Antonio and DePauw University, he wrote A Plain Blog About Politics.