The red-hot labor market is cooling. Monthly U.S. job growth has slowed to around 270,000 from more than 500,000 at the start of the year. Employers are staffing up, returning average work weeks to pre-pandemic levels. Labor-market churn has subsided, with the rate at which workers are quitting their jobs falling back to early 2021 levels. Hiring rates have fallen, too.

And yet despite all this, the fortunes of U.S. workers have arguably improved more over the past few months than they have all year. Gradual normalization from pandemic and supply-chain disruptions are benefiting both employers and workers. Think of it as a one-off productivity dividend as the economy becomes more efficient. This time last year we saw strong nominal growth while inflation-adjusted growth was poor; now things are moving in the opposite direction.

To get a picture of this, look at real average weekly earnings, which take into account both the nominal level of wage growth as well as inflation. There was a boom when the pandemic first hit due in part to composition issues with the index: Lots of the jobs lost during the pandemic were low-paying, such as in retail and hospitality. So those who remained employed had higher average wages than in the pre-pandemic universe. As those lower-paid workers got rehired, the average fell back.

The more important real-earnings story in 2022 has been about the relationship between inflation and wage growth rather than the composition of job growth. In the first half of the year, headline inflation as measured by the Consumer Price Index rose by 5.4%, or 11.1% at an annualized rate. Even though job growth was robust — good news for people who were unemployed or re-entering the workforce — wage growth couldn’t keep pace with that level of inflation, so the typical worker was falling behind. This explains some of the “vibecession” sentiments that people were feeling as gasoline prices were surging to $5 a gallon.

The labor market has slowed since then, but headline inflation has slowed even more. CPI increased by just 1% over the past five months, or 2.4% annualized, as supply-chain normalization led to falling prices for goods such as used vehicles, and gasoline prices dropped significantly. The rental market is also rapidly cooling, which isn’t yet reflected in the CPI data.

So now we’re in a period where Wall Street points to the slowing labor market as evidence of elevated recession risks heading into 2023. Meanwhile real earnings are growing nicely once again, with consumption accelerating as well, which is why the Atlanta Fed’s tracker suggests that real gross domestic product growth this quarter could exceed 3%.

We normally think about real economic growth as a function of employment growth and productivity growth. What we’re now experiencing — supply chains healing, companies’ labor needs easing and workers reaping the benefits of lower prices with a boost to their inflation-adjusted wages — could be called productivity growth.

But better to think of it as a one-time efficiency dividend accruing to companies, workers and consumers alike as many of the disruptions and price spikes of the past 2½ years fade away. Gasoline prices are lower, used vehicles are more widely available, the bruising pace of rent increases is easing, freight costs have plunged, shipping times have shortened and store shelves are generally well-stocked. Financial markets are responding to a couple months of softer inflation data by bidding up both stocks and bonds, which should help the housing market on the margin. This is good news for just about everyone (not so great if you’re a used-vehicle dealer, shipping magnate or landlord).

And there is still room for improvement. Rents are likely to continue falling during the seasonally slower winter months, and auto production should accelerate, boosting economic growth and putting further downward pressure on vehicle pricing and inflation.

With wages once again growing faster than inflation, Americans can either increase their savings rate, which has been somewhat low in recent months, or boost spending even more, which should keep recession fears at bay a while longer.

But the key point is that while nominal levels of growth might be slowing, inflation-adjusted growth is rising as the economy slowly gets back to normal from the many disruptions that wreaked havoc during the pandemic. So even though the labor market is softer, worker fortunes are looking brighter. 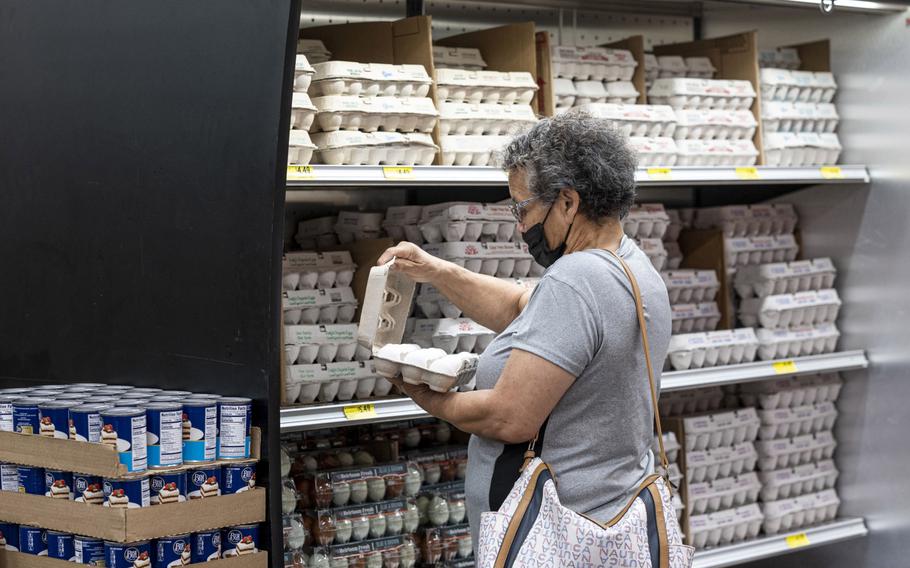 A shopper checks a carton of eggs inside a grocery store in San Francisco, Calif., on May 2, 2022. Easing inflation and mended supply chains are translating into more buying power for Americans despite a softer labor market. (David Paul Morris/Bloomberg)