Here’s how to even out the ‘burden-sharing’ for Ukraine 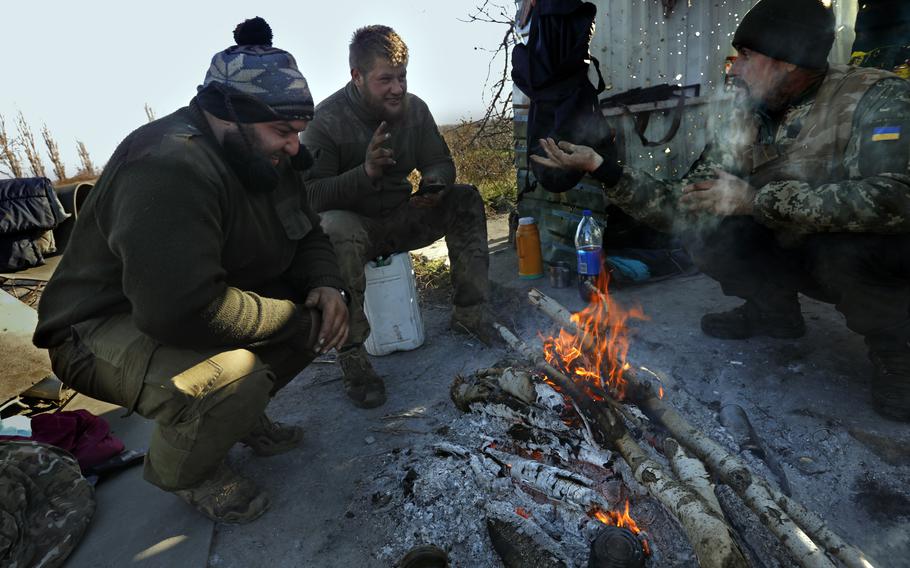 Members of a Ukrainian army tank platoon get warm by a fire beside a bus stop riddled with bullet holes. (Carolyn Cole, Los Angeles Times/TNS)

(Tribune News Service) — Vladimir Putin must be, to say the least, disappointed — and not merely because, nine months on, Russia remains mired in a war against Ukraine that he had expected to win rapidly. Contrary to his hopes, divergent national interests haven’t split the 30-country trans-Atlantic alliance that has been supporting Kyiv. NATO, large and unwieldy, sometimes quarrelsome, has remained remarkably united.

The North Atlantic Treaty Organization imposed the toughest sanctions ever on Russia, rushed critically important weaponry to Ukraine and supported a Ukrainian economy severely strained by the war.

Yet as the war drags on, tensions could arise in its ranks — there are signs already — over “burden-sharing.”

This term is typically used in discussions about relative defense spending within NATO, mainly by Americans who want Europeans to spend more. But eventually the Ukraine war could create discord over a different kind of burden-sharing: comparative contributions to assisting Ukraine.

Military support to Ukraine, even considering the important role some NATO countries — notably the United Kingdom, which has provided $1.5 billion worth — have played has been essentially an American operation. About 80% of the weaponry — in dollar value — received by Kyiv since Feb. 24 has come from the United States, which has committed more than $19 billion in military assistance.

This reflects the size of Washington’s military resources. President Joe Biden’s defense budget request for the 2023 fiscal year totals $813 billion, a sum Congress is expected to add to. That’s more than the next 11 countries combined spent on defense last year.

But when it comes to economic assistance, the United States’ allies possess the means to provide Ukraine far more help than they have.

According to the World Bank, in 2021, measured in purchasing power parity, the gross domestic product of the United States was $20.9 trillion, the European Union’s $19.7 trillion. Throw in the U.K. ($3.1 trillion) and the slim U.S. lead vanishes. Yet the Kiel Institute for the World Economy’s Ukraine Support Tracker shows a large gulf between the budgetary aid the United States has provided Ukraine compared with the EU’s contribution. As of Oct. 3, the U.S. had disbursed $8.5 billion, the EU $3.6 billion (of the $12.3 billion it committed), and the U.K. delivered $0.6 billion, half of its commitment.

The U.S.-Europe aid gap is unwarranted for two reasons. First, the combined GDP of the EU and the U.K. exceeds that of the United States; so unlike on the military-support front, lack of capacity is not the problem. Second, because the United States provides the lion’s share of military assistance to Ukraine, it’s reasonable to expect that the EU and the U.K. together should equal, if not surpass, it in economic aid.

When asked about the imbalance, EU officials claim that the $3.6 billion figure in the union’s Ukraine aid omits contributions by individual member states and includes only money from the EU’s budget. But even if one adds those other contributions to the mix, the picture doesn’t change much, not least because only three of Washington’s NATO allies — Britain, Canada and Germany — have provided more than $1 billion individually, never mind that Germany, Europe’s powerhouse, had a $4.2 trillion GDP last year.

The lopsidedness persists even when the metric used is all forms of economic aid provided to Ukraine as a percentage of a donor’s GDP. According to the Kiel database, only 7 out of the 30 countries assisting Ukraine surpass the United States’ 0.2% proportion.

No matter how one slices it, then, burden-sharing on economic aid to Ukraine isn’t equitable or justifiable.

The point is not that the United States’ allies are deadbeats — they are not — or that economic aid to Ukraine should be mostly Europe’s responsibility; the U.S. can afford to help and should.

Still, if the war proves to be protracted, the present pattern in aid contributions may become increasingly unpalatable in Washington, especially if the United States faces an economic downturn.

Then there’s the magnitude of Ukraine’s needs. Prime Minister Denys Shmyhal estimates that his country will need $38 billion in budgetary aid alone in 2023, and President Volodymyr Zelenskyy reckons it will require $17 billion more for other nonmilitary needs.

Trans-Atlantic disputes on aid to Ukraine could emerge at a delicate moment. The EU and the U.K. now face economic problems that will get worse before they get better and will therefore be hard-pressed to remove the imbalance in nonmilitary assistance to Ukraine. Yet the longer the war continues, the more likely it is that the United States will press for equitable burden-sharing.

Left to fester, the inequity in burden-sharing could create rancor. It should be fixed before things reach that point. The best way forward is a division of labor: The U.S. takes primary responsibility for military assistance to Ukraine; Europe and the U.K. do the same for economic aid.

Rajan Menon is director of the grand strategy program at Defense Priorities, and a senior research scholar at the Saltzman Institute of War and Peace Studies at Columbia University.