Can DeSantis ride the culture war to the White House? 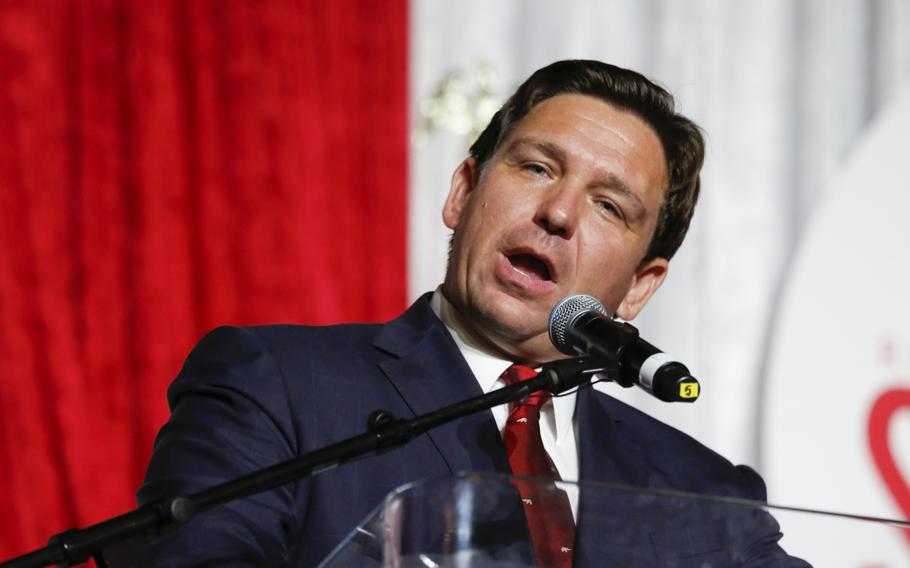 If you’ve been yearning for a preview of the battle for the 2024 Republican presidential nomination, the place to be last weekend was Las Vegas, where the Republican Jewish Coalition held what some attendees cheekily called a “kosher cattle call” for potential candidates.

The biggest buzz of the weekend, though, was attached to Florida Gov. Ron DeSantis, the rising 44-year-old star of the conservative firmament, fresh from a landslide reelection.

Around the country, DeSantis noted, many Republicans fell short in this year’s midterm elections. Florida, he said, offered “a blueprint for success.” DeSantis isn’t running for president yet, at least not officially. He has told supporters to “chill out” until Florida’s legislative session ends in May. But the presence of so many non-candidates at a Las Vegas cattle call showed that the contest is already underway; that Trump, the only declared candidate, isn’t getting much deference from the party he once led; and that, at least for the moment, DeSantis appears to be the challenger most likely to take down the former president.

Polls don’t mean much at this early stage. At this point ahead of the 2016 GOP race, the top contenders in polls were former Massachusetts Gov. Mitt Romney and former Florida Gov. Jeb Bush.

What the polls can say, however, is that most Republican voters have focused on three names: Trump, DeSantis and Pence. Six months ago, most of them didn’t know who DeSantis was.

“It’s too early to call anyone a front-runner,” said Alex Conant, a strategist for Sen. Marco Rubio, R-Fla., in the 2016 campaign. “But you’d rather be Ron DeSantis than anyone else in the field. He’s made as good a first impression on Republican voters as anyone in decades.”

DeSantis has several things going for him, including the adulation of Fox News, which treats him as a front-runner and has begun casting Trump as yesterday’s man.

DeSantis has used that attention to build a national following as a conservative champion in a multifront culture war on not only traditional GOP issues such as abortion and immigration but newer targets such as antiracism education in public schools (pilloried by DeSantis and others as “critical race theory”), transgender surgery for minors (DeSantis wants to outlaw it) and a crusade against what he calls “woke banks.”

The governor has proposed legislation to prohibit banks from discriminating against customers for their religious, political or social beliefs. (Conservative activists are convinced that banks run by liberals won’t lend to right-wing organizations.)

His unifying theme is opposition to what he sees as a liberal power elite: not only Democratic politicians but “globalist” big businesses, big tech and “leftist media.”

“We are not afraid to buck the discredited ruling class,” he said in a recent speech. “This is an agenda that is trying to render the conservative half of the country second-class citizens.”

This is Trumpism 2.0: a pugnacious, populist conservatism rooted in resentment but updated, more disciplined and free of the self-absorption of Trump’s version.

Whether that’s enough to carry DeSantis to the nomination remains to be seen.

And being a front-runner may not be as cushy as it seems. Other candidates are more likely to see you as a target, since you block their way to the top.

“There’s a danger of cannibalism,” Conant said. “In 2016, a lot of other candidates went after Rubio from Day One. Will they start going after DeSantis this time?”

Unlike 2016, in the coming round of Republican primaries no one is likely to underestimate the former president or be surprised by his bulldozer tactics. With their party’s future in their hands, would-be nominees will face a choice.

They can repeat the pattern of 2016, when Trump’s rivals avoided attacking him and savaged one another instead. Or they can take a page from the Democrats of 2020, who coalesced around Joe Biden once it became clear that their race was headed for a showdown between him and Vermont Sen. Bernie Sanders.

Biden, who had nearly been counted out of the race a month earlier, is in the White House today. That’s a lesson Republican contenders may want to heed.