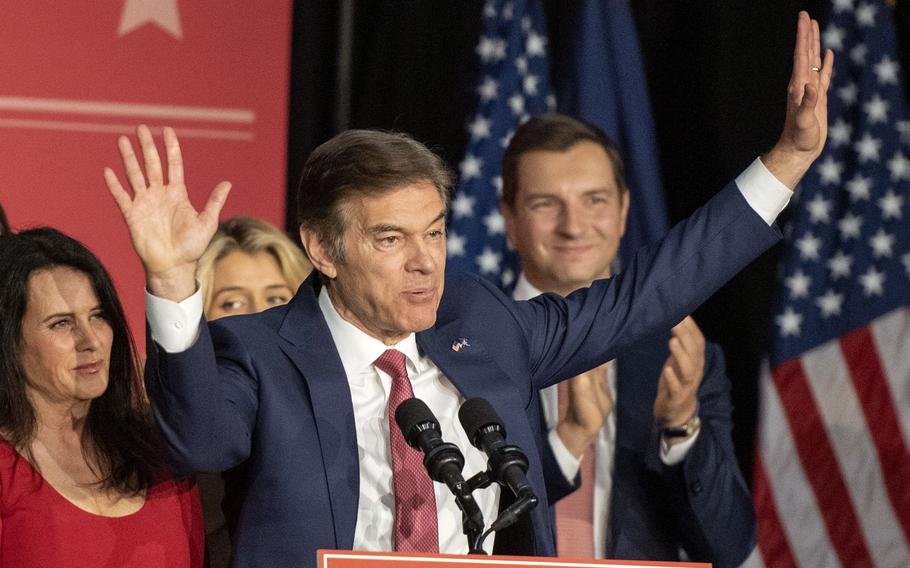 Mehmet Oz and his wife, Lisa, at his election watch party on November 8, 2022, at the Newtown Athletic Club in Bucks County. (Tom Gralish, The Philadelphia Inquirer/TNS)

Is it Dr. Mehmet Oz’s fault that the “red wave” expected by many Republicans didn’t materialize on Election Day? Did the Pennsylvania Senate candidate violate the physician’s Hippocratic Oath — “first, do no harm” — by inflicting severe damage to his own party’s electoral fortunes?

You might think so, given the tenor of many post-election analyses. One of the main story lines of this year’s campaign has depicted a dramatic tension between a fundamentally favorable national climate for the Republican Party on one hand, and on the other, a weak slate of individual nominees foisted on GOP leaders by misguided primary voters.

Oz, who was easy to view as a celebrity dilettante suddenly parachuting into politics — and the state of Pennsylvania — from elsewhere, became perhaps the most frequently cited example of Republicans’ candidate recruitment problems. But fellow Senate nominees Herschel Walker, of Georgia; Blake Masters, of Arizona; and Don Bolduc, of New Hampshire, as well as gubernatorial candidates like Doug Mastriano in Pennsylvania and Tudor Dixon in Michigan, struck political analysts as flawed standard-bearers for the Republican Party.

While candidate shortcomings do appear to have affected the final results in several key races, Republicans’ disappointing performance up and down the ballot can’t be fully explained by the flaws of a few specific candidates. Instead, Republicans suffered from a blemished national image that hurt the party’s nominees regardless of their political competence.

By historical standards, the most surprising outcome of the 2022 elections was the unusually modest partisan swing in the House of Representatives. Elections for Senate and governor have traditionally been less predictable, but the president’s partisan allies nearly always lose House seats — sometimes dozens — in the midterms. Since World War II, the movement toward the opposition party has averaged 26 seats and 7 points in the national popular vote. When the president’s approval rating is below 50%, the expected shift is even greater.

While votes are still being counted, it’s clear that House Democrats experienced a small fraction of the 40-seat loss that Republicans suffered in 2018, even though President Joe Biden, whose job approval rating is hovering around 41%, is slightly less popular today than Donald Trump (42%) was at the same point in his presidency.

Yet this asymmetry can’t be fully explained by pointing to a poor set of Republican House candidates. A few of this year’s nominees were controversial or scandal-ridden, but many others were thoroughly typical and unobjectionable politicians who nonetheless struggled to capture battleground districts.

Republicans also failed to establish a consistent advantage on what’s known as the generic ballot, a standard polling question that asks voters simply if they plan to vote Democratic or Republican, or which party they prefer to control Congress, without mentioning candidate names. If there were a significant number of Americans who were generally inclined to support the Republicans but who balked when confronted with a specific unappealing candidate, we presumably would have observed a bigger advantage for the GOP on the generic ballot than in the actual voting results.

Instead, the final pre-election polls found a nationwide Republican advantage of 1 percentage point on the generic ballot while the national House popular vote is likely to favor Republicans by a slightly larger margin.

Republicans’ inability to translate an unpopular Democratic president and unsettled economic climate into a clear electoral advantage suggests that the party was burdened by a tarnished national reputation.

Voters who expressed dissatisfaction with the condition of the nation under Democratic rule didn’t necessarily believe that Republicans offered better solutions to their problems. It’s very possible that the GOP’s current emphasis on cultural populism left it with less credibility to address Americans’ economic concerns. And the unpopular Supreme Court decision overturning Roe v. Wade not only energized an angry Democratic base but also worried moderate voters that Republicans would impose strict abortion bans if entrusted with power at the federal and state level.

Yes, Dr. Oz and his fellow untested neophytes weren’t much help to their party this year. But it’s easy to pin the unhappy outcome on individual scapegoats. Instead, they should be examining the deeper set of challenges that prevented the GOP from enjoying the out-party’s usual midterm rebound.

Still, no disappointment is permanent in our highly competitive era. Both the country and the government remain closely divided — and the next campaign season is about to begin.

David A. Hopkins is an associate professor of political science at Boston College and the author of “Red Fighting Blue: How Geography and Electoral Rules Polarize American Politics.”