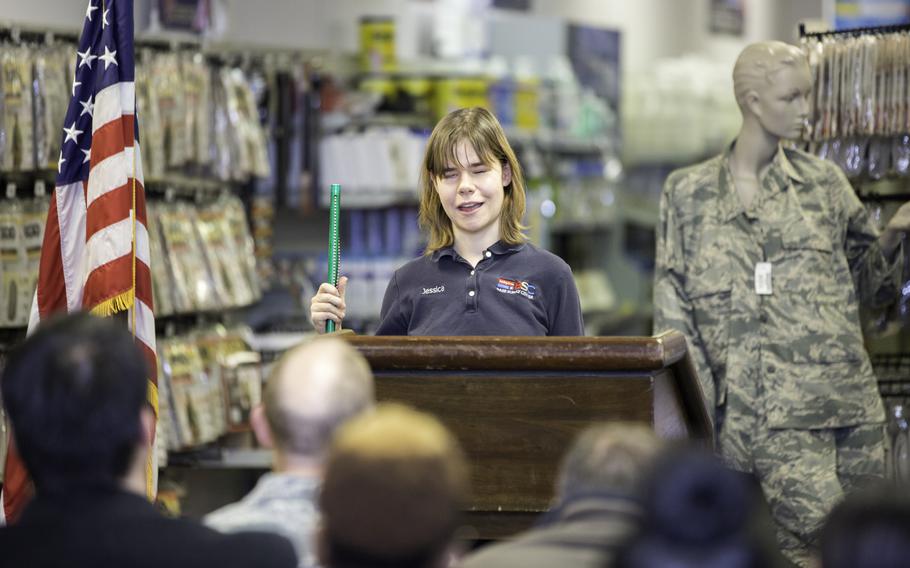 Jessica Brasseal, a graduate of Blind Industries and Services of Maryland’s (BISM) Ability One training and rehabilitation programs for the blind and an employee of BISM’s Base Supply Center on Joint Base Anacostia-Bolling (JBAB), speaks to an assembly of the store’s customers during a ceremony recognizing BISM’s 20-year relationship with the base. (Jim Remington/U.S. Navy)

Veterans Day is a time for us to honor those who have served our country. Appropriately enough, the official theme of this year’s celebration is “Honor,” which reflects the military tradition of answering the call to duty.

It’s a call that I answered myself, serving 15 years in the Navy that included two tours of flying SH-60B helicopters out of San Diego. I also had the honor of serving in many capacities at the Pentagon, including roles in the Joint Staff, personal aide to the secretary of the Navy, and social aide to the White House. These opportunities provided insight into the highest levels of military policymaking and the opportunity to develop valuable skills I used throughout my career. The Navy allowed me to earn a master’s degree at Harvard and I enjoyed every minute of my naval career. The mission and the people could not be any nobler, and the opportunity to lead sailors was a humbling responsibility. I would still be in uniform today but my career ended when I lost vision in one eye and protocol forced me to step down and retire from flying off pitching flight decks.

Being a member of our armed forces was certainly a distinct honor for me. When my service ended sooner than expected due to declining vision, I wondered what I would do after leaving the Navy. I was fortunate enough to hold leadership positions with CapitalOne Financial Services and the Virginia Department of Wildlife Resources, which led me to my current career at Virginia Industries for the Blind (VIB), one of National Industries for the Blind’s (NIB) associated nonprofit agencies. VIB gives me the opportunity to continue working with veterans and supporting those who have faithfully served our country by providing employment and advocating for meaningful career opportunities for all veterans, including those who are blind or visually impaired.

As we honor our veterans today, I would also like to recognize all the employees who are blind or visually impaired and the essential role they play in supporting our nation’s armed forces. In total, NIB (and its associated nonprofit agencies) employs more than 500 veterans among its network of employees who work to support our military. VIB employs 17 veterans, who make up 11% of our workforce, in many leadership positions.

NIB’s core mission is to create and sustain employment opportunities for people who are blind, including those who are veterans. For more than 80 years, this organization has helped employ veterans in a range of careers at both NIB and its associated nonprofit agencies through the federal government’s AbilityOne Program. This program serves as one of the largest sources of employment in the U.S. for veterans and veterans who are blind. Together, with associated agencies like VIB, NIB is also able to go beyond employment opportunities and provide a range of training, rehabilitation and other services to veterans and their families that help them with job placement and counseling as they transition from active duty to civilian life.

Across the country, employees at NIB agencies supply the military with crucial products to fulfill their mission of protecting our country. For instance, some of these employees support veterans through their work on contracts with the Department of Veterans Affairs, while others provide critical services in VA call centers to provide veterans with assistance around the clock. VIB operated a seven-person (including five employees who are blind) switchboard at the Veterans Hospital in Salem, Va., for decades. Others support the military by manufacturing belts, helmet bands and covers, hydration systems, and barrack bags. VIB proudly manufactures one-third of the Navy’s shipboard mattresses in one of our two production facilities – the same mattresses I slept on during three deployments to the Middle East.

At VIB, we recognize the vital role that veterans and veterans who are blind play in today’s workforce, and how their dedication to serving our country can continue following active duty. Our employees also operate 11 Base Supply Centers on military bases and in federal government buildings throughout Virginia. Each BSC provides a full range of products tailored to the needs and requirements of the Department of Defense, ranging from office supplies to cleaning supplies, work tools, and military uniform items. Given VIB’s location, we support some critical missions at workplaces like the Pentagon and Fort Belvoir, which is home to 10 Army commands, the Virginia National Guard, and many other subagencies of the DOD.

Through my work at VIB and with NIB, I’ve been honored to work closely with our nation’s veterans as we continue to advocate for increasing meaningful employment opportunities. I strongly encourage other employers outside the government sector to look to our veterans for open employment positions and help support their efforts in creating meaningful careers. Employing our veterans is just one way to truly honor the service and sacrifices that veterans have made for our country.