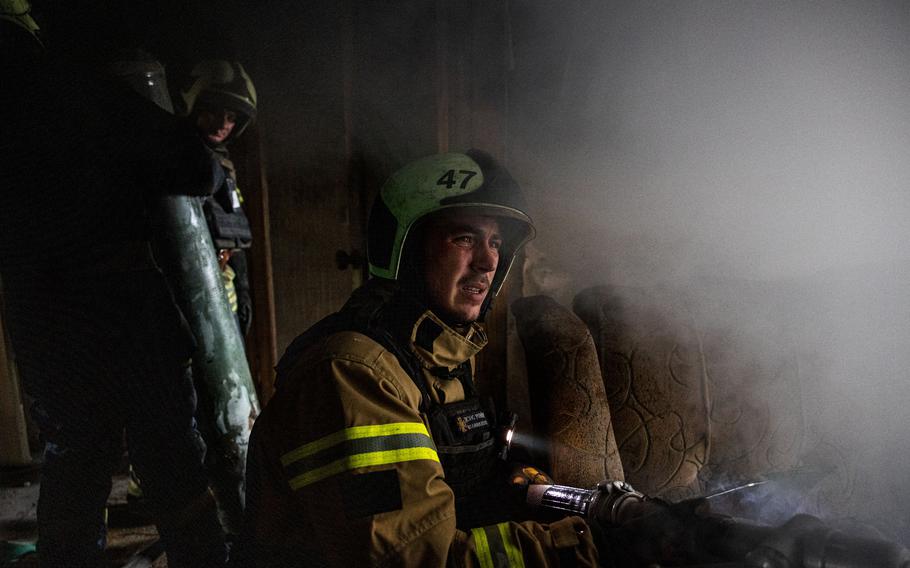 Ukraine firefighters put out a fire in a residential building following a shelling on the frontline town of Bakhmut, in eastern Ukraine’s Donetsk region, on Oct. 29, 2022, amid Russia’s military invasion. (Dimitar Dilkoff, AFP via Getty Images/TNS)

The U.S. and its allies have been engaging in a significant military intervention to help Ukraine resist Russia’s brutal invasion for the past nine months. Not only have they given considerable financial, humanitarian and military resources — including sophisticated weapons systems — to Ukraine, but they also have embedded advisers with Ukrainian forces, allowed thousands of their citizens to join Ukraine as foreign fighters and provided a vast amount of real-time intelligence to the country.

While this intervention has enjoyed broad domestic support, it has its share of determined critics. Notably, much of the anti-war camp in foreign policy circles has loudly opposed vigorous U.S. intervention. Its criticism is simple: The U.S. has done this before. With Afghanistan, Iraq, Libya and Syria, America’s recent interventions have been a parade of mission failures.

In each of these cases, the reasons for failure were similar. As has been highlighted by critics, the U.S. has shown that it is thoroughly capable of using military force to destroy hostile governments, from dislodging the Taliban regime in Afghanistan in 2002 to helping revolutionaries overthrow Moammar Gadhafi in Libya in 2011. But what happens afterward?

These situations have either left America beating a quick retreat and leaving behind a country in ruin, as in Libya, or else undertaking a prolonged and costly occupation to ensure that its chosen proxy faction stays in power, as in Afghanistan. Either way, they have led to absolutely disastrous results for the U.S., the relevant countries and their broader regions.

The anti-war camp’s critique of these actions is right on the money. But what it misses is a remarkably simple point: Not all interventions are created equal. Intervening to back a state defending itself in an interstate war is a different strategic proposition from intervening to support a rebel group or revolution against a regime in a civil conflict. In short, U.S. support for Ukraine is more like support for Kuwait in 1991 or South Korea in the 1950s than Iraq or Afghanistan.

Why is this distinction so crucial? The reasoning here is straightforward as well: When backing a state defending itself against foreign aggression, there is a viable situation in the country once the fighting is over. The U.S. won’t need to engage in a prolonged and costly military occupation to ensure stability in Ukraine. It won’t have to undertake the herculean task of building a new nation. It won’t have to stand up a new military and range of governing institutions. And it won’t have to conquer Ukraine province by province, fighting a bloody insurgency waged by an ousted regime. In a nutshell, someone will be in charge.

In fact, like most defensive interstate conflicts, the fighting has helped substantially strengthen Ukraine. As political scientist Charles Tilly famously said, “War made the state.” He could have added that it makes the nation too. The Ukrainian state and army have been forced to become far more efficient and capable to meet the tremendous threat facing them, and the Ukrainian people have rallied strongly in defense of their beleaguered nation. The war has congealed Ukrainian society and crystallized the Ukrainian state. Like other states to come out intact from modern defensive wars such as Iran, Israel or Turkey, Ukraine will emerge from this stronger, more cohesive and more prosperous than it was before. This makes concerns about postwar anarchy or quagmire a particularly foolish misreading of the lessons of history and the current situation in Ukraine.

Others will debate the value of the U.S. interests at stake in Ukraine, which include some combination of preserving democracy, upholding territorial sovereignty, restoring the power of deterrence and reassuring frightened allies. And while most analysts agree that the risk of Russia using nuclear weapons in Ukraine is low, it is not something that can be entirely dismissed out of hand. But it is worth stressing that what is perhaps the primary critique of U.S. interventionism over the last 20 years simply doesn’t apply here.

Those invoking the specter of America’s post-9/11 decade are misunderstanding the situation at hand and the important distinction between involvement in an interstate versus a civil war. The U.S. is not invading a country and installing a new regime — that is what Russia is trying, and failing, to do. Instead, it is helping one country defend itself from aggression by another.

Not all interventions are the same — and this is Kuwait or South Korea, not Libya or Afghanistan.

Daniel Silverman is an assistant professor of political science at Carnegie Mellon University. Kyle Larson is a senior research associate at the Chicago Project on Security and Threats at the University of Chicago.