Bipartisanship on Ukraine was nice while it lasted 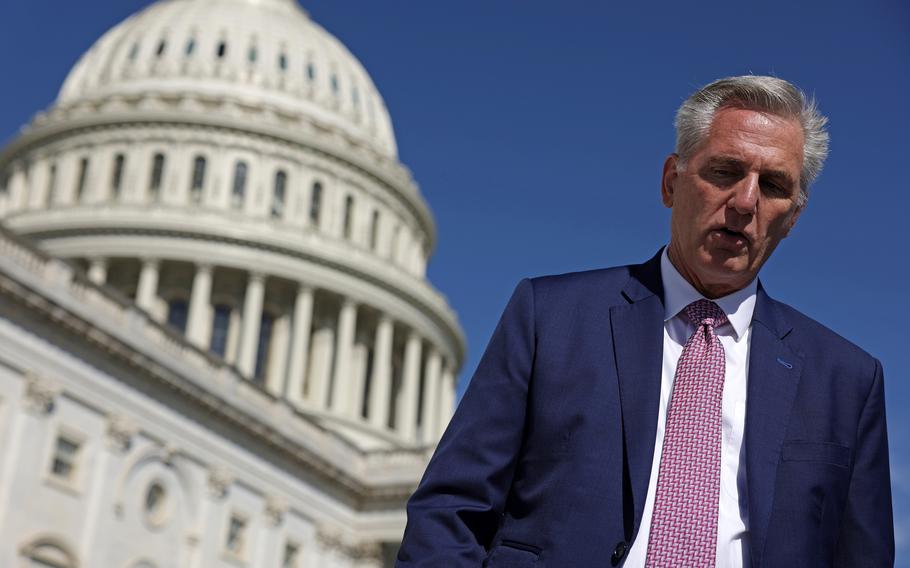 House Minority Leader Rep. Kevin McCarthy at the Capitol on Sept. 29, 2022, in Washington, D.C. McCarthy said recently that if his party takes control of the House of Representatives, Congress will become more skeptical about helping Ukraine. (Alex Wong, Getty Images/TNS)

Over the eight months since Russia invaded Ukraine, public support for U.S. military aid to Kyiv has been remarkably solid and mostly bipartisan.

A large majority of Americans (73% in a Reuters/Ipsos survey in October) favor continued help for Ukraine, and Congress, with support from both parties, has approved more than $65 billion in aid.

But cracks in the consensus have begun to appear, and the divided government that’s likely after the midterm elections will almost surely worsen them.

A growing faction of Republicans, notably including former President Donald Trump, already have called for a reduction or outright cutoff in aid.

House Republican leader Kevin McCarthy said recently that if his party takes control of the House of Representatives, Congress will become more skeptical about helping Ukraine.

Some Democrats, too, have expressed qualms about the length of the war. Last week, 30 members of the House Progressive Caucus issued a letter urging President Joe Biden to step up diplomatic efforts to end the war — only to withdraw it in embarrassment after several signers objected to the tone and timing.

The two episodes differed in important respects. McCarthy may be speaker of the House by January; his views could determine whether aid to Ukraine can get through Congress at all. The progressive Democrats represent a smaller faction in their party — and did their cause no good by issuing and withdrawing a letter that seemed to criticize their own president.

But both incidents must have pleased Russian President Vladimir Putin, who has worked diligently to weaken Ukraine’s support in the United States and other Western countries.

That’s not to suggest that any American hoped for that result — except perhaps Trump, who has long expressed open admiration for the Russian autocrat.

But aid from the United States and its allies has been key to Ukraine’s ability to repel Russia’s much larger armed forces. If Western countries grow weary, Putin would gain a victory as great as any he has won on the battlefield.

The Republican divide over support for Ukraine should not have surprised anyone. Trump and his most fervent supporters have long opposed U.S. aid to almost any foreign country.

In May, 57 House Republicans and 11 GOP senators voted against an administration request for $40 billion in aid. Since then, Republican skepticism has only grown.

McCarthy joined the cause this month, perhaps in response to pressure from his right as he seeks support for his election as speaker.

“I think people are going to be sitting in a recession, and they’re not going to write a blank check to Ukraine,” McCarthy said, forecasting next year’s Congress. “They just won’t do it.”

The pro-Trump wing is weaker in the Senate, where the Republican leader, Sen. Mitch McConnell, of Kentucky, has praised Biden’s approach and lamented the resurgence of what he calls “our isolationist wing.”

The progressive Democrats’ train wreck was more complicated. They drafted their letter over the summer, when Putin’s threats of nuclear war were at a peak; some signers said they merely intended to encourage Biden to defuse the threat of direct U.S.-Russia conflict.

But the timing of the letter’s release was spectacularly ham-handed. It made the progressives sound as if they were in league with McCarthy and the Trumpists, as caucus chair Rep. Pramila Jayapal, D-Wash., admitted.

And at a time when Ukraine’s army has been gaining ground, it made them appear to want to stop Kyiv’s offensive in its tracks.

“In diplomacy, timing is everything,” said Rep. Sara Jacobs, D-Calif., one of the signers who withdrew her support.

Rep. Ro Khanna, D-Calif., defended the letter, calling it “common sense.” But he added — as the letter did not quite make clear — that he also supports the continued supply of U.S. weapons to Ukraine.

Khanna was right on at least one level: Diplomacy to head off a wider war and promote negotiations qualifies as common sense.

But any diplomatic solution must be “acceptable to the people of Ukraine,” as the progressives’ letter acknowledged. At this point, most Ukrainians want to push Russian troops off their territory before they try to negotiate.

There’s nothing wrong with debating how much aid the United States should provide to Ukraine or what kind of diplomatic solution it should seek. At this point, though, neither Ukraine nor Russia is ready to make a deal. Until they are, the main question is how far Ukraine can take the fight — and that will depend, in great part, on how long its Western backers maintain their support.

Over the coming months, as the cumulative cost of the war grows and a presidential campaign begins, division over Ukraine in the United States will almost surely widen — especially if Trump jumps in as a candidate. The arguments of the last few weeks have been a not-very-polished preview of a larger debate. The wonder is that they took so long to break out.