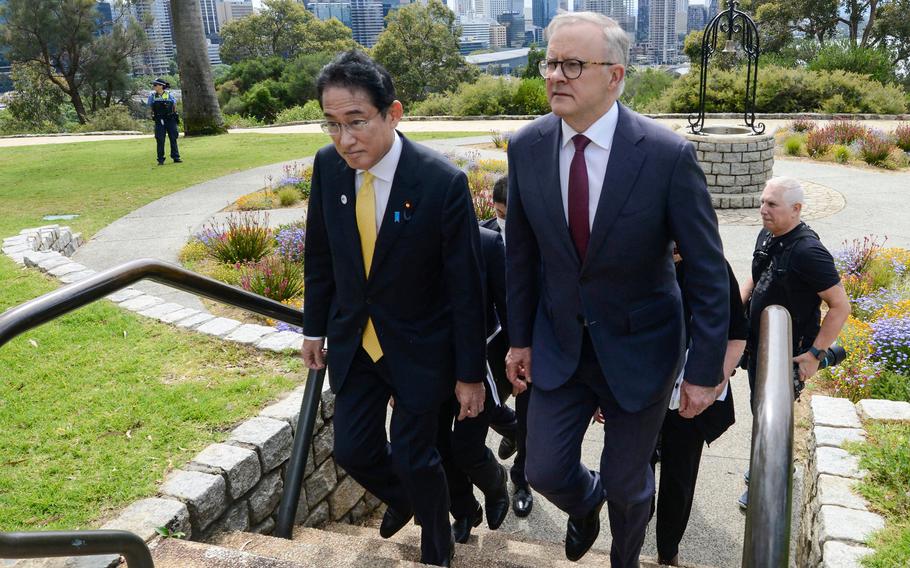 As Xi Jinping edges out his rivals in the Chinese Communist Party, shakes up his leadership team and begins an unprecedented third term as China’s leader, Beijing’s military modernization continues apace. In a span of two decades, China has transformed itself from a relatively minor player on the world stage into a formidable geopolitical force that is willing and able to pursue its interests aggressively. Xi’s objective, as stated in numerous documents and communiques, is none other than to turn the People’s Liberation Army, or PLA, into a world-class military by 2049.

China’s neighbors and competitors, however, aren’t sitting still as the PLA builds up the world’s largest arsenal of ballistic missiles and fields a growing armada of cruisers, ships and fighter aircraft. Japan and Australia, two countries that have their own grievances with Beijing, are also strengthening their own militaries, increasing their defense budgets and teaming up to create a balancing coalition against China.

Last week, Japanese Prime Minister Fumio Kishida and Australian Prime Minister Anthony Albanese signed an agreement that will broaden the strategic relationship between Tokyo and Canberra on everything from defense and energy to the economy and the climate. This was the fourth time Kishida and Albanese have met since the latter took office in May, and the latest cooperation accord comes less than a year after Japan and Australia agreed to a lengthy “reciprocal access agreement” that set the foundation for regular military exchanges on one another’s territory. While nobody is predicting the formation of a defense alliance between the two Pacific powers, it’s safe to say that the Japanese and Australian governments are sufficiently concerned about China’s enhanced wealth, influence and hard power that both are willing to combine forces to manage it. The old mantra, “There’s strength in numbers,” very much applies.

It’s not a mystery why Japan and Australia feel an imperative to improve their bilateral relations. The three core pillars of a nation’s power — population, wealth and military strength — have been noticeably kind to the Chinese since the dawn of the 21st century. China’s gross domestic product has increased by 1,365% since 2000, surpassing that of the European Union. Hundreds of millions of people in China have been lifted out of poverty as a result, decreasing the strain on the state and adding more productivity to the labor force. China is now a significant trading partner for many; in Latin America, widely considered to be in the U.S. sphere of influence, trade has ballooned to nearly $449 billion last year from $18 billion in 2002.

All of this wealth has allowed China to turn its military from a backward, unsophisticated force into one that rivals Washington in Asia. While the United States still outspends China on defense by a ratio of more than 2½ to 1 — in fact, the U.S. spends more on defense than the next nine nations combined — the trend line for Beijing has been exponential. According to the World Bank, China’s military expenditures have risen more than 1,000% since the beginning of the century. More dollars mean more capacity, with the PLA earmarking a large chunk of the money toward researching and developing the next generation of weapons, from anti-submarine warfare aircraft to cruise missile modifications.

None of this is to suggest China is capable of establishing hegemony in the Asia-Pacific or is intent on steamrolling its neighbors. For one, the PLA hasn’t fought a major conventional war in decades. While Xi’s rhetoric can be ominous at times, he’s also relatively cautious and appears to understand the limits of Chinese power.

China’s assertiveness, however, does help explain why countries such as Japan and Australia feel the need to collaborate more frequently. As University of Notre Dame professor Michael Desch wrote for Defense Priorities in July, “As China grows more powerful and assertive, states closest to it are feeling a greater sense of peril.” Rather than accede to China’s wishes in the hopes Xi will show some mercy, Tokyo and Canberra (and New Delhi, for that matter) are instead balancing against Chinese power by boosting their own military capability and pooling resources.

This summer, Japan’s Defense Ministry released its highest budget request in history, asking for $43 billion to fund a litany of items, including standoff weapons that would permit Tokyo to strike at bases in places such as China and North Korea. If Kishida and his party have their way, Japan will devote nearly $280 billion over the next five years toward defense, a big deal for a country whose pacifist leanings are embedded in the constitution. Australia, too, is planning to throw more money into defense projects; its budget for 2022-23 is more than 7% higher than the previous year’s — and the Australians are projected to increase it by another 6% in 2023. If there is anything Australia’s major political parties agree on, it’s the utility of improving the country’s ability to defend itself.

It’s easy to get carried away with all of these numbers. But the bottom line is clear: Faced with a more bellicose China, the smaller nations that operate in the same region have no intention of submitting. If anything, the stronger the PLA becomes, the more committed its competitors will be to not only take responsibility for their own security but also to unite in pursuit of a stable modus vivendi.

Daniel DePetris is a fellow at Defense Priorities and a foreign affairs columnist for the Chicago Tribune.