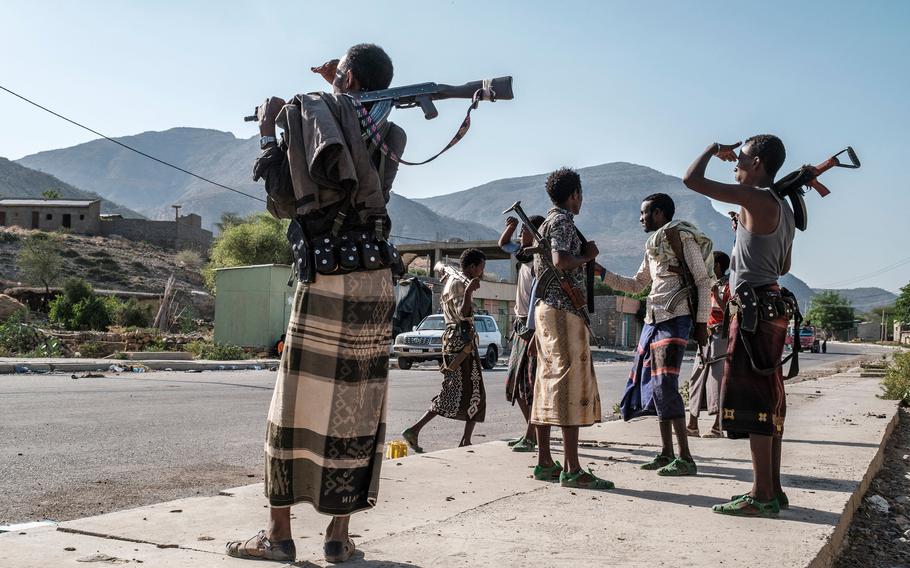 Members of the Afar militia stand in a checkpoint at the entrance of the town of Abala, 480 kilometers of Semera, Ethiopia, on June 8, 2022. The Afar region, the only passageway for humanitarian convoys bound for Tigray, is itself facing a serious food crisis, due to the combined effects of the conflict in northern Ethiopia and the drought in the Horn of Africa which have notably caused numerous population displacements. (Eduardo Soteras, AFP, Getty Images/TNS)

While the world’s eyes are trained on the war in Ukraine and whether Vladimir Putin is unhinged enough to use nuclear weapons, another war rages mostly unseen some 3,000 miles away in Ethiopia.

The war is centered on the northern region of Tigray, where a long-standing political conflict between the Ethiopian government and the Tigray People’s Liberation Front (TPLF) turned violent in 2020. The region has been under a near total blockade for most of the time since, cut off from humanitarian aid, electricity, telecommunications and banking, leaving 5.3 million civilians in dire straits. The Ethiopian government’s renewed offensive has escalated the crisis even further.

Accurately estimating the dead while war continues is difficult, but the best estimates available suggest at least half a million people have died so far from direct violence, starvation and lack of access to health care. Starvation seems to be a feature rather than a bug in the government’s battle plan. More recent estimates suggest that this number have died in combat alone, possibly bringing the overall deaths closer to a million.

To put it in perspective, the United Nations estimates about 6,000 civilians have been killed in Ukraine so far, and estimates put military deaths in the tens of thousands. Even if these estimates are low, the best available numbers suggest that the scale of death in Ethiopia exceeds that in Ukraine many times over. And yet Ethiopia has received a small fraction of attention, both from policymakers and the media.

The U.S. and others must take a more direct approach before the worst fears of the Tigrayan people are realized.

Those fears include a genocide of the people of Tigray. In response to the latest offensive, the United Nations, African Union, United States and other countries have called on all sides to cease hostilities. But generic calls for everyone to stop fighting and quiet behind-the-scenes diplomacy that has been the favored approach so far are a woefully inadequate response.

Tigrayan authorities have indicated that they would respect a cease-fire, but Ethiopian government officials have instead doubled down to lambaste the “evils” of its enemy. Meanwhile, the Ethiopian government has reportedly dropped leaflets in Tigray stating that anyone remaining behind would be considered a combatant, raising clear concerns that all Tigrayans, a distinct ethnic group, would be targets in an assault.

Sources from the area claim Ethiopian and Eritrean forces (their allies) have been instructed to kill three Tigrayans each, including elderly and children, and that victims’ limbs and skulls are on display.

These stories are unverified given the lack of humanitarian and media access to the region. But given the language and actions of Ethiopia so far, along with the death toll and atrocities already committed, there is little reason not to take them seriously.

Eritrea’s role has complicated efforts to reach a peace too, as few countries have any leverage to influence its actions, and the TPLF is its sworn enemy. There is no guarantee that Eritrea will stop fighting even if the Ethiopian government comes to the table.

While it’s true that all sides have committed abuses, the scale is hardly comparable, with Ethiopia and Eritrea committing the lion’s share of wanton violence and harm against civilians throughout the conflict. When one side holds this level of responsibility for continuing conflict and suffering, those who hold any sway must speak out clearly and directly against it.

At this stage, peace looks like a long shot, but that does not excuse the inadequate efforts made so far. The United States and the United Nations are often loath to invite criticism by directly calling out states for violent acts against their own people when those states are friends and partners, as Ethiopia is.

It won’t likely end the war, but that is a weak excuse for not trying harder. The innocent people of Tigray deserve acknowledgment, and there is a chance that such international pressure, in combination with policy choices that reduce Ethiopia’s support, through international institutions and individual countries alike, could influence the path Prime Minister Abiy Ahmed chooses. Calling out the atrocities for what they are would at least put Ethiopia and Eritrea on notice that the world is watching, and the long arm of international justice could ultimately prevail. Offenders in Rwanda, the former Yugoslavia and Sierra Leone, to name a few, ultimately faced justice.

We must stop shying away from uncomfortable conversations when so many lives are at stake. If U.S. leverage is inadequate, we should press the countries who arm and support Ethiopia and Eritrea, and the international financial institutions like the World Bank that keep the country afloat as its economy falters.

The time for quiet diplomacy is over. The time for alarm has long since passed. Echoing what we’ve heard repeatedly about the plight of Ukraine: If Ethiopia stops fighting, the war ends, but if Tigray stops fighting, in the absence of international oversight and an inclusive peace process, the impoverished people of Tigray might end instead.

Elizabeth Shackelford is a senior fellow on U.S. foreign policy with the Chicago Council on Global Affairs. She was previously a U.S. diplomat and is the author of “The Dissent Channel: American Diplomacy in a Dishonest Age.”