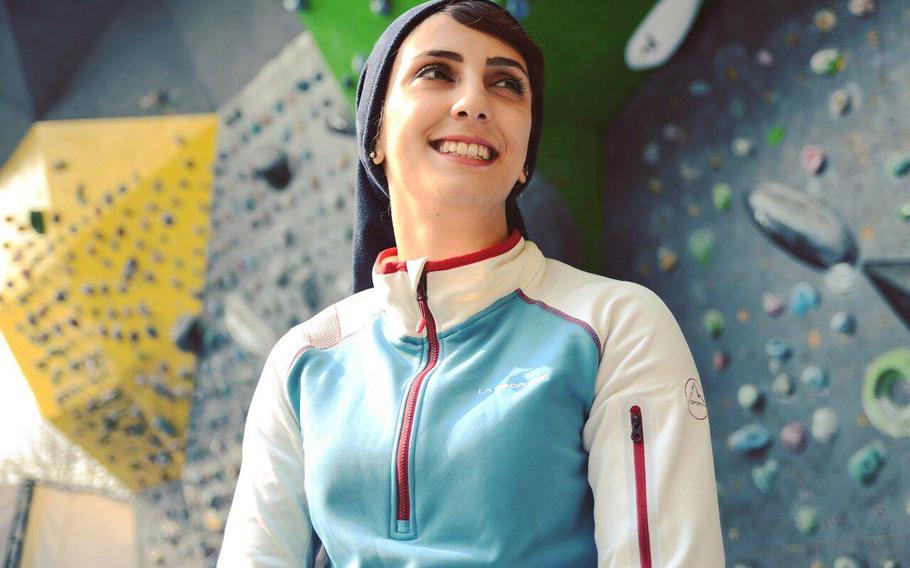 One of the reasons Iran’s anti-government protests have persisted is the emergence of new inspirational figures every few days. The latest is Elnaz Rekabi, a sport climber who defied the Islamic Regime’s strict dress code for women by competing in an international tournament in South Korea last week without wearing a headscarf.

Rekabi vanished from view after her performance and only emerged after apologizing on Instagram for baring her head. Reports suggest her statement was coerced by officials from the Iranian Embassy in Seoul, who then hustled her into a flight back home.

The officials clearly didn’t expect what happened next: Rekabi was greeted at the Tehran airport by crowds chanting, “Elnaz, Hero!” Since the airport was crawling with security forces, whether in uniform or in mufti, the ecstatic reception was itself an act of defiance by the hundreds of Iranians who knowingly risked joining Rekabi in her uncertain fate.

Although the International Olympic Committee has said it received assurances from Iranian officials that Rekabi “will not suffer any consequences,” the regime has been known to wait until the spotlight has moved on before inflicting punishment on those who break its rules. Prominent protesters face a spectrum of oppression, ranging from televised apologies and a period of house arrest to incarceration and torture in one of Iran’s notorious prisons. Some detained protesters have been killed, with officials concocting ever-more absurd cover stories — including, in the case of Nima Shafaqdoost, “infection caused by a dog bite.”

The regime’s repressive measures have not had any dampening effect on the nationwide street demonstrations, which were sparked by the death in custody of a young woman, Mahsa Amini. Rather than be cowed, the crowds appear to be inspired by every new heroine and hero to new heights of dissent — including the destruction of images and statues of Ayatollah Ruhollah Khomeini, the founder of the Islamic Republic, as well as calls for the death of his successor, Ali Khamenei. The rallying cry of “Jin! Jiyam! Azadi!” (Women, Life, Freedom) has grown louder with every week for the past month.

Since this counterrevolution is female-led, most of the inspiration has come from women like Amini and Rekabi, and girls like Nika Shakarami, who was thrown to her death from a high floor after having set fire to her headscarf. The ranks of prominent protesters include the odd man in, like the singer Shervin Hajipour, who turned despondent online lamentations about Amini’s death into lyrics for a song that has become the anthem of the protests. He, too, has endured arrest on charges of “propaganda against the system” and “inciting people to violent acts.”

Perhaps the most important characteristic of these inspirational icons is their youthfulness. Amini was 22 years old; Shakarami and Shafaqdoost, just 16. Hajipour is 25, and Rekabi, 33.

This may be key to the durability of the protests. Holly Dagres, a nonresident senior fellow at the Atlantic Council, has described the demonstrators as representatives of Iran’s Gen Z.

This means they have no direct experience of the two major events on which the Islamic Republic rests its case for legitimacy: Khomeini’s 1979 revolution and the 1980-88 Iran-Iraq war. Being young, they also tend to be less religious than their parents, which weakens the regime’s other claim to authority: Islam. It doesn’t help that the government uses faith to justify rigid social rules, such as the dress code for women, that young people find despicable.

Over four decades since its inception, the Islamic Republic has not been able to add to the stories of sanctity and sacrifice that it has tried to drum into successive generations. It can offer no narratives of good governance and economic opportunity, and the standard excuse that this all the fault of the American “Great Satan” — a phrase coined by Khomeini and still trotted out by Khamenei — has worn thin.

If the regime can’t suppress the protesters with violence, it won’t placate them with hoary slogans and tales of martyrs for the revolutionary cause. Iran’s Gen Z has its own slogans, its own cause, and in the likes of Amini and Rekabi, its own martyrs.

Bobby Ghosh is a Bloomberg Opinion columnist covering foreign affairs. Previously, he was editor in chief at Hindustan Times, managing editor at Quartz and international editor at Time. This column does not necessarily reflect the opinion of the editorial board or Bloomberg LP and its owners.