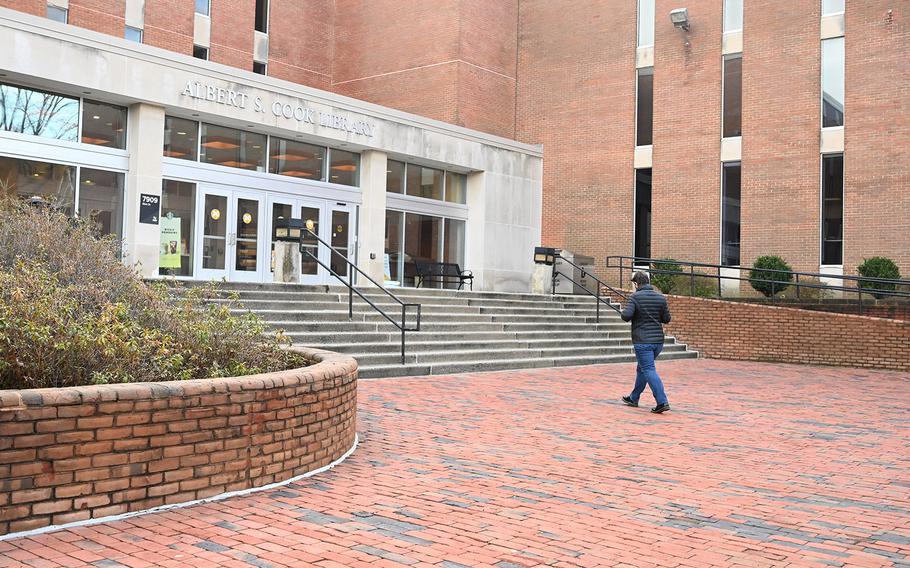 The Cook Library on the campus of Towson University in Maryland on Jan. 27, 2021. (Brian Krista, The Baltimore Sun/TNS)

There’s been a lot of discussion about the dearth of American males attending college, but little, if anything, has been said about another crisis among young males — their struggles to remain buoyant, let alone succeed, once they’re in college.

I’ve witnessed this firsthand. As happened last semester, and semesters before that, many of my male college students, especially Black males, are falling through the cracks. Male students are showing up to in-person — and even Zoom — class meetings less frequently, and they’re struggling to complete assignments.

This jibes with what little research exists: The August 2022 report PDP Insights, sponsored by the National Student Clearinghouse, found that freshmen women in both community college and four-year institutions complete more courses attempted than male peers. It also found that male students of color attempt and earn the equivalent of “one course worth of credits less than their Asian and white and female peers in their first year alone.”

Here are more of the puzzle pieces: Yes, males still predominate in STEM majors, but female classmates outperform them with grades and overall GPA. In fact, the lower grade-point averages boys earn in high school stays with them throughout college. And from at least fourth grade through high school, boys read at a 10 point deficit, minimally, from girls, which hounds them into college, where literacy is a defining factor in success.

Despite how pervasive this problem is, the metrics are barely catching up with this trend. A Senior Research Analyst at a two-year college in Maryland who has observed this falling off among male students told me that “higher-ed folks are just getting around to honestly addressing gender disparities.” He said that this awareness is mostly among analysts like himself.

An uncomfortable truth is that some colleges and universities are not as male-friendly as they would like to believe. Anecdotal evidence abounds of male students feeling disconnected from college classrooms and cultures. Recently, I gave a talk at a two-year college about how males’ academic and mental health struggles, as well as the alienation they feel, are impacting their academic performance. I was met with this: “Men have had the spotlight for far too long,” one self-described gender studies professor boomed to round applause. “Why are we putting it on them yet again?”

It’s a question that needs to be addressed if schools want to not just keep male students enrolled but actually help them. And they need help: Recent research conducted by the American College Health Association found that, among other things, nearly half of male college students surveyed felt that “things were hopeless”; 56% felt “very lonely”; 59% often felt sad; nearly 35% experienced depression that made it difficult to function; and nearly 50% experienced overwhelming anxiety. Forty-three percent of them confessed that academics was the most “traumatic” and “difficult” thing for them to navigate.

A 2017 small-sample study brought to light another problem universities need to address: Males who embrace a traditional masculine identity have lower GPAs and can resort to “behaviors that preserve their masculine image, such as social isolation and substance abuse, instead of asking for help.” This is crucial: The male students in this study feared appearing “weak” by seeking help, which further eroded their “resilience” to bounce back from academic struggles. Then there was this: “Official warnings from an instructor or the university, designed to alert and intervene, may push male students into despair and increased deceleration toward goals.”

If colleges, whose counseling centers are taxed, are going to truly address this — if they are truly invested in male students — then they need to find new ways to better serve students’ emotional and mental health needs. At the student level, this can start with mentored, peer-driven support groups for young men. At the administrative level, academic advisers can lead with empathy, support and curiosity (“Why do you think you’re struggling?”), which will encourage collaboration.

The real emotions beneath struggles aren’t just the problem for males and education. They are the solution.

Andrew Reiner teaches at Towson University in Maryland and is the author of “Better Boys, Better Men: The New Masculinity That Creates Greater Courage and Emotional Resiliency.”