The Parkland massacre and the flawed argument against capital punishment 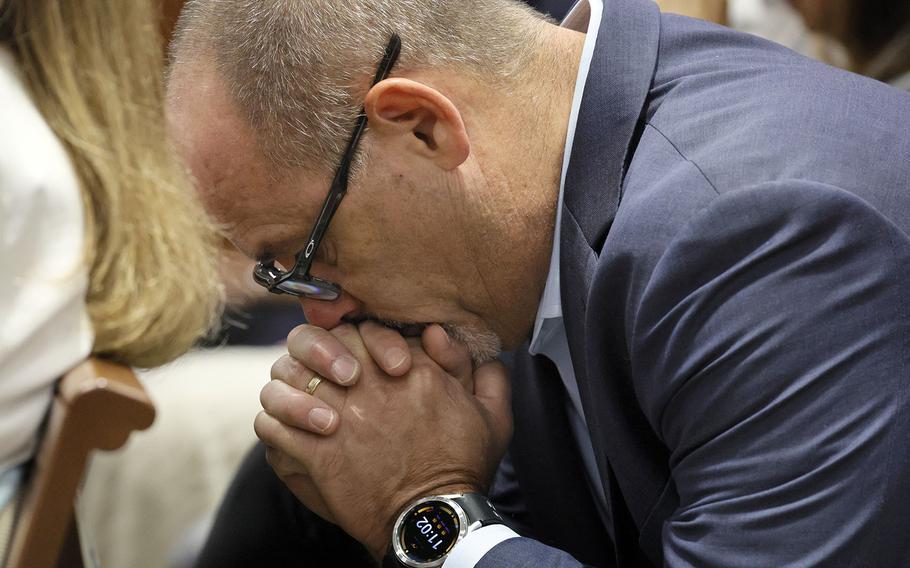 Fred Guttenberg in the courtroom as sentencing recommendations are read in the trial of Marjory Stoneman Douglas High School shooter Nikolas Cruz at the Broward County Courthouse in Fort Lauderdale, Fla., on Oct. 13, 2022. Guttenberg’s daughter, Jaime, was killed in the massacre. (Amy Beth Bennett, Sun Sentinel/TNS)

Jurors recently handed down their decision in the sentencing trial of Nikolas Cruz, the man who murdered 17 people, mostly children, in the Marjory Stoneman Douglas High School shooting in 2018 in Parkland, Fla. They opted against the death penalty, choosing instead to give Cruz life in prison without parole.

The three jurors who voted against the death penalty did so based on “mitigating circumstances” from Cruz’s life.

They made the wrong call.

Still, their rationale is superior to the reason many will agree with the sentence: a blanket opposition to the death penalty. Public support for capital punishment has slid over the last 30 years, remaining a majority opinion but barely so.

Those who oppose death as a punishment often have kind, even noble intentions. They abhor violence, even when administered by the state. They wish no more people to perish than already do by war and crime. Yet their well-meaning beliefs do not translate into justice or the common good. In contrast, we can see support for the death penalty in the U.S. Constitution, in America’s religious history and in the principles of justice.

First, the Constitution assumes death is a legitimate punishment. The Fifth Amendment opens with, “No person shall be held to answer for a capital, or otherwise infamous crime, unless on a presentment or indictment of a Grand Jury.” While giving the defendant protections, this clause assumes that some crimes are “capital,” meaning those worthy of death. Both the Fifth and 14th Amendments contain a clause stating that no person shall “be deprived of life, liberty, or property, without due process of law.” These provisions also provide procedural safeguards. But they assume that the government can in some instances take away life so long as it follows those safeguards.

Second, America’s Christian heritage lends support to capital punishment. In Genesis 9:6, God tells Noah that “whoever sheds the blood of man, by man shall his blood be shed, for God made man in his own image.” The opening might seem merely descriptive, that people will try to kill the killers. But the closing phrase, tying those responsive actions to man being made in God’s image, shows it to be prescriptive. Murderers will be put to death as an act of just punishment. Moreover, Romans 13:4 declares that “if you do wrong, be afraid, for he (the ruler) does not bear the sword in vain. For he is the servant of God, an avenger who carries out God’s wrath on the wrongdoer.” Bearing the sword means executing violence, including lethal violence. One might note Deuteronomy 32:35 in response, wherein God says vengeance is his, or Matthew 5:38-40, which calls on Christians to turn the other cheek against misdeeds. These passages deny both individuals and the church any power to punish by death, confinement or fine. Yet these texts cannot mean no place exists for broader human dispensing of these penalties at the level of the state. For, as Genesis 9 implies and Romans 13 makes explicit, God has decreed that he will not wait for Judgment Day to see any justice done but works now through government to dispense correction, including retribution for crimes.

Third, our Constitution and religious history comport with the death penalty because that punishment itself is consistent with justice. Restraint and reform have a place in how we treat lawbreakers. But retribution also plays a vital role as a purpose of punishment. We should avoid private individuals exacting vengeance. Mob justice usually is injustice, with the passions of the people running roughshod over contrary evidence and proportionality between crime and penalty. But retribution through the law, by public officers, partakes more of reason and provides time as well as means to assess guilt and innocence. Punishment, including death, should be done with care and caution. But it should be done.

One might object that death as a penalty is hypocritical and cheapens respect for the sanctity of life. But to say that exacting death is hypocritical, especially on murderers, undermines the basis for all punishment. For imprisonment of kidnappers might be called hypocritical, infringing liberty because a person denied the same to his victim. Or fines for theft might fall to the same accusation, violating the thief’s right to property. That capital punishment cheapens life flows from a similar misperception since any punishment could be accused of lacking respect for the right whose exercise it limits. Yet Genesis 9:6 pinpoints that penalties, including death, can affirm a society’s respect for human life.

Capital punishment demands the highest price for murder. What you exact from killers says much about what you think of killing.

No punishment can make the Parkland victims or their families whole again. But we should take the justice we can achieve, however imperfect. We owe them that much.

Adam Carrington is an associate professor of politics at Hillsdale College in Hillsdale, Mich.