The Army of 2022: We’re in a bad place if soldiers can choose what mandatory training they complete 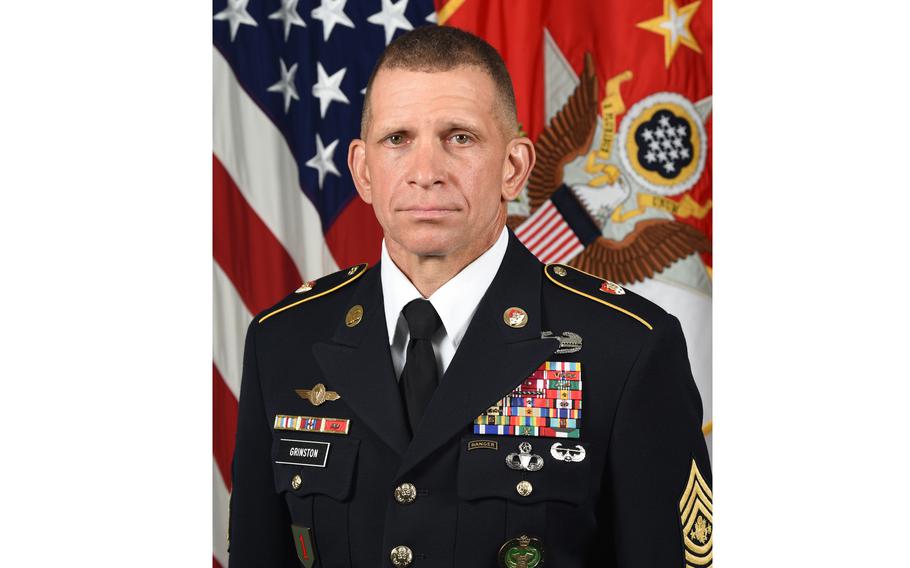 U.S. Army Command Sgt. Maj. Michael A. Grinston, 16th Sergeant Major of the Army, poses for his official portrait in the Army portrait studio at the Pentagon in Arlington, Va, Aug. 12, 2019. (William Pratt/Army)

Earlier this month Sgt. Maj. of the Army Michael Grinston publicly espoused willful disobedience as the solution to a problem: more mandatory Army training requirements than time to complete them.

The solution, according to Grinston: “Don’t do it.” He was referring to Army mandated online training requirements including: anti-terrorism training; ethics; equal-opportunity; sexual harassment, assault, response prevention (SHARP); and threat-awareness, along with half a dozen more subjects.

According to Grinston, soldiers should determine what’s important and if that means not completing mandatory online training requirements, so be it. Note that Grinston’s comments, which I find irresponsible, are coming from the most senior enlisted member of the Army.

I served in the Army for 20 years, initially as an infantry officer and later as a judge advocate, and never heard a noncommissioned officer tell subordinates they should pick and choose which regulations they followed.

That the time required for mandatory training exceeds available training time confirms there is an issue. But the solution is to be found at the source of the problem – the Department of the Army, the offices where Grinston works.

The problem is not just with the sergeant major of the Army. Grinston’s boss, Gen. James McConville, chief of staff of the Army, not only didn’t correct Grinston, he added derision to the call to disobey.

McConville was incredulous at the idea that “[p]eople actually do this stuff?” He added that he “was a division commander for three years, and I never did this stuff.” To be clear, the “stuff” are mandatory online training requirements developed by the Army staff supervised by … McConville.

McConville explained that units “don’t have the time” to complete all the training sequences — which his staff has directed them to do. According to McConville, solving this problem is “when senior leaders need to come in,” a curious comment by the most senior officer in the Department of the Army.

The Deputy Chief of Staff G-3/5/7, a lieutenant general who works directly for McConville, issued the requirements by promulgating Army Regulation 350-1, aptly titled “Army Training and Leader Development.” If McConville believes the online training requirements are excessive and/or unnecessary, he can remedy the situation in 60 seconds by calling the Army G-3/5/7 into his office.

Instead, through their ill-advised comments, Grinston and McConville not only undercut their own authority but that of leaders throughout the Army.

Their comments are akin to IRS policymakers complaining about the tax code that their office produces and then laughing at the people who actually try to follow the code so they can pay their taxes. Just as telling taxpayers to ignore difficult code requirements and do what feels right could produce a disaster for the IRS and the finances of our country, communicating that mandatory Army training is negotiable will end badly.

The Army mission is to fight and win our nation’s wars. Undermining attitudes toward the critical training to accomplish these missions is a mistake. Stated plainly, Grinston and McConville’s guidance, if followed, jeopardizes the Army’s ability to function.

Regulations are on an equal footing with orders in enabling the military to operate in an organized and effective manner. This equivalency is demonstrated by the Uniform Code of Military Justice, which in Article 92, criminalizes failing to obey an order or regulation. Similarly, enlisted members of the Army take an oath to obey “the orders of the officers appointed over me, according to regulations and the Uniform Code of Military Justice.”

What will happen when a company first sergeant directs the unit to conduct all required training, but various subordinate noncommissioned officers follow Grinston’s and McConville’s direction that some training is optional?

Imagine the first platoon sergeant doesn’t believe ethics training is as important as maintenance, so she ignores the ethics training and orders soldiers to remain in the motor pool. The squad leader for first squad is happy to not spend time on ethics training. Another squad leader doesn’t believe there is an equal opportunity issue, so there is no need for that training. Within first squad are two team leaders, one of whom believes SHARP training is not a good use of soldiers’ time, so that’s out, while the other team leader takes a dim view of anti-terrorism training and doesn’t conduct it. Before long you’ve have an Army that believes training is cafeteria-style and can be ignored, allowing personal judgment to erode overall readiness.

According to Grinston and McConville, mandatory means optional, at least for online training. What about other training mandated by regulation? May soldiers pick and choose what they do based on their individual assessment of importance regarding the regulation requiring physical training or rifle marksmanship?

What about an order to attack? Is that also subject to individual assessment?

The sergeant major and chief of staff are supposed to solve problems and lead the Army.

But they are creating problems, and if they are leading the Army, it’s not forward.

That neither the chairman of the Joint Chiefs of Staff nor the secretary of defense have publicly commented on the Army leadership’s view of “optionally mandatory” training is also problematic.

If the Pentagon doesn’t care whether mandatory training on subjects like anti-terrorism training, ethics, equal-opportunity, and SHARP is actually done, then it’s time to involve a part of the U.S. government that likely does care – Congress.

The question isn’t if the House and Senate Armed Services committees (HASC/SASC) should investigate the Army leadership’s statements but when to conduct the inquiry.

Congress can wait until, for example, the aftermath of future sexual assaults within an Army unit and an investigation determines that troops had not received SHARP training because their unit leaders did as instructed by Grinston and McConville.

Or, since we can see this future train wreck coming, we can urge Congress to investigate now and prevent it from happening.

Chris Jenks is a professor of law at the Dedman School of Law, SMU Dallas. As a law professor, he served as the Special Counsel to the Department of Defense General Counsel. He is a West Point graduate who served initially as an infantry officer and later as a judge advocate.