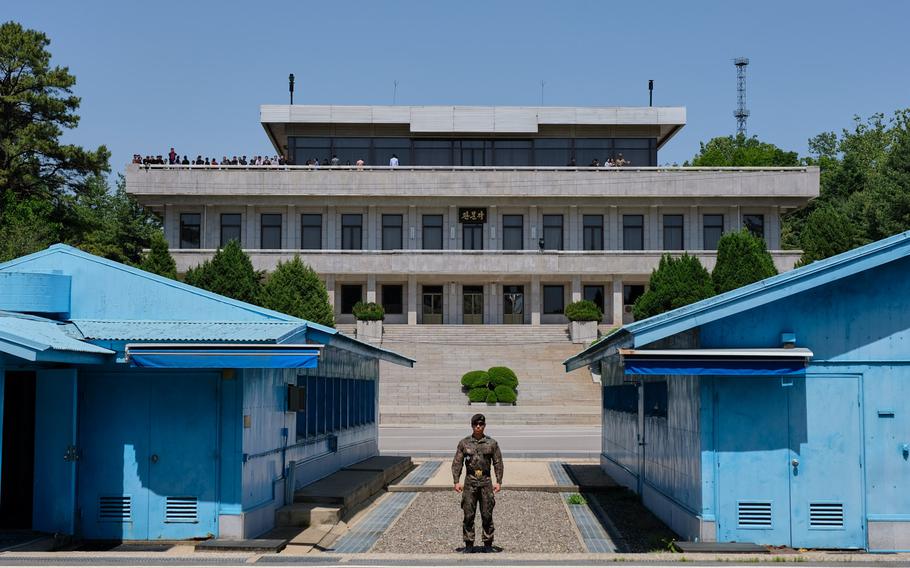 A South Korean soldier stands in front of the Military Demarcation Line in the Joint Security Area, May 29, 2019. A North Korean tour group can be seen on the roof of the building in the background. (Matthew Keeler/Stars and Stripes)

Korea is in the news on several fronts, with even more noteworthy developments than usual.

First, the negative news. In the latest outrageous declaration from North Korea, leader Kim Jong-un has decreed nuclear weapons may be used preemptively to defend the nation. The puppet parliament of his totalitarian nightmare state, the Supreme People’s Assembly, this month rubber-stamped a law confirming the point.

This follows a public rejection last month of a proposal from new South Korea President Yoon Suk Yeol to provide economic assistance. The people of North Korea, suffering in desperate poverty for decades, are in extreme need of such relief. The privileged ruling elite make clear they couldn’t care less.

In a switch from routine, North Korea leader Kim did not address this subject. Rather, his sister Kim Yo-jong, also a senior official, rejected the offer, fueling always-active speculation mills. The new nuclear declaration indicates Kim Jong-un, rumored to be sick, is still the leader.

More important is what is now taking place in South Korea. The government in Seoul has just imposed heavy fines on global tech companies for aggressively harvesting personal data on their customers.

Google and Meta, which owns Facebook and Instagram, are being fined a combined total of the equivalent of $72 million. South Korea officials have concluded after review of evidence that the massive information and communications companies are not open and transparent about their practices, especially in collecting information from customers using other platforms and services.

Predictably, the corporations issued immediate denials of any unfair predatory practices, along with expressions of alarm that they are targeted. As is usually the case when a powerful company pleads victimization, at least some healthy skepticism is in order.

Google and Meta are enormously successful players in an intensely competitive, high-stakes business environment. They can take care of themselves, and have the option of appealing in court the penalties they face.

Finally, on Sept. 16 an extremely important military ceremony took place on a runway at Incheon International Airport in South Korea. With practiced discipline, a Republic of Korea Army (ROK) honor guard of nine soldiers stepped precisely, uniformly toward a line of counterparts from the People’s Liberation Army (PLA) of China.

The ROK soldiers carefully placed nine ornate polished boxes on a table. Ambassador Xing Haiming, China’s representative to South Korea, ceremonially placed the flag of China on each box, which contained the remains of a Chinese soldier killed during the Korean War.

A PLA honor guard carefully carried the nine boxes into a massive Y-20 China transport aircraft. Soldiers and diplomats similarly honored more boxes of remains and personal effects of the dead. In total, 88 boxes containing China’s deceased were loaded on the imposing transport.

Similar ceremonies accompanied the arrival of the aircraft in China and burial of the remains. Two of China’s state-of-the-art J-20 stealth jet fighters escorted the transport plane during landing.

Over the past six decades, South Korea has achieved phenomenal economic success. The economy is a global powerhouse, leading the way in high-tech and other industries. Political democracy is also firmly established, along with rule of law. Close U.S. alliance benefits both nations, and the region.

Repatriation of PLA soldiers’ remains began in 2014. According to South Korea defense officials, the effort reflects “international law and the spirit of humanity.”

Arthur I. Cyr is author of “After the Cold War — American Foreign Policy, Europe and Asia” (NYU Press and Palgrave/Macmillan).