Never again yet again: A call to action for Ukraine 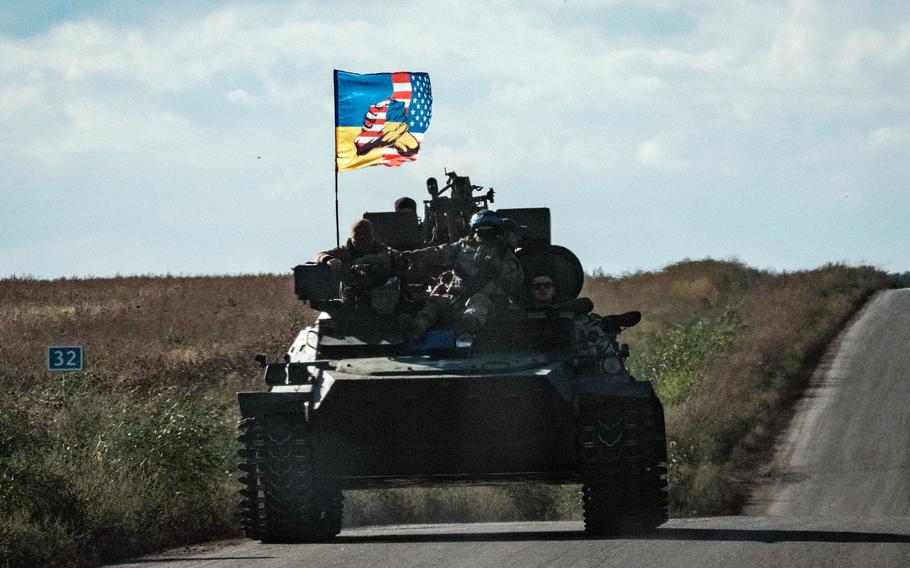 A Ukraine tank rides with a flag picturing Ukraine and US flags shaking hands in Novostepanivka, Kharkiv region, on Sept. 19, 2022, amid the Russian invasion of Ukraine. (Yasuyoshi Chiba, AFP via Gerry Images/TNS)

Decade after decade, the voices of the American people, Western politicians and the international community swell into a chorus promising that “never again” will they stand by during inhumane conflict. Never again will they idle by while autocrats stifle and oppress democracy. Never again will they watch from the sidelines while human rights are abused and war crimes go unaddressed.

The human cost of war is, for many, unimaginable. Even when media images pull at heartstrings, the reality of war remains a distant, abstract concept. This distance makes it all too easy for our leaders, who have been down this road before, to simply condemn atrocities, do the bare minimum and move on to confronting the challenges presented by the next news cycle.

Yet for a group of political, civil society and military leaders participating in the McCain Institute’s McCain Global Leaders program, this cycle of complacency is now intolerable. The leaders, following Sen. John McCain’s penchant for being on the front lines, recently traveled to Poland to examine the response to Vladimir Putin’s lawless invasion of Ukraine and to witness and provide relief to the human toll this invasion has caused the Ukrainian people.

Set against the backdrop of the now infamous Polish railway stations that serve as the first point of refuge for thousands of Ukrainians crossing the border daily, the McCain Global Leaders witnessed that it is not the United Nations or the numerous, other well-equipped humanitarian relief agencies providing support to Ukrainian refugees. Instead it is local leaders and ordinary citizens from around the world, such as those volunteering with the World Central Kitchen, fulfilling our shared duty to provide relief to the over 3.5 million who have sought safety in Poland, the largest European refugee crisis since World War II.

As women and children emerged from the train station after leaving family members and much of their lives behind, it became clear to our group that as an international community we were hurtling toward yet another historical “never again” moment. In the station, it is impossible not to be moved by the devastation inflicted on the Ukrainian people. Stacks of luggage, containing the most prized possessions, cluttered hallways only to be met with rows of temporary cots for mothers and young children seeking a brief reprieve from their journey.

While the United States’ military was stationed at an airfield nearby to provide air defense to its ally and fellow NATO member, Poland, it was clear that the real heroes in this battle for democracy, the Ukrainian people, are left to fend for themselves. There was not a single United Nations staff person or agency visibly represented at the train station. Nor were there representatives from the European Union, NATO or the Organization for Security and Co-operation in Europe.

As we have seen time and time again, the international community and Western governments are failing to do what is necessary. Fearful of crossing imaginary lines controlled by autocratic governments and dictators who are often given far too much autonomy and influence in international organizations, Western leaders seem to prefer to stay home behind their enlightened pulpits from which they can pontificate about the blessings of democracy, international order, and peaceful transitions. For the people of Ukraine, these pretty words offer a stark contrast to the reality with which they exist.

For the McCain Global Leaders and McCain Institute staff who were present at that train station, this is simply unconscionable. We can and must do more to support Ukrainian citizens. We must not continue to abandon them on the frontline in our global battle for democracy and human rights. We must instead be inspired and led by the fearless examples set by Ukrainian and Polish citizens alike to ensure that this moment is the one where the international community chooses to make good on its pledge of “never again.”

The United States and international community need to establish and fund a systematic approach to the refugee crisis. This duty must not be left to a handful of privately funded relief organizations and local governments to provide relief to the millions of Ukrainians fleeing the war. The United Nations, European Union, NATO member nations and the United States all have the resources and capacity to lead a comprehensive response, as they have done for similar refugee crises around the world. This approach should include a stronger, organized presence of UNHCR, the World Food Programme and other agencies. While there has been strong and measurable military support, we must also recognize the human cost of war and provide as much support as possible to those seeking refuge in and outside of Ukraine.