A decision tree for Biden if Putin goes nuclear

Russian President Vladimir Putin doesn’t want to use nuclear weapons, just as he doesn’t want to still fight his “special military operation” against Ukraine. But he is still fighting — because he’s unable to win. That also means he might yet drop a nuke, as he once again threatened this week. The United States and its allies — and Putin’s putative friends in China and elsewhere — need to decide now how they’d react.

For Putin, nuclear escalation wouldn’t be a way of snatching victory from the jaws of defeat, but of snatching survival — political or even physical — from the maw of oblivion. Unlike democratic leaders, he has no way to retire gracefully after all the damage he’s done. As a quack historian of the Tsars, he knows that his end could be messy.

This is why he might dust off a Russian doctrine that Western analysts call “escalate to deescalate.” It means going nuclear to avoid losing a conventional (non-nuclear) war. Putin would detonate one or more “tactical” (as opposed to “strategic”) nukes. These are low-yielding blasts large enough to eliminate a Ukrainian army position or logistics hub — but too “small” to erase an entire city.

By dropping such a bomb, Putin would be signaling his willingness to use more. His motivation would be to force Ukraine to surrender and the West to get out of the conflict — but without inviting automatic retaliation by the U.S. Putin wants his enemies to stand down, so he can declare victory and stay in power.

Such an act of desperation, it goes without saying, would mark the darkest turn in human history since Hiroshima and Nagasaki. It would not only kill, maim and traumatize huge numbers of innocent people — Putin is already doing that — but also cause lasting terror throughout the entire world.

Putin’s escalation would burst the Cold-War-era taboo against using nukes for anything other than deterrence. If he’s seen to get away with that, other nuclear rogue states would take their cues. This in turn would force countries that have forsaken nuclear weapons in the name of non-proliferation or disarmament — as Ukraine did in the 1990s — to build their own arsenals. Arms control would be dead. Nuclear warfare, by design or accident, would become more likely in more places, from West to South and East Asia.

What, then, should President Joe Biden do? He must deter Putin, obviously, while simultaneously preparing a response if Putin does escalate. But these are two aspects of the same decision: The implied response also does the deterring.

Matthew Kroenig at the Atlantic Council, a think tank, has summarized some of the options. One answer to a limited Russian nuclear strike is to double, triple or quadruple all the measures the West has already taken against Putin’s regime, completely cutting off Russia from the Western world. Instead of caving, the West would also send more weapons to Ukraine, and more forces, including nuclear arms, to NATO’s eastern front.

Such a deliberately limited response would aim to stop an escalation spiral before it starts. The problem is that Putin may not find this response frightening enough to be deterred. He’s already a pariah, and Russians are already aching under sanctions. If he’s dreading the end of his own reign or life — and that, remember, is the scenario we’re contemplating — he’d still go all in.

Another problem is that a restrained response would look woefully inadequate to the Ukrainians and the rest of the world. Kyiv’s friends would lose heart. Dictators such as North Korea’s Kim Jong-Un would conclude that you can go ballistic and survive.

So Biden’s response must be more muscular. He has two military options. One is to respond in kind, by also deploying a low-yield tactical nuke for show — in the Arctic Ocean, say, or remote Siberia. Its mushroom cloud would be meant as a Stop sign for Putin. It would also reassure Ukrainians and the world that the U.S. will answer escalation tit for tat — that it’ll enforce the nuclear taboo.

The problem is that this would turn the confrontation into an apocalyptic staredown, possibly leading to a series of tactical detonations. And Russia, which is roughly even with the U.S. in strategic nukes, has about 10 times as many tactical warheads to play with. The scenarios become impossible to calculate, especially when factoring in human error. There would be a risk of Armageddon.

The better military option is therefore a conventional U.S. strike on Russian forces. The target could be the exact base that launched the nuclear strike. Or it could be Russian troops in Ukraine.

This would signal to Ukraine and the world that any breach of the nuclear taboo will be punished. And the message to Putin would be that he can’t escalate to deescalate, because the West will step in to defeat him.

The drawback, obviously, is that this amounts to a direct clash between Russia and NATO, and therefore incurs the risk of World War III, with Armageddon still one scenario at the end. Putin might conclude that the U.S. isn’t prepared to retaliate with nukes, and launch even more nuclear strikes.

This raises another question Biden must answer: Once he’s decided how he’d respond to various levels of nuclear escalation, how should he communicate that — to Putin, allies, enemies, and the public?

If he wants to maximize the deterrent value of his communication, he’ll be clear, specific and public — If Putin does X, we’ll do Y. The problem there is that Biden would forfeit all flexibility when Putin does something slightly different from X.

The better option — which Biden appears to have chosen — is to be deliberately vague in public. The disadvantage is that this keeps even the Ukrainians guessing. The advantage is that Putin must assume the worst.

There is another possibility. Return to our premise: Putin doesn’t want to go nuclear, but will if he fears that his own survival is threatened. The US could make plans for regime change — that is, for taking Putin and his inner circle out — in the event of nuclear escalation. In this case, it would be best to communicate that not vaguely but specifically, and not publicly but privately - to Putin.

If there is any glimmer of hope in this dark time, it glinted in Uzbekistan last week, when Putin met the leaders of India and China, Narendra Modi and Xi Jinping. Both countries are nuclear powers. India is non-aligned, China is nominally behind Putin. But both expressed to Putin their “concern” over his war.

No matter the enmity between Beijing and Washington, no matter the other conflicts going on, the specter of nuclear war must and can unite the world against the threat. Discreetly, Biden, Xi and all other world leaders could put aside their differences and send Putin this message: You go nuclear, and we’ll make sure you’re out.

Andreas Kluth is a Bloomberg Opinion columnist covering European politics. A former editor in chief of Handelsblatt Global and a writer for the Economist, he is author of “Hannibal and Me.” 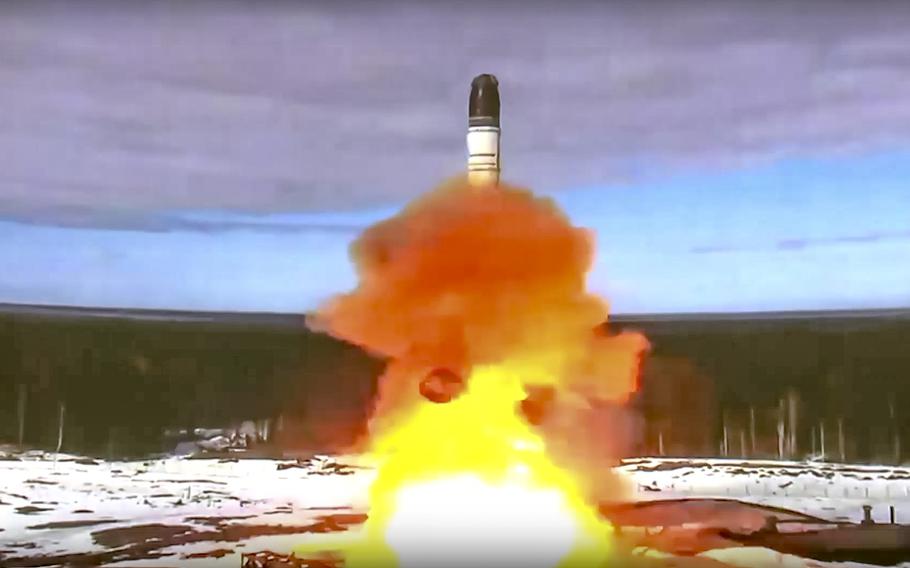 In this handout photo released by Roscosmos Space Agency Press Service on April 20, 2022, the Sarmat intercontinental ballistic missile is launched from Plesetsk in Russia’s northwest. Russia said on Wednesday it had conducted a first test launch of its Sarmat intercontinental ballistic missile, a new and long-awaited addition to its nuclear arsenal which President Vladimir Putin said would make Moscow’s enemies stop and think. (Roscosmos Space Agency Press Service)