Did Xi just learn what not to do from Putin? 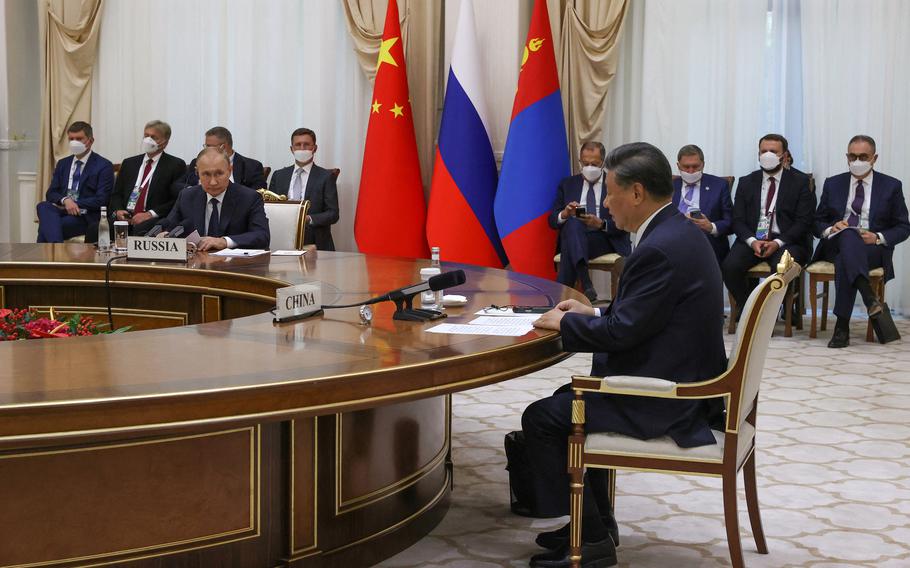 This was not the way Russia’s Vladimir Putin wanted to look, for all the world to see on Thursday, when he walked into the massive and bizarrely flowered and leafy conference room in Uzbekistan for his much-needed meeting with a deep-pocketed counterpart, China’s Xi Jinping.

Putin, who has perfected the art and skill of walking into a summit with his dictator’s swagger-strut that exudes confidence, must feel these days like he’s walking with his telltale tail between his legs. After all, he has just had his worst-ever week — at the end of what has so far been his worst-ever year. We’ve all seen it play out across our news screens. And all the world knows he has only himself to blame — he started his war in Ukraine.

Ukraine recaptured more land in a matter of hours than Russia had captured since April.

“It’s impossible to defeat Ukraine using the resources that Russia is now trying to fight with, using this ‘colonial war’ method,” declared a former Russian lawmaker, Boris Nadezhdin. “ … We either call for mobilization and go for a full-scale war, or we get out.”

Other talking heads and print pundits carefully blamed Putin’s generals and civilian advisers for giving Russia’s president bad advice. But the most stunning bottom line was this: Ordinary Russians were finally getting the truth that Putin’s war was going horribly — and could get worse.

Analysts had long ago concluded Putin had started a war pitting Russian invaders and occupiers (who had no idea why they were there or what they were supposed to be fighting for) against Ukraine soldiers (who were fighting for the love of their country and to defend the lives of their families).

Back in February, when Putin met with Xi at the Winter Olympics in China, and then when he ordered the invasion of Ukraine, he was brimming with overconfidence that this would be a quick and clear victory. He ordered his troops to swoop in and capture Ukraine’s capital, Kyiv.

Remember that 40-mile-long convoy? His Kremlin-approved TV talking heads, brimming with Putin’s overconfidence, assured Russians this would be a cakewalk to victory. Maybe just a few days. Remember how quickly it stalled? How easily it was destroyed by Ukraine defenders as Russia’s troops fled in panic in June?

Now this. No wonder those Russian talking heads and print pundits sounded stunned and angry last Monday after Russia’s soldiers panicked and fled, yet again — this time in northeast Ukraine. And no doubt Putin was stunned and angry to hear all that on his government-controlled media.

But all that noise got drowned out by what Putin heard Thursday. He heard the shrill sound of silence — coming from his ally, China’s President Xi. Back in February, Xi had declared that his partnership with Putin had “no limits.” But on Thursday, Xi seemed to feel their partnership had reached its limits after all.

Stunningly, Xi didn’t even mention Ukraine in his public remarks. Also stunningly, Putin publicly acknowledged Xi had “questions and concerns” about what happened in Ukraine.

The two leaders sat far away from each other, at the opposite ends of a huge horseshoe-shaped conference rostrum. They talked at each other across a mammoth coffin-shaped planter of dark green leaves and red flowers. It looked like a setting from a Hollywood satire.

Putin, playing his role perfectly, looking unusually grim in the televised portion of their meeting, said: “We highly appreciate the balanced position of our Chinese friends in connection with the Ukrainian crisis. We understand your questions and concerns in this regard.”

Xi made only generalized comments about Russia’s and China’s overall views of the world — and never mentioned publicly any questions or concerns that Putin revealed he had.

Well here’s one Xi should have been concerned about — as should every other world leader. What sort of mass destruction might the now globally humiliated and militarily out-generaled Russian dictator do out of desperation and revenge? Will he seek to destroy Ukraine’s innocent civilians with a chemical weapon? A tactical nuclear weapon?

Last December, I suggested in a column that, if Xi really wants to be the leader of the global economy, there’s a lot he could learn from Putin — “not about what to do, but about what not to do.”

Maybe last week was the week Xi figured it out. Maybe.