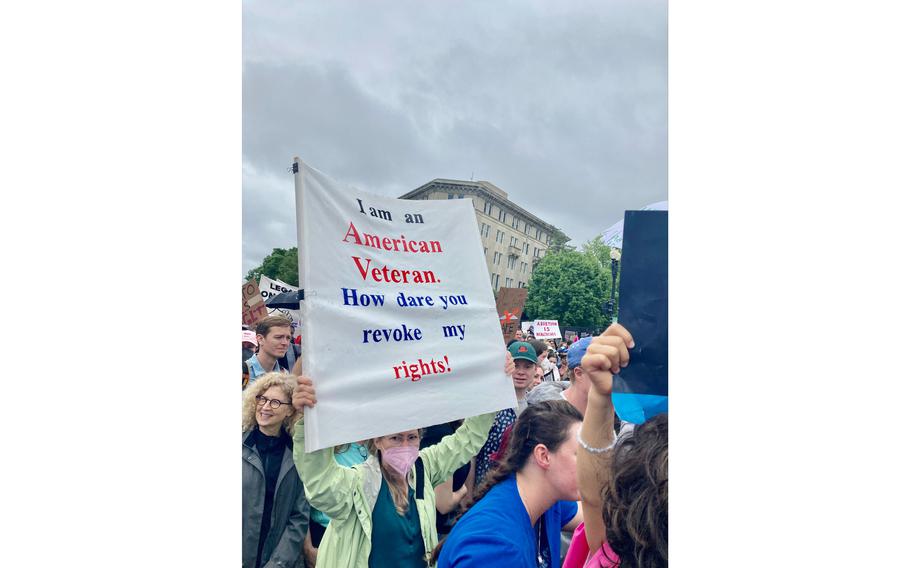 Protesters gather in support of abortion access on May 14, 2022, during a march outside the Supreme Court building in Washington, D.C. (Caitlin Doornbos/Stars and Stripes)

This year, the U.S. military is behind recruiting goals by 23%, with the Army alone estimating it will miss goals by nearly 40,000 personnel over the next two years. Now, with the Supreme Court’s decision to overturn Roe v. Wade, a new front has emerged that will likely exacerbate the military’s personnel struggle. The recent decision by the Department of Veterans Affairs to provide abortion access to female veterans is much needed; unfortunately, active-duty service members must still work through the military’s health care system to access it.

The Dobbs v. Jackson Women’s Health Organization ruling adds additional stressors to female service members who already face a difficult military culture and environment that often appear quite hostile to their needs. Nearly 1 in 4 servicewomen report experiencing sexual assault in the military, more than half report sexual harassment, and last year, reports of sexual assault surged in the military by 13% The suicide rate for women in the military is already double that of the national population, a fact that holds true today. Women in the military will now face increased risks if they’re stationed in a state that doesn’t provide access to reproductive care.

The Pentagon acknowledged as much July 29 in a congressional hearing on the growing military personnel crisis. A 2017 report revealed that 7% of women on active duty reported an unintended pregnancy in 2011 — an estimated total of 14,000 unplanned pregnancies alone — compared to 4.5% of civilian women. More than 90 abortions since 2016 have occurred at Department of Defense facilities. The military’s struggles to bring in new recruits are often viewed as a pressing national security concern. Following this logic, anything that exacerbates personnel problems is also a national security issue. Restrictive reproductive health laws are now one of those factors.

Due to the military’s recruiting crisis, there have been calls to Congress to fix the issue through various actions, yet there’s been little dialogue about how to ensure that women who do choose to join are guaranteed reproductive rights at their assigned duty stations. Policymakers who ignore this fact when complaining about the risks of having a weakened military — while simultaneously blocking legislation to enshrine the protection of reproductive rights into law — are being disingenuous. One in 5 service members are women. They make up 51% of eligible recruits. And as of 2015, all jobs previously closed to women in the military were opened after years of debate.

Still, the military’s culture has continued to be hostile to women. The military justice system continues to inadequately apply equal punishment across its ranks, not only in cases of sexual misconduct but also in cases of domestic violence, which occurs at a higher rate than in the civilian population.

These issues already push women to leave the military early at a rate almost 30% higher than men. Federal law prohibits military health facilities from providing abortion unless the pregnant person, service member or dependent’s life is in danger or if the pregnancy was caused by rape or incest. That means service members who seek abortions for issues such as fetal abnormalities already face obstacles such as having to ask for time off from commanders and being forced to travel hundreds of miles for treatment. Now, the Dobbs decision has lessened the already slim available medical options for female service members and may open them up to future prosecution.

Additionally, there is no Defense Department regulation that clarifies whether women are guaranteed time off if they need such treatment. That means they are required to obtain approval from their chain of command before going on any type of medical leave for reproductive care not covered by current regulations. This is an immediate privacy concern, as female service members run the very real risk of retribution from commanders who may be against abortion. Women already face retaliation for reporting sexual assaults: A 2015 report from the Human Rights Watch found that 62% of those who reported sexual assaults faced vindictive consequences and retaliatory behavior, often from their own leaders who now hold the power to force decisions upon thousands of women in the armed services who need reproductive care.

Without legislative action, the military will rapidly become unviable to the millions of women in the nation who now have to choose colleges, jobs and homes based on individual states’ reproductive laws. Worse, for service members with wives or daughters, the restrictions may push them to quit out of fear for their loved ones, an additional detrimental effect on military personnel strength.

It’s hard to convince anyone to join or stay in an organization that prides itself on defending our American ideals when that same organization holds the power to require its members to serve in places where basic human rights have been taken away.

Daniel Johnson, a Roy H. Park doctoral fellow at the Hussman School of Media and Journalism at the University of North Carolina at Chapel Hill, was a journalist in the Army in 2016 in Iraq.