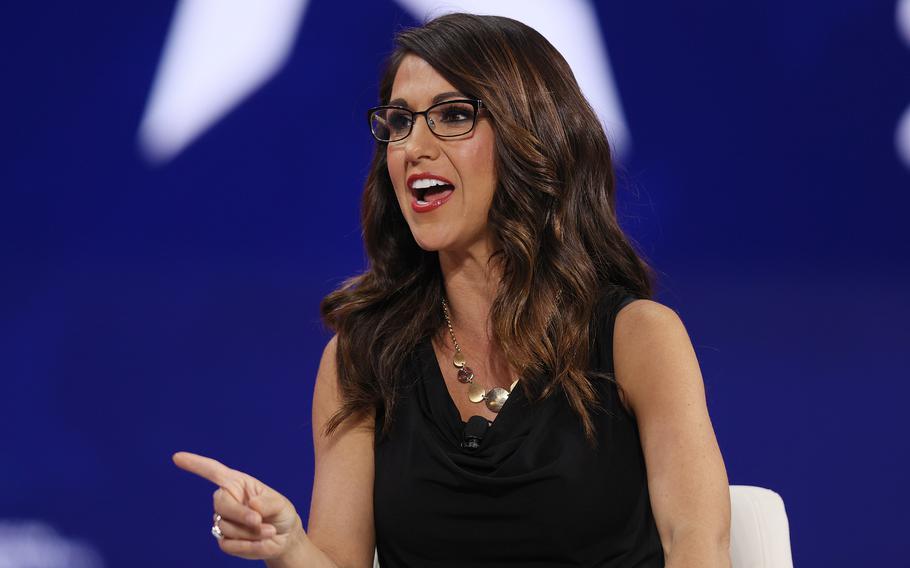 Rep. Lauren Boebert (R-Colo.), participates in a discussion on the Right to Bear Arms during the Conservative Political Action Conference held in the Hyatt Regency on February 27, 2021, in Orlando, Fla. Boebert compared the FBI to the Gestapo, Adolf Hitler’s secret police, after agents seized hundreds of sensitive documents from Trump’s Mar-a-Lago estate. (Joe Raedle, Getty Images/TNS)

Esther Finder has borne witness to the worst of humanity. Parents bleeding out as their children watched. Children murdered in front of their parents.

The stories she’s heard — of cruelty and degeneracy, bravery and ingenuity — stagger the imagination. As a teenager, Finder’s father survived a dozen Nazi concentration camps by posing, variously, as a doctor, electrician and furrier. One time he hid inside a man-size cauldron.

In all, Finder, a retired psychology professor, has recorded the testimony of nearly 250 survivors of the Holocaust.

“I can’t get into the shoes of the survivor, but I can stand close enough that I get a sense of what they went through,” Finder said in a recent Zoom conversation from her home outside Las Vegas. “There’s a lot of pain.”

But that hasn’t stopped a certain breed of heedless politician and sensation-hungry activist from blithely throwing out Nazi analogies and words like brownshirt to defend former President Donald Trump’s misappropriation of highly classified documents, or to vilify public health workers trying to stem a raging pandemic that has killed more than 6 million people.

(The court-approved search followed months of fruitless negotiation between government officials and attorneys for the ex-president, who treated state secrets as though they were his personal trinkets.)

The latest example of such callous numbskullery came last week, when Rep. Mike Garcia, the Trumpy Southern California Republican, likened the Biden administration to the Third Reich in an interview on a right-wing podcast.

“The FBI is not the Gestapo,” Finder said, with a laugh as dry and mirthless as the desert surrounding her. “The Gestapo would have just come in and shot everybody. Who are we kidding?”

Finder, 69, lost both sets of grandparents in the Holocaust. Her mother, like her father, survived Auschwitz; she lived her days with a dent in one arm from an injury suffered on a cattle car the Nazis used to transport Jews to the concentration camp.

Finder’s family history and background in psychology made her a natural, if there is such a thing, to conduct interviews as a volunteer with the U.S. Holocaust Memorial Museum and the USC Shoah Foundation, the latter founded by filmmaker Steven Spielberg to document the stories of witnesses and survivors.

The work is her attempt, Finder said, “to bring a touch of humanity to the numbers and statistics” that can never fully tell the horrors of the Holocaust. The taking of testimonials has also been, she said, an “incredibly enriching” experience.

“The stories of the survivors are powerful,” said Finder, whose level tone and even demeanor suggested she was once more back in front of the classroom. “They demonstrate the resilience of the human spirit and the will to live.”

On some level, Finder said, she understands why attention seekers invoke Hitler and the Holocaust.

“They do it for the shock value,” she said. “They think they’re going to make political points. They look at Nazi Germany and ... the Gestapo as the epitome of evil. You can’t get worse than that. So if you really want to insult someone, you call them a Nazi.”

But the reference, as facile as some find it, cheapens the experience of those who survived, violates the honor of those who didn’t and tramples the memories of the descendants left behind.

Morning sunlight slanted through the blinds in her home office as the temperature outside crawled to 101. Finder’s expression was grim.

She has no illusion the trespass will end. Too many are unaware, or uncaring, about the hurt they cause. Too many enjoy the heady rush of attention they get from doing or saying something that startles or provokes.

Finder wishes Holocaust defilers such as Garcia, Boebert and others witnessed some of the anguish she has absorbed over the last several decades. It’s too bad, she said, “they can’t see the look of pain in the eyes of the survivors when they hear those analogies. It cuts to the bone.”

It’s hard, though, to shame people who act so shamelessly.

Mark Z. Barabak is a columnist for the Los Angeles Times.