Passage of PACT Act is an overdue victory for veterans 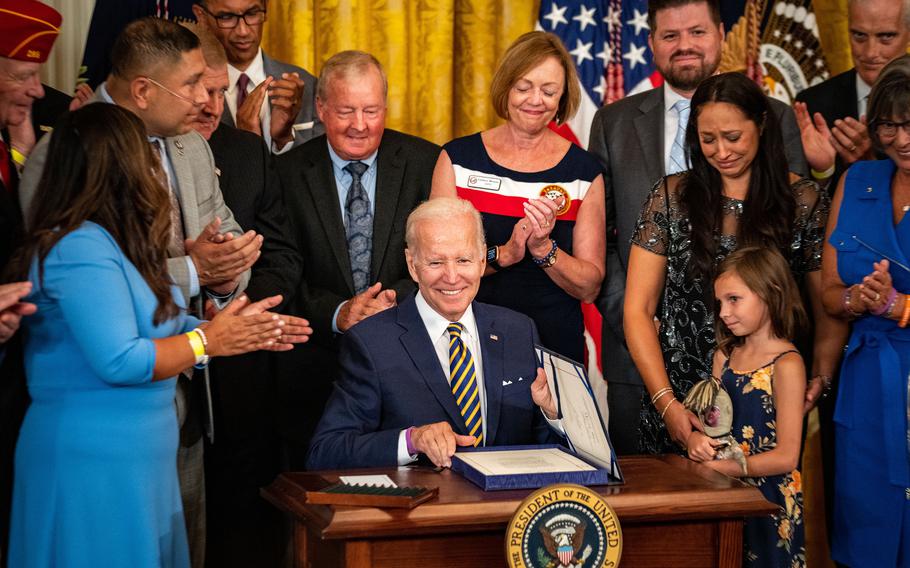 The recently passed PACT Act, which expands health care and benefits for veterans exposed to burn pits and other toxic substances, is long overdue. As someone who was closely involved with the Department of Defense’s Wounded Warrior Program for nearly 15 years, I have seen firsthand the devastating effects that burn pits have had on our veterans.

Medical research has linked exposure to emissions from burn pits — sites for burning waste on military bases — and a greater likelihood of developing respiratory and cardiovascular conditions. But while working as the Air Force’s primary advocate for Wounded Warriors at Walter Reed National Military Medical Center in Bethesda, Md., I was approached by many veterans seeking help with undiagnosed illnesses they attributed to burn pits and oil fires in Iraq. These veterans were frustrated. They felt that no one believed them or understood what they were experiencing. They didn’t know how to prove that their illnesses were caused by toxic exposures.

The PACT Act is a victory for these veterans and their families, and I was ecstatic about the bill’s passage in early August. At the same time, I was dismayed that partisan gamesmanship had to rear its ugly head before the bill went through: 25 Republican senators who indicated their support for the bill a month prior decided to vote against it at the last minute.

Most Republicans in Congress had no problem sending troops to Iraq or other areas of conflict. But they refused to take care of them after they returned, citing the violation of so-called “budget procedures” as a flimsy rationale for their opposition.

This is immoral. When the government decides to order our troops into battle, we must then hold it accountable for tending to our veterans’ medical needs, no matter the costs. I find it baffling that we can shell out the money to fight wars but not have the funds to take care of those who face combat. As a result of this policy failure, many veterans suffer from mental and physical issues that often become lifelong challenges.

The Biden administration has provided more than $8 billion in assistance to Ukraine to fight a proxy war against Russia on our behalf. Some warmongers are now pushing to send billions to Taiwan for a potential war with China. Unbelievably, numerous officials in Congress and their pundits have no issue with how that will impact our budget.

I’m singling out Sens. Richard Shelby, R-Ala., and Mike Crapo, R-Idaho, because they voted for the Iraq resolution of 2002. That war, based on a total lie, cost us more than $2 trillion in the long term. Compare that to the PACT Act, which is expected to cost $280 billion over a decade in order to attend to military members’ medical issues, some dating back to the Vietnam War.

When I was at Walter Reed, I escorted many members of Congress who came by to visit wounded veterans. Before leaving, the legislators would thank them for their service. I would always remind those officials that it’s all well and good to thank our injured and ill veterans for their service, but what they really should do is acknowledge their sacrifice — and the often lifelong impact it will have on their health.

To those members of Congress who for whatever reason decided not to vote for the PACT Act but are quick to thank veterans for their service, on behalf of the service members and their families impacted by burn pits and other toxic exposures, I say thanks, but no thanks to your hollow words.

Dennis Fritz is a retired Air Force command chief master sergeant. He is currently the director of the Eisenhower Media Network. This column was produced by Progressive Perspectives, which is run by The Progressive magazine and distributed by Tribune News Service.