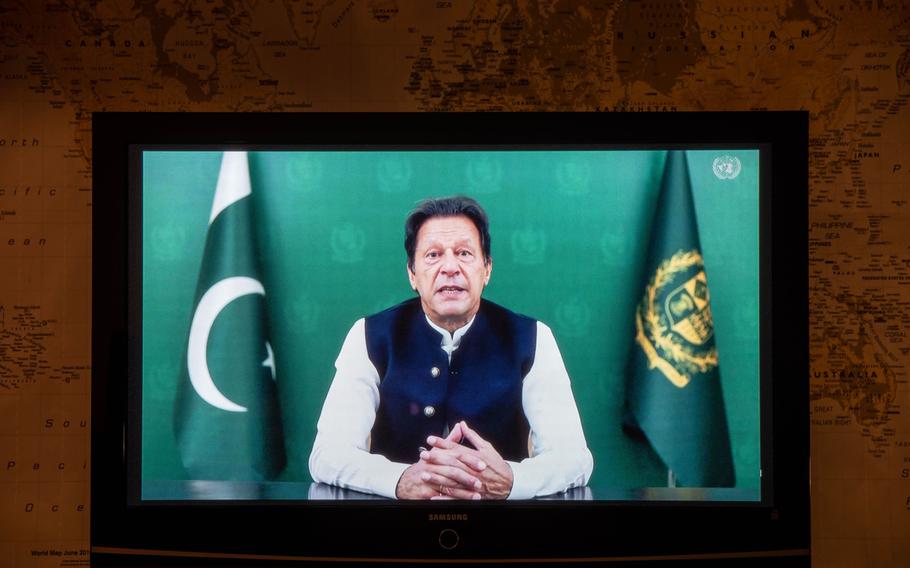 In Pakistani politics, nothing gets done by halves. A few weeks ago, one of ex-Prime Minister Imran Khan’s former Cabinet ministers, Shahbaz Gill, warned lower-ranking military officers against following “illegal orders” from their superiors. The remarks were taken as an attempt to divide the country’s all-powerful army, and Gill was promptly arrested.

This, as well as Gill’s subsequent claims about his treatment in prison, infuriated Khan, who last week warned various police officers and judges they would face consequences for their involvement in the case. An Islamabad magistrate complained that Khan’s statements counted as threats, and the police registered a case against him under draconian anti-terror laws. He faces hearings on those and possible contempt of court charges next week.

Khan’s conspiracy-minded followers fully believe that a junior U.S. diplomat masterminded their leader’s sacking as prime minister. They have no doubt Prime Minister Shehbaz Sharif and army chief Gen. Qamar Javed Bajwa are behind this attempt to take down a dangerous political rival. In fact, the real problem — and the reason you hear the phrase “political crisis in Pakistan” far too often — is likely more mundane.

In general, Pakistan’s repeated cycles of confrontation and overreaction benefit nobody but populists such as Khan, who thrive on grievance and the theater of street protest. His followers are so devoted that they imagine his every action brings glory to Pakistan. Sometimes this reaches the level of farce: Social media is full of Khan’s party men reposting headlines from around the world about his possible arrest, arguing that this proves he is a leader of truly global stature.

In this particular case, too, both the government and the army have more to lose from a standoff than Khan. Pakistan is still close to economic meltdown, elections are not too far away and recent bye-election victories in the country’s largest province suggest that Khan’s party has recovered a great deal of its electoral appeal. Arresting Khan on such flimsy grounds will make him into a martyr, encourage even more disruptive demonstrations and raise his popularity to stratospheric levels. It may well tank the economy further, too.

In Pakistan, though, as in other countries run by a shadowy “establishment” of political and military elites, top leaders don’t necessarily drive such events. After a change in power, middle-level functionaries hasten to demonstrate their absolute devotion to the permanent establishment by going after whichever political faction has been recently cast out.

When these actors — civil servants, policemen, judges — try to outdo each other in shows of loyalty, they wind up pulling counter-productive stunts such as threatening to arrest a popular ex-premier on flimsy charges.

Khan’s party has taken to calling the army’s current leadership “the neutrals,” to mock the military’s supposed conversion to political impartiality. In fact, when you hold the power that Pakistan’s army does, you can rarely be truly neutral. To put it in terms that the generals might understand, the foot soldiers of the establishment are prone to staking out aggressive forward positions that you then have to defend or evacuate.

This time, the generals will have to tread carefully. There’s a decent chance that Khan’s appeal is, in fact, great enough to divide the army itself. Bajwa’s tenure is due to end in November and he’s already been awarded — or awarded himself — one extension. Enough members of the oligarchy of corps commanders who control the nation might be inclined to retain Bajwa’s policies. But some others, and especially lower-level officers may be more drawn to Khan’s anti-Western, soft-Islamist rhetoric.

The Pakistan army has long modeled itself on modern Turkey’s, imagining itself the resolute defender of national identity and of Western alliances. It should take a look at what happened when the Turkish army came up against a real populist with a taste for confrontation. If the current standoff doesn’t end up shrinking the uniforms’ power over Pakistani politics, it could well lead to a dangerous new axis between illiberal populism, Islamism and militarism.

Mihir Sharma is a Bloomberg Opinion columnist. A senior fellow at the Observer Research Foundation in New Delhi, he is author of “Restart: The Last Chance for the Indian Economy.” This column does not necessarily reflect the opinion of the editorial board or Bloomberg LP and its owners.