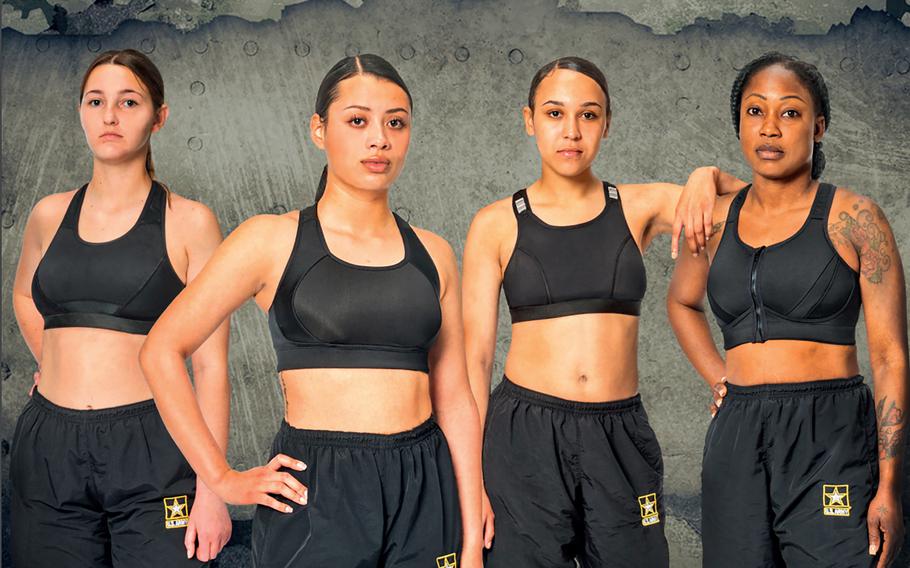 The Army Tactical Brassiere will be presented to the Army Uniform Board for approval in the fall. (U.S. Army Combat Capabilities Development Command Solider Center)

For almost a year, Army leaders have been creating an officially sanctioned military uniform bra for female soldiers. Members of the Army Uniform Board will review the final options in the fall and decide which to add to the uniform. The goal is for the Army Tactical Brassiere (ATB) to be as supportive as possible for servicewomen and enhance military readiness.

This marks a major change for the military. Until now, female service members have purchased bras for themselves. Crucially, it also reflects a change in how military leaders perceive female soldiers. In 1957, military women's bras exploded into the news because of what they meant for female soldiers' appearances. At the time, military regulations governed all aspects of outward appearances for female soldiers, from makeup application and hair care to how much food to eat. Military leaders expected servicewomen to look like "the first ladies of the land," as one early 1950s recruiting ad proclaimed.

While change has come gradually and vestiges of this thinking still affect the military, development of the ATB — with its focus on best equipping female soldiers to do their jobs — indicates that the military is making important efforts to move toward equity.

The U.S. occupation of Japan ended in 1952 but American troops remained in the country, including a group from the Women's Army Corps (WAC).

The appearances of soldiers in the WAC mattered to military officials. They commissioned fashion designer Hattie Carnegie to design WAC uniforms. During World War II, Elizabeth Arden developed a lipstick color, Montezuma Red, made to match the trim on the Marine Corps Women's Reserve uniforms. Advertising materials routinely portrayed servicewomen as well-dressed young women in tailored, smart uniforms. Even so, the supporting items beneath the uniform remained a secret until 1957.

That fall, Lt. Jeane Wolcott arrived to take over command of the 96-member WAC detachment in Yokohama. While inspecting her unit, Wolcott discovered that a staggering 95 of the 96 women did not have as polished a feminine appearance as regulations demanded. Wolcott told the women to be better prepared for their next inspection. She recommended the women shop around for shapewear, including girdles, shoulder padding and "falsies" — better known today as push-up bras.

It's unclear how news of Wolcott's disappointment spread, although it might have come from the women in the unit themselves, but the Associated Press picked up the story. It appeared in newspapers around the world; "Shape Up in Falsies, Army Orders Girls," read the London Daily Sketch headline.

Wolcott doubled down, telling the New York Journal-American, "Some of the young ladies who are not too gifted in some ways were told they could make improvements." For women who were "beginning to bulge a bit," Wolcott suggested girdles. For those who weren't "well-endowed," causing their uniform to "dip in front of the shoulders," Wolcott suggested "padding at the shoulders" or "falsies."

But because the Army did not issue servicewomen girdles or bras, Wolcott could not order the women to comply. She promised there would be no disciplinary action taken against those whose appearance did not improve, but some of the women expressed dismay at her verdict nonetheless. One servicewoman contacted her congressman to complain.

Within a week, a male commander came to inspect the women. He and Wolcott believed the women looked better in this inspection, although Wolcott said she had sent some women for medical attention so they could be placed on a diet. In her view, women needed to look feminine, and when they did not, that needed to be fixed. Wolcott explained that she wanted her "women to be women." Her view reflected military leaders' prevailing views on female soldiers at the time. Since World War II, military leaders had worried over the possibility of lesbianism in the women's services. To combat these fears, officials linked femininity and women's military service, assuming that women who looked and acted like women were also heterosexual.

In the aftermath of Wolcott's caustic evaluation, the women found support not just from the male commanding officer who inspected them next, but also from New York bra manufacturer Martin Schur. He telegrammed Wolcott: "Your order to shape up interesting but difficult, also falsies old fashioned." Instead the manufacturer would send the unit 100 bras "to uphold and uplift best traditions of the army."

The "Battle of the Bulge," as one editorial cartoonist named it, exposed tensions over the expectations for women's appearances. While some WACs reportedly scurried to purchase undergarments as Wolcott recommended, many did not appreciate being reduced to physical specimens of femininity. On the other hand, the incident reinforced for some, like San Francisco Chronicle columnist and editor Abe Mellinkoff, that women did not belong in defense roles.

In a piece with the headline "Support Urged for Strategic Areas," Mellinkoff argued that Wolcott's requests were evidence that women did not belong in the military. He reminded readers that Wolcott could not enforce her suggestions because the military did not stock "falsies."

"As a matter of fact," he wrote, "the Army cannot issue falsies because no training manual has been written on their proper use under various combat conditions." Because Army manuals tended to run "a couple of wars behind the times," Mellinkoff speculated that the military might "get falsies at least by the time they get the intercontinental ballistics [sic] missile." He was off on his calculations by more than half a century — ICBMs debuted in 1959.

Yet, while an Army bra took another 60 plus years, women began serving in greater numbers in the ensuing decades. But even as their numbers increased, equal treatment came slowly to the military. Through the 1970s, military leaders carefully shaped women's defense roles to make the idea of women in uniform acceptable to the American public. Regulations required parents to sign off on women's enlistment if they were under the age of 21. Rank limitations ensured few servicewomen, until the late 1960s, would advance to high ranks, in part to ensure that women would not command men. Women could marry while in service, but motherhood meant dismissal from the armed forces.

Military service offered women unique career opportunities yet constrained their roles at the same time. In theory, women were equal partners in defense. In reality, these limitations and the emphasis on servicewomen's femininity set women apart.

A decade after Wolcott's lecture to her troops, WACs serving in Vietnam expressed similar concerns to those aired by the soldiers she objectified, asking their superiors whether they were there to do a job or to look nice.

Sexism, sexual harassment and sexual assault remained problems in the military even as women played an increasingly large role in American defense.

In 2015, the military finally eliminated gender-based combat restrictions. In the years since, servicewomen have achieved "firsts" across the armed forces as they began to qualify for roles previously only open to men.

Yet this process has not been easy. Today, women achieve their positions based on their physical and mental capabilities. But even these changes did not purge sexism and gender-based discrimination from the military. This is a key legacy of the early Cold War and the ideas preached by leaders like Wolcott.

The development of the ATB is part of a larger movement to better understand what military personnel need to do their jobs well. Uniforms are more than just the outer layers that most people see. Bras, in particular, are increasingly understood as an important functional part of women's clothing. In 2021, women on the British Olympic team got bras designed for them individually, based on research about how proper bras best support women athletes. The ATB prototypes are no different in concept, and their designers are focused on comfort and performance.

In 1957, the Yokohama "Battle of the Bulge" focused on bras as something that would help keep servicewomen looking good. Today, military leaders' attention to servicewomen's undergarments reflects a new focus on making sure all members of the nation's defense team are ready. It's a recognition that readiness can look different for men and women, even while acknowledging that gender should not be the main determinant of a service member's role.