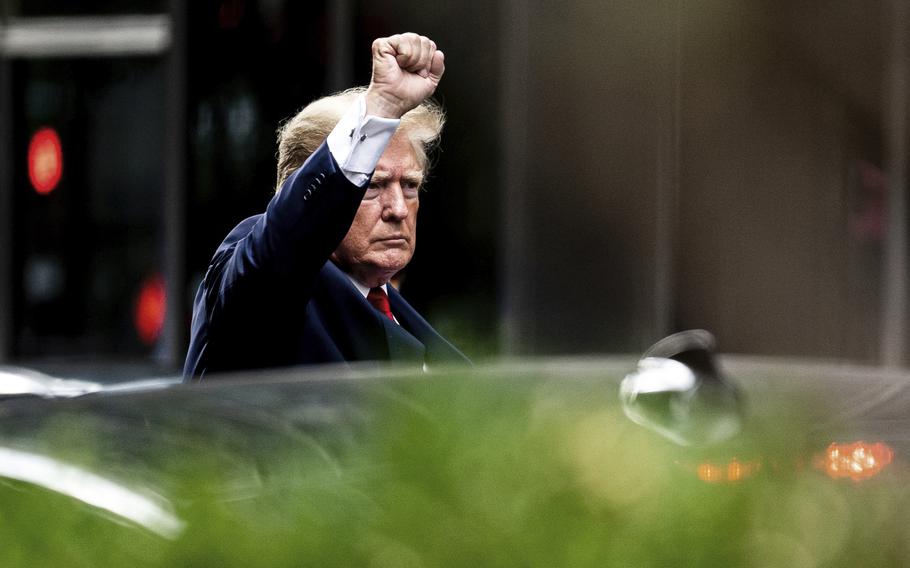 Former President Donald Trump gestures as he departs Trump Tower, Wednesday, Aug. 10, 2022, in New York, on his way to the New York attorney general's office for a deposition in a civil investigation. (Julia Nikhinson/AP)

Donald Trump has taken lots of public flak for invoking his Fifth Amendment right not to answer questions during his recent deposition by New York prosecutors looking into his finances. To the extent that critics have pointed to the former president’s hypocrisy, they’re entirely on the mark. But to the extent that they’re suggesting that Trump must have something to hide because he refused to answer questions, they’re following in a longstanding yet unsavory American tradition — one that Sen. Joseph McCarthy would readily recognize.

Although lawyers routinely advise their clients not to say a word to prosecutors, we tend to look askance at those who, in the parlance, “take the Fifth.” But one needn’t be a Trump fan — I’m certainly not — to understand that invoking the right to remain silent isn’t evidence of guilt; it’s a vital part of the relationship between the citizen and the state.

Nevertheless, although the historical origin of the privilege itself remains contested, it’s fair to say that long before the phrase “take the Fifth” existed, a witness’s silence was taken by the public as evidence of wrongdoing.

Back in the 1820s, when the New York legislature held hearings on whether certain banks had engaged in wrongdoing, a witness who refused to discuss his involvement in crafting a particular document was arrested and carted off to Albany’s city jail. During a 1911 probe of the role of Texas breweries in battling local prohibition laws, newspapers decried the refusal of several witnesses to say under oath whether they took bribes. The investigators announced plans “to force answers.”

An unsigned 1922 article in the University of Pennsylvania Law Review captured the view of many critics in coldly rejecting the notion that the right to avoid self-incrimination possessed any value: “The privilege which exempts the accused from being compelled to give evidence is extremely undesirable at this time in that it unquestionably shields crime and offers protection for the guilty criminal.”

But it was the Communist witch-hunts that followed World War II that firmly fixed in the popular mind the notion that asserting one’s privilege against self-incrimination was the pusillanimous act of the guilty. In 1948, for example, the House Un-American Activities Committee warned that invoking the Fifth Amendment was part of the “new and clever conspiratorial tactics” used by Communists to “conceal their espionage activities and their disloyal purposes.”

Leading members of the bar pronounced similar views. A prominent California lawyer argued that a witness could not use the Fifth Amendment in response to being asked if he was a Communist, because being a member of the Party was not a crime: “[H]e cannot use the Fifth Amendment to save himself from a personal ordeal, no matter how trying or repulsive, unless the answer to the question would actually tend to incriminate him.” So if the worst that might happen was that the witness would, say, become unemployable, the privilege did not apply.

The actual phrase “taking the Fifth” and its equivalents date to that era. Although its earliest usage seems to have been by witnesses who tired of repeating “I invoke,” the term quickly became derisive. In April 1954, for instance, McCarthy complained in an interview that many people “who have backgrounds of Communist activities” would refuse to testify before congressional committees. “If they act like those in the past,” McCarthy lamented, they “will even take the Fifth Amendment.”

The frustration of congressional investigators often led to sharp exchanges, as later that same year, when a publicist named Alexander Sherman was asked by HUAC about his work on behalf of the Hollywood 10. Sherman responded: “I’m afraid I must take the Fifth Amendment on that” — to which Harold Velde, the committee’s chair, shot back: “You are afraid to take the Fifth Amendment?”

Those who relied on the privilege back then were often persecuted. They could face loss of employment and financial ruin. Happily, a few civil libertarians raised their voices in protest. The most prominent was Erwin Griswold, the dean of Harvard Law School, who published a series of articles in an effort to educate the public about the virtues of the Fifth Amendment.

The privilege against self-incrimination, he argued in one essay, is a part of the “right to be left alone,” designed “to tip the scale in favor of the individual against the weight of the state.” In another article, Griswold criticized Congress for calling witnesses they knew planned to give no testimony: “[A] legislative investigation is improper when its sole or basic purpose is to ‘expose’ people or to develop evidence for use in criminal prosecutions.”

To be sure, the great arguments of the McCarthy Era over the right to remain silent largely revolved around legislative overreach. But the same lesson applies when questions are being put by prosecutors: A refusal to testify shouldn’t be considered evidence that the witness did anything wrong, a rule that the Supreme Court in 1965 formalized for criminal trials. The rest of us should adhere to the same principle.

Again, none of this is special pleading for Trump. My fear, rather, is that whenever we deride the invocation of Fifth Amendment rights, we risk trampling on a vital pillar of our democracy.

Bloomberg Opinion columnist Stephen L. Carter is a professor of law at Yale University and author of “Invisible: The Story of the Black Woman Lawyer Who Took Down America’s Most Powerful Mobster.” This column does not necessarily reflect the opinion of the editorial board or Bloomberg LP and its owners.