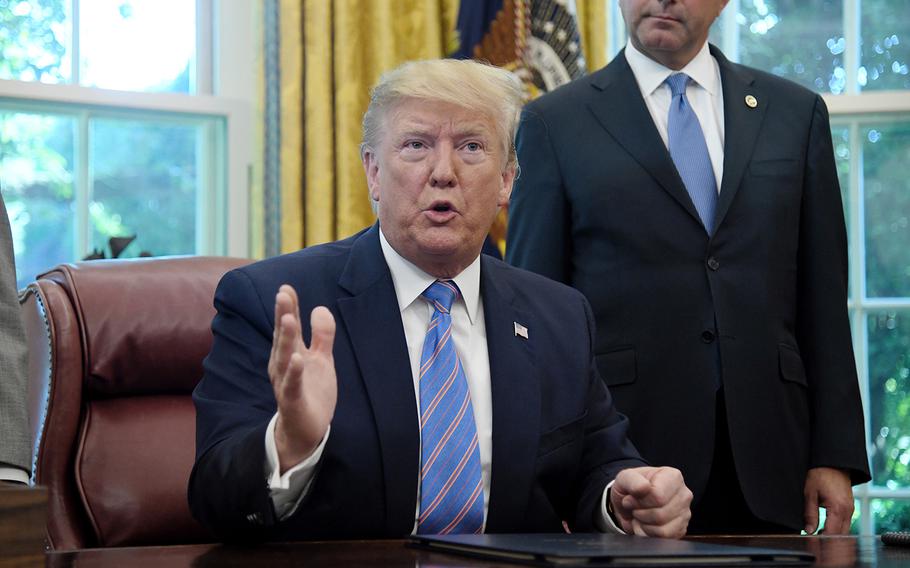 President Donald Trump during a signing ceremony in the Oval Office of the White House on July 1, 2019 in Washington, D.C. (Olivier Douliery, Abaca Press/TNS)

Even before Donald Trump disclosed that the FBI searched his Mar-a-Lago home in Palm Beach, Fla., on Monday, the day brought new revelations about his presidency, ranging from more evidence of his casual disregard for the law — toilet edition — to the military’s efforts to try to fight back against his moves to overthrow the election to his admiration for what he mistakenly believed was Hitler’s relationship with his generals.

The latter two items are from an excerpt of a forthcoming book by journalists Susan B. Glasser and Peter Baker that also contains the detail I found most fascinating. It’s what Trump told Gen. Mark Milley when the general advised him against hiring a “yes man” as his third White House chief of staff. Trump’s reply:

Trump wasn’t shy about letting everyone know that he basically thought of the presidency as an elected dictatorship. He considered pushback from anyone a personal affront, rather than just the normal workings of a complex political system. And unlike Cabinet secretaries and other agency chiefs, who are accountable to both the White House and Congress, senior White House appointees answer only to the Oval Office. That leaves the White House staff as the one place that presidents can hope for subservience and loyalty.

So while it’s possible to have a “yes man” as White House chief of staff, it’s also — I might as well be blunt here — an incredibly stupid way of running a presidency. The reason is simple: When it comes to policy, presidents are mostly ignorant. That goes even for those with extensive experience, such as President Joe Biden; those who have worked hard to master the substance of the job, such as Bill Clinton; and even those, such as Richard Nixon, who qualify on both of those counts.

There is simply too much to know. In just the last two weeks, the Biden White House has had to deal with China and Taiwan; Russia and Ukraine; NATO expansion; burn pits and veterans’ health care; support for the semiconductor industry and basic science research; terrorism in Afghanistan; violence between Israel and the Palestinians; negotiations over Iran’s nuclear program; gasoline prices and inflation and jobs and economic growth and interest rates; the filling of judicial and executive-branch vacancies amid confirmation fights for some nominees; and climate and taxes and health care. And that’s just what has been in the news recently; other issues have surely required presidential attention during that time span, let alone over four years in office.

Many capable politicians can understand the gist of all these things; no single person can have in-depth knowledge of even most of them, let alone all.

When it comes to dealing with the president, the people who have received good reviews as chief of staff have made sure that presidents were exposed to a range of opinions. It isn’t wise when a chief of staff advances his or her own personal preferences and locks out other information the president should hear, as Donald Regan did when he was Ronald Reagan’s second chief of staff.

A skilled chief of staff will know who the boss is. But that doesn’t mean the job is simply to enforce the president’s whims (or some nutty idea he just saw on Fox News). It’s to make sure that the president is fully informed of the alternatives that White House experts, executive-branch agencies and other important players are supporting. That isn’t an easy needle to thread; obviously no president can consider every possible option on every policy question.

The White House staff, and ultimately the chief of staff, have an important and difficult job of narrowing down what to include and what to exclude. That process won’t be helped if they have to worry that the president will tear their heads off if they bring in unwelcome news or urge the president to consider uncomfortable choices.

While this would be obvious to many top executives, Trump never appreciated the value of different points of view. And as my Bloomberg Opinion colleague Timothy L. O’Brien has pointed out, Trump never really had much management experience in the first place.

Contrary to what Trump thinks, people aren’t good at being president because they have good intuition about public policy. Franklin Roosevelt wasn’t a brilliant economist. His expertise — the expertise of all good presidents — was politics. And not just, or even primarily, electoral politics. Certainly not the mythical connection many presidents believe they have with the people. Instead, it’s politics more broadly: the interplay of politicians and other officials in and out of government, their interests, their constituencies and their institutional incentives, and the way that interacts with particular policy choices and other actions.

Good chiefs of staff can’t substitute their own political expertise for that. But they can help. If, that is, they have their own independent judgment and the good sense to use it for the president, rather than just echoing everything the president says.