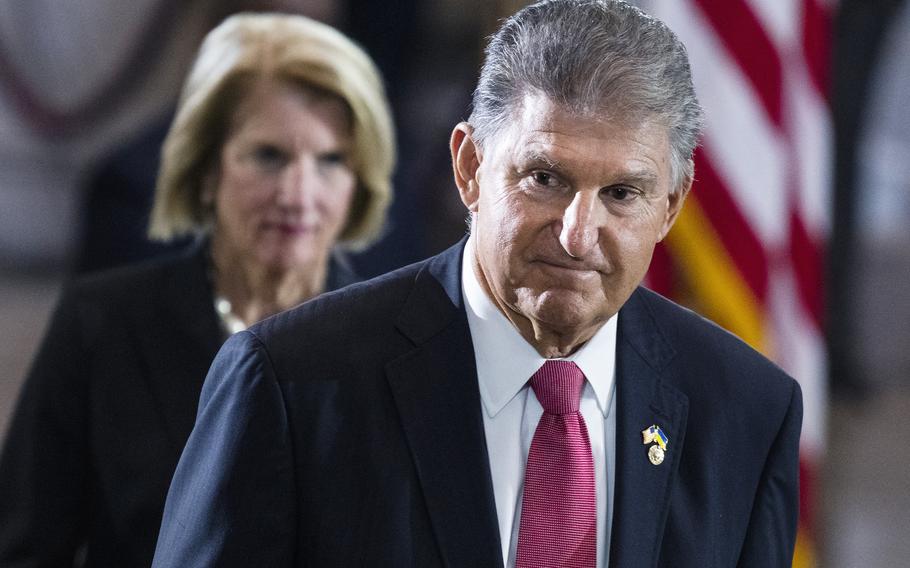 In the end, after a lot of drama, Sen. Joe Manchin, D-W.Va., did the right thing. And by signing off on a legislative deal that will reduce the deficit, cut drug costs and invest in zero-carbon domestic energy, he has made many progressives very happy.

What progressives need to do now is reconsider their churlish attitude not only toward Manchin, but also toward Manchinism. Democrats would benefit from more Manchin-type candidates running in other states.

West Virginia is not just a conservative state; it is practically the most conservative state in the country. President Joe Biden won 29.7% of the vote there in 2020, his worst performance in any state except Wyoming. If a Democrat can win in West Virginia based on a strong local brand and being more conservative than Biden, then why not in Kansas, Montana, Missouri or Indiana, where Biden got 41% of the vote? Why not Ohio or Iowa (45%), Texas (46%), Florida (48%) or North Carolina (49%)?

Democrats, of course, try to win in those last five states. But candidates such as Tim Ryan and Val Demings run as essentially mainstream Biden Democrats (in Ohio and Florida, respectively). That’s fine by me — I like the president. And I like Ryan and Demings. They’ve both charismatic, they’re running smart campaigns, and I expect they’ll both somewhat outperform Biden’s local approval rating. But they’ll still probably lose.

It would be interesting to see more candidates in red states define themselves as “Joe Manchin Democrats,” drawing fundamental distinctions between their views and Biden’s.

Before last week, many liberals talked themselves into the view that Manchin is a crypto-Republican and that anyone who’s more conservative than Biden must be the second coming of Mitt Romney. But this is nonsense. Progressives, by their own estimation, have a genuinely sweeping vision for the transformation of American society. They want to remake the U.S. energy system. They want a European-style welfare state. They want a unionized economy. They want to overturn American gun culture.

They want a lot of things! And there’s nothing wrong with having huge ambitions. But when your ambitions are enormous, it means there’s a lot of scope for people to have smaller ambitions without being doctrinaire conservatives.

And that’s Joe Manchin. He acknowledges the science of climate change and thinks rich people should pay their fair share of taxes. But he does not really buy into the notion that there should be a sweeping transformation of American society. That’s a perfectly reasonable worldview, and the presence of members of Congress who favor some change is useful to those who favor lots of change.

The biggest problem with Manchin is that there’s just one of him. So Democrats have zero margin for error on anything.

The point here should be obvious: A senator who agrees with progressives about a few things is much better than a senator who agrees with them about nothing. But this wisdom has been lost in the wind. Democrats running in red states happily distance themselves from “the Squad” and obviously toxic ideas like defunding the police. But the red states are places that, by definition, rejected not only Sens. Elizabeth Warren, D-Mass., and Bernie Sanders, I-Vt., but also Joe Biden. To secure the votes of people who backed Donald Trump twice, Democratic candidates need to agree with Trump about some things.

This is anathema to most progressive intellectuals and activists, of course. Many of them consider Biden himself a distressingly moderate alternative to their favorite politicians.

But that’s why the left ought to pay more attention to the genuinely enthusiastic reaction on their own side to the announcement of the Inflation Reduction Act. This bill is tiny compared to progressives’ grandiose ambitions. At the same time, it’s a huge improvement on the status quo.

Passing it would count as a victory rationally and feel like one emotionally.

And it’s the presence of Manchin that makes all this possible. His presence in the caucus ought to be celebrated rather than tolerated, and recruitment efforts in tough races should deliberately focus on building a team of Manchinist candidates who put clear distance between themselves and mainstream Democrats while also adhering to some progressive positions.

That would mean returning to something more like the pre-2014 era, when the Democratic caucus had distinct conservative and progressive wings, with most members somewhere in between. More recently, the progressive bloc has grown and the conservative wing has shrunk.

That’s provided a boost to progressive egos. But as last week shows, ultimately even hardcore ideologues prefer getting things done to accomplishing nothing. And that means more Manchins — and more Manchinism.

Matthew Yglesias is a columnist for Bloomberg Opinion. A co-founder of and former columnist for Vox, he writes the Slow Boring blog and newsletter. He is author, most recently, of “One Billion Americans.” This column does not necessarily reflect the opinion of the editorial board or Bloomberg LP and its owners.