Beware the nested games of Russia's war against Ukraine 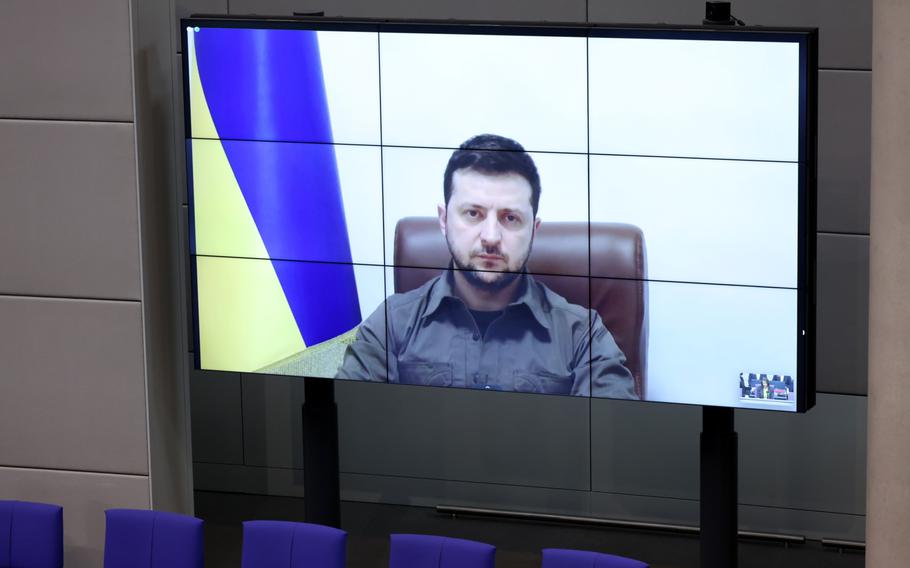 Volodymyr Zelensky, Ukraine’s president, via video link at the Bundestag in Berlin on March 17, 2022. (Liesa Johannssen-Koppitz/Bloomberg)

"Beware the nested game." It is one of the least-known but most useful adages to keep in mind when following international affairs, and it is especially relevant now that Lithuania has announced a blockade of sanctioned Russian goods.

A nested game is what it sounds like — a game within a game. It recognizes that the actors in most real-world settings are not unified and have conflicting motives. The classic example is the failure of a proposed Middle East peace deal because some hard-line faction sponsored a terror attack or an assassination. The agreement was never just the two sides dealing with each other; each side was also dealing with its own internal conflicts.

The nested game theory can help increase understanding of the Russian war against Ukraine too, and unfortunately it shows that the risk of escalation is increasing. Most assessments of the war measure the relative military strengths of each side. That is surely important — but so are the nested games. Russia and Ukraine are not monolithic. Each country encompasses many diverse interests and opinions, especially if "Ukraine plus its allies" is defined as one side of the conflict.

Lithuania has announced that it would block rail shipments of sanctioned goods to the Russian exclave of Kaliningrad, an outpost of Russian territory surrounded by Lithuania, Poland and the Baltic Sea, with no direct land connection to the Russian mainland. Lithuania claims, not incorrectly, that such a blockade follows from EU sanctions against Russia.

Still, from Russia's point of view, it may feel like an act of war when a NATO member cuts off part of the connection between Kaliningrad and the mainland. Various Russian officials have threatened escalation and retaliation, while leaving the details vague. Russia also claims this blockade violates previous transport agreements with Lithuania.

If Lithuania had not imposed this blockade when it did, it is not clear the European Union would have forced it to do so (delaying or renegotiating EU pledges is hardly unprecedented, especially when pre-existing agreements with other countries can be cited). In this sense the blockade was a strategic decision on the part of Lithuania. One view of Lithuania's strategy is that it is forcing or inducing its allies to affirm their support, at a more rather than less favorable moment in the hostilities.

It's too soon to tell whether this is a wise strategy for Lithuania. But the point is that Lithuania's interests are not identical to NATO's, the EU's or the U.S.'s. Given some risk of Russian escalation, and in light of my view that punishing Kaliningrad is a low priority, I personally would have preferred if Lithuania had not made this decision.

Instead, by playing a nested game, Lithuania has made matters riskier for some of the other parties involved. Lithuania also has made the course of the conflict more difficult to predict, because hostilities could spread to the Baltics as well.

Now some of the smaller players in the region, especially those which fear Russia the most, may see advantages in escalating the conflict. It is the conventional wisdom that time is now on Russia's side, so smaller countries may feel a sense of urgency that, say, Germany does not.

Nested games tend to complicate rather than simplify situations. Is the disturbing agent here Lithuania or the U.S., as some suggest? What exactly are the splits of opinion within the Lithuanian government? What does Poland think about the timing of this possible escalation? Speaking of which, Poland has been playing nested games all along, as it faces ongoing decisions about how directly to be involved in supplying weapons to Ukraine, which can heighten the risk of Russian attacks in Polish territory.

Merely outlining all the different questions can be dizzying. In this way, the nested games theory functions as a kind of alternative to game theory and its vaunted ability to predict the future. But therein lies the danger too.

Game theory isn't always correct about the future, of course. But it is a useful discipline because it forces people to consider the worst possible outcomes. The risk of the nested games theory is that it can lead to an acceptance of the internal logic of a narrow faction or situation — and once wars get started, they tend to develop logics all their own. Throughout history far too many wars have spiraled out of control for reasons that appear arbitrary, nonsensical or simply unnecessary, but that make sense under a theory of nested games.

All of which is a way of saying that the value of the nested game theory is its explanatory power, not its predictive worth. And that once nested games take hold, the risks of escalation grow.

Tyler Cowen is a Bloomberg Opinion columnist. He is a professor of economics at George Mason University and writes for the blog Marginal Revolution. He is coauthor of "Talent: How to Identify Energizers, Creatives, and Winners Around the World."