To pay for the war, Ukraine needs the EU’s help to restart its economy 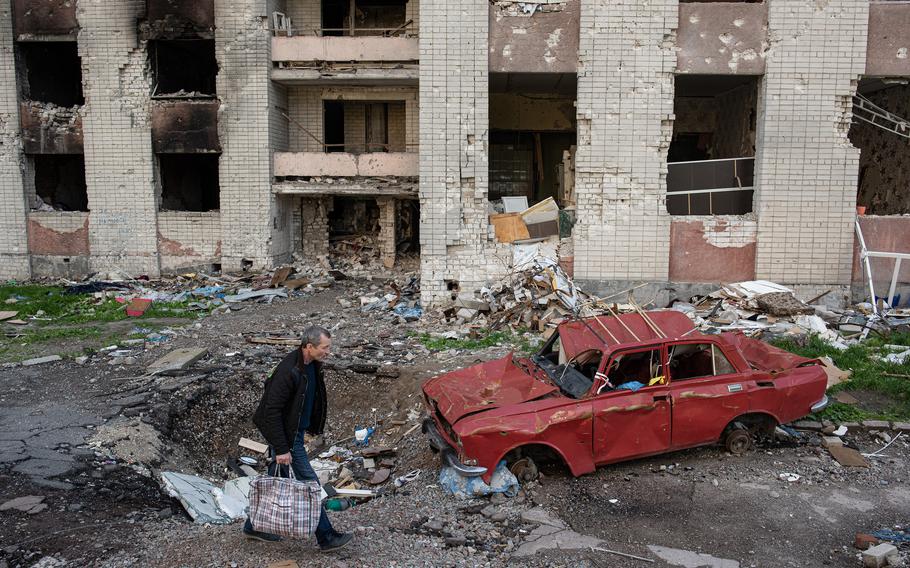 A man carries his belongings past a destroyed car next to a heavily damaged apartment building on May 28, 2022, in Chernihiv, Ukraine. (Alexey Furman, Getty Images/TNS)

Emmanuel Macron, president of France, recently expressed concern about not humiliating Vladimir Putin through a quick and comprehensive defeat in Ukraine. But he seems to have lost track of conditions on the ground.

The war will eventually come to an end, and Russia will not achieve its goals, but it will be a long struggle. To maintain this effort — which requires paying for the costs of war — it’s imperative to restart the Ukrainian economy and generate more tax revenue, even as the fighting carries on.

The good news is that the European Union, the United States and other allies have committed substantial resources to support Ukrainians, including when they leave the country as refugees. What is needed now is to adjust how those resources are deployed, to encourage these refugees to return home when it is safe to do so. This will help the Ukrainian economy and strengthen government finances.

In the weeks after Russia’s invasion on Feb. 24, a large proportion of the local population either moved westward within Ukraine and or left the country entirely. This was completely understandable given the anticipated violence. Subsequent missile attacks on civilians, the deliberate targeting of places sheltering children, and the horrors that happened in Bucha, Irpin and other places confirmed everyone’s worst fears.

More than 6.5 million Ukrainians escaped the country and found amazing support in neighboring countries, including EU countries, as well as non-EU countries such as Moldova and Norway. Taking care of refugees is expensive — they need food, shelter, schooling, health care and other services. Many countries have also provided daily cash allowances. Part of this cost has been borne with great generosity by individuals, but the budgetary cost to EU governments associated with taking care of more than 6 million refugees is at least 60 billion euros per year (about 10,000 euros per person).

Some of these refugees can work while outside Ukraine. The information technology and telecoms infrastructure of the country remains strong, despite Russia’s efforts to destroy these systems. As a result, people who can work remotely are able to earn income and, even more important, keep the Ukrainian insurance, finance, customer service and other economic activities on their feet.

But many jobs in an economy such as Ukraine’s cannot be done remotely, and there is also a pressing need to rebuild roads, bridges, apartments and commercial buildings. The weather is good for construction, but this will not last long — within six months rain and cold will make it much harder to rebuild. Overall, on its current course, the economy is likely to decline by at least 40% this year compared with 2021 and, until the refugees return home, a sustained recovery is hard to achieve.

There is already a steady flow of at least 30,000 people returning to Ukraine per day. They and many more Ukrainians can be productively employed to rebuild and repair the economy, but the government is hard-pressed to support them and their wages. The government budget is already running a monthly deficit of around 5 billion euros to cover war-related spending. That’s why it would make sense to have some of the EU financial support for refugees made available to them when they return to Ukraine.

There are three potential ways to make this transfer. One approach is to let refugees bring their cash benefits back with them to Ukraine for a limited period, such as six months. Another is to provide additional resources to the government to hire more people for rebuilding work. Both these policies will pull more refugees home, but the process may be slow.

Easier and more effective would be for the Ukrainian government to use this funding, received from the EU, to create a temporary basic income program for all Ukrainians in the country. A modest cash grant program would help millions now struggling to feed their families stay in their communities and increase economic activity.

If half of the more than 6 million Ukrainian refugees were to return home, European governments could significantly reduce their refugee spending and redirect tens of billions of euros into uses that would have long-term benefits for Ukraine. Any such program could be wound down as Russian forces are expelled from Ukrainian territory and the economy stabilizes.

We don’t know how long this war will last. The devastation wrought by Russia’s invasion remains incalculable. Eventually, Ukraine, a country of around 40 million, will need international assistance and support to rebuild. Shoring up its economy and beginning that process should start now.

Simon Johnson is a professor at MIT Sloan and former chief economist at the International Monetary Fund. Oleg Ustenko is economic adviser to President Volodymyr Zelenskyy of Ukraine.