Politics have distorted Americans’ views of the economy

According to a recent survey, a majority of Republicans and a plurality of Democrats believe the United States is in a recession. The question is how seriously to take their complaints.

Most Americans probably do not know the formal definition of a recession — “a significant decline in economic activity that is spread across the economy and lasts more than a few months” — but they do know that current prices of gas and food are especially high, and inflation is rising the fastest in 40 years. At the same time, unemployment is below 4% and the U.S. economy continues to create new jobs at a rapid pace.

When it comes to the economy, Republicans tend to focus on the negative and Democrats on the positive. If the parties were intellectually consistent, it would be the opposite.

Think back to the presidency of George W. Bush. Republicans offered a consistent (albeit debatable) vision of economic success: an “ownership society” where net worth was relatively high, savings were high, and people relied on their own resources to deal with the vicissitudes of the marketplace. With secure property rights and high savings, momentary disturbances could be offset by individual economization. People could manage temporarily higher prices by consuming less or by seeking appropriate substitutes. The initial problem, to the extent there was one, was that not enough households had enough ownership and material resources.

The Bush administration never succeeded into turning the ownership society vision into reality. But fast forward to the present: Quite unintentionally, the pandemic has brought about the ownership society — a distorted and somewhat dystopian version. Household balance sheets have been remarkably strong and liquidity is high, in part because the pandemic reduced spending and in part because of the federal government’s fiscal policy response.

You might think Republicans would find this situation at least tolerable. Yet because they are not in power, they are emphasizing the negative aspects of the current economy.

Many Democrats are also inconsistent. The broadly Democratic approach to household well-being is to use subsidies and regulations to lower the prices of important commodities. Such programs might include food stamps, public and subsidized housing, and Medicaid. The theory is that high and volatile market prices in these areas are harmful, which creates a case for subsidies or in some cases direct provision.

These transfer programs, which many Democrats want to expand, have the longer-run impact of lowering savings rates. If unemployment insurance and Medicaid are made more generous, for instance, the demand to save will go down, because government will be picking up more of the tab.

At the risk of oversimplification, it can be said that the Democratic ideal is one of low prices, with government helping to block or blunt large price increases for household products. Under this ideal, robust household balance sheets are not a priority, as many of the preferred policies would lower savings rates.

You might then think that Democrats would view the current mix of high savings with high and volatile prices as pretty disastrous. Yet the apologists for the current economic situation are more frequently Democrats. Paul Krugman, for instance, has argued repeatedly that there is a huge disconnect between how people portray the economy and how they actually are doing. In essence, he thinks there is too much complaining.

So who is right? Is America’s economy something to be happy about, or not? There is no simple answer. I will say that I have noticed that many people quickly internalize wealth gains and focus emotionally on losses, such as higher prices for many consumption items.

But in at least one sense, the optimists are correct. A few years from now, some of the added wealth to household balance sheets will remain. At the same time, prices for food and energy may well have returned to more normal levels. Happiness levels should rebound.

Such a future may feel too distant and uncertain to make Americans happy now. People are myopic, and discount the future excessively. That is a reason for policy to lean the other way — which may mean that there is something to the vision of an ownership society after all.

Bloomberg Opinion columnist Tyler Cowen is a professor of economics at George Mason University and coauthor of “Talent: How to Identify Energizers, Creatives, and Winners Around the World.” This column does not necessarily reflect the opinion of the editorial board or Bloomberg LP and its owners. 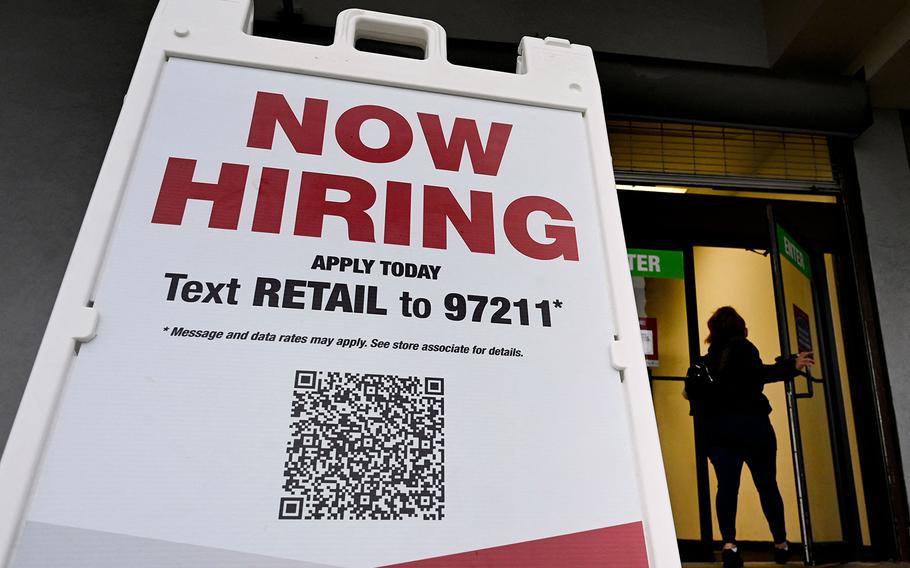 A woman walks past a “Now Hiring” sign in front of a store on January 13, 2022, in Arlington, Va. (Olivier Douliery, AFP via Getty Images/TNS)